You will experience neither heartbreak nor triumph when you read Shawn Michaels’ new autobiography. Instead, you will alternate from illumination to annoyance with alarming regularity. 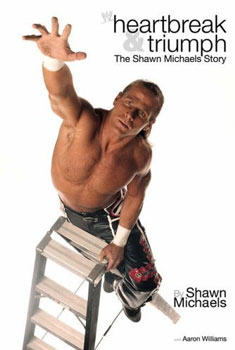 It’s just that it’s Shawn Michaels we’re talking about here. And it’s a Shawn Michaels that has found God and been born again, so it’s a preachy Heartbreak Kid, but he just can’t shake the arrogance and smarmy egomania that have identified him for so long.

This is not to say that Heartbreak & Triumph: The Shawn Michaels Story is a bad book by any means. It’s a good read, a complete look at one man’s life to this point. But rather than an autobiography, at times it feels more like a confession. Perhaps it would have been better titled Shawn Michaels Comes Clean.

I lost track of the number of times that he apologized for his past actions, or makes excuses for the way that he behaved. He was an absolute asshole at the best of times during his heyday, and, to his credit, he seems to be able to recognize that.

Early in the book, Michaels tells a good tale, talking about his childhood in San Antonio, football games, dreaming of being a wrestler and training with Jose Lothario. The details are nice, like remembering that it was $3,000 to train with Lothario, and what it was like hitting the road for his first match.

The stories about the AWA days with Jannetty sound too wild to be true, but given what I’ve had verified over the years from people who were there, including Jannetty in my book, The Pro Wrestling Hall of Fame: The Tag Teams, it’s all true. To say the least, it was a different time and place. Michaels is honest (can one be too honest?) about his shortcomings as a husband and as an employee of the AWA and other various promotions.

There’s not a lot of dirt, or true portraits of other people. Like the glory days of the Heartbreak Kid bringing a mirror to the ring, it’s all about Shawn. So when he ramps things up in the WWF and talks about his ascension to the top of the company, it gets even more self-involved. The book mirrors the way he was at the time, and seems truer.But hey, let’s be honest. Most people (especially Canadian fans) will want to buy this book for his side of the “Montreal Screwjob” in November 1997. Michaels and co-writer Aaron Fiegenbaum don’t disappoint on that front, jumping right into it at the start with a tease of what’s to come. Then when you get to the meat of it, Michaels reveals who knew about the betrayal of the champion, and when they knew it.

The Hitman is one person in the book that Michaels doesn’t apologize to; instead his stubbornness shines through completely. Like oil and water, Michaels and Hart just never got along, perhaps in part because both had egos that would make Barry Bonds shake his head in disbelief.

“Bret believed he was some kind of great role model, but he wasn’t. He was just full of it,” writes Michaels. “No sooner had he apologized than he went right back to bad-mouthing me. This was a pattern with him that drove me nuts. He would say things about me, apologize, and then go right out and say more bad things about me.”My biggest beef with Michaels’ take on the Montreal screwjob and Hart is that he missed the point of the Hitman’s success at the time. Hart was a heel on the U.S. side of the border for his bashing of Americans, and a beloved babyface on the Canadian side for saying all those things that we, as a nation, felt. That was the key to Hart’s rise at that point, and part of his argument about not dropping the title in Canada.

In Michaels’ written world, he is able to justify both the screwjob and his own refusal to drop the title when he famously went into the ring and announced that he had, “lost his smile.”

The Shawn Michaels who has written this book, however, has moved on from a lot of those mess-ups and bad decisions of the past. His description of his battles with pain prescriptions is quite harrowing. Then to couple that fight with his second marriage (to former Nitro Girl Rebecca “Whisper” Curci), the birth of their first child and finding religion, it seems a miracle that he came through in shape enough to return to full-time wrestling. (His return gets short shrift, and ends after his WrestleMania 21 battle with Kurt Angle. So no talk about his heel turn to face Hulk Hogan at SummerSlam, which was Michaels’ most interesting work since his return.)

His handling of religion, fortunately, never does come off as heavy-handed. Michaels gives an honest explanation (excuse?) as to how he came to this point in his life. Is it preachy? A bit. But not to the level of Ted DiBiase or Nikita Koloff’s books (or, from what I’ve heard, the upcoming Bill Watts book).

Love him or hate him — and I lean towards the latter — there is no denying that Michaels has been one of the superstars of professional wrestling for the last two decades. And, in Heartbreak & Triumph: The Shawn Michaels Story, there’s plenty to love, and plenty to hate.