This time next weekend, Tom Harriman will be breathing a lot easier. After all, his Legendsmania fan fest in Atlanta will be done, and he’ll be able to rest … until the next one.

“We want the fans to be looking at us saying, ‘When is your next show, because this is the best I’ve seen.’ That’s what we’re looking to do, and we want to provide that environment from beginning to end,” Harriman told SLAM! Wrestling, while in preparation for the big weekend, March 12-13, at the Sheraton Gateway Hotel in Atlanta.

With regular fan fests in and around New York City, Charlotte, and a few here and there in Florida and California in recent years, Harriman sees Atlanta as new ground. 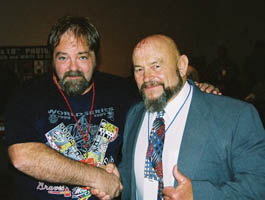 “No fan fests of any kind have ever been done in Atlanta, strange as that may be. As big as Atlanta was for the wrestling industry, you’d think that someone would have been tearing up this market, but they’re not,” said Harriman, who lives just outside Atlanta.

LegendsMania is focused on tag team wrestling, and is bringing in a whack of prominent teams, both for the V.I.P. meet and greets, and through vendor guests.

“Our company is called Tagteam Promotions, and we felt the first show we do should be a tag team related show. I think it’s just appropriate,” said Harriman. “Our shows are all theme-based, and we have shows already planned for the future with different themes to them.”

Consider the prominent teams that will be there:

Harriman admitted he is most excited about Putski and Santana. “I grew up in New England and the WWWF is what I grew up on wrestling-wise,” he said, adding another team. “A lot of the guys I do know and have met over the years, and have some relationships with. But those guys, I’ve never met either one of the High Flyers, Brunzell or Gagne.”

Aside from the usual lining up to meet the legends, Legendsmania has a few other unique things, including Johnny Valiant’s stand-up comedy and a performance by the Iron Mullet band.

Many fans won’t recognize the wrestling connection with Iron Mullet, but it’s there. The lead singer is Dr. Craig “Iron Yoga Doc” Aaron, who is the co-creator of the Yoga for Regular Guys idea with Diamond Dallas Page, and he was the chiropractor for WCW for years, and still helps WWE when they come to town. “He’s got a tribute band and they come out and do a full gimmick,” said Harriman. 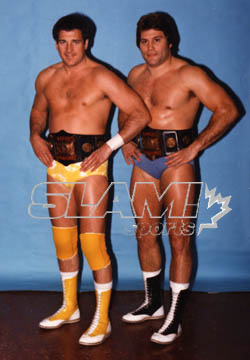 A manager in the automotive repair business, Harriman has been a fan since his early days, and remembers seeing Ivan Koloff beating Bruno Sammartino. As a fan, he has been to a number of fan fest, and found that while it was always great meeting the wrestlers, the overall experience wasn’t always great. “There was so much dead time, so much waiting,” he explained.

He and his partner in Tagteam Promotions, T.C., have coined the motto, “To the fans, for the fans, by the fans,” to drive their business.

They plan on another Atlanta show in October, and perhaps one to coincide with WrestleMania in 2011.

There have been decent pre-sale on tickets, said Harriman, but he’s optimistic that walk up will be great. “The response I’m getting is, ‘Oh, I’m so glad it’s in Atlanta. I can’t wait. It’s about time.’ Those are the responses from the fans I’m getting, and it’s all local people. We’ve just saturated our local area as far as advertising, flyers and radio spots and whatnot. We’ve gotten great response so far, but I think the bulk of what we do will be walk-up, I really do.”