“The Pope” D’Angelo Dinero has a warning to his partners, Matt Morgan, Hernandez and Suicide, for their eight-man match against Team 3D, Rhino and Jesse Neal at the TNA Final Resolution pay-per-view on Sunday — don’t trust him.

After all, he may be aligned on the side of the heroes, but that doesn’t make him one.

“Right now, I don’t know if I would call Pope a good guy per se, a babyface per se. Right now, the fans have caused the Pope to align himself with some people that don’t necessarily do things Pope’s way, because you guys consider it the right way,” Dinero explained earlier this week to SLAM! Wrestling. “It’s circumstances. I could care less about Suicide. I could care less about Matt Morgan or Hernandez, because at the end of the day, I may have to stand across the ring from them, and when Pope stands across the ring from them, it’s going to be the same result, they’re going to have to go through the same thing — they’re going to get run over by the DDE, the D’Angelo Dinero Express if necessary.” 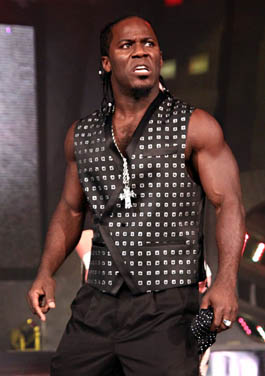 Confidence has never been in short supply for Dinero, whether during his current run in TNA or in WWE as Elijah Burke, his real name.

It’s the same for Sunday’s PPV.

“There’s a youth movement that’s going on within TNA. It’s been spearheaded, of course, by myself, The Pope, Matt Morgan, Hernandez, Suicide,” he said. “We’re going into this eight-man war with these veterans. We’re going to go in there and kick some butt, and come out on top. I think Final Resolution is going to be another epic pay-per-view, top quality, great wrestling, great action, a little something for everyone. I think at the end of the day, everyone’s going to be happy with the results.”

All in all, Final Resolution is a pretty stacked card, and includes O.D.B. vs. Tara for the Knockouts title, a best-out-of-three falls “Three Degrees of Pain” bout between Kurt Angle and Desmond Wolfe, The British Invasion (Brutus Magnus and Doug Williams) vs. The Motor City Machineguns (Chris Sabin and Alex Shelley) for the tag titles, Scott Steiner vs. Bobby Lashley in a Last Man Standing match, and a Feast or Fired match that will include Samoa Joe, Robert Roode, James Storm and one more competitor.

But The Pope says it’s the TNA World Heavyweight Championship match that has his attention.

“I think all eyes will be on Christopher Daniels and A.J. Styles, because those two competitors know each other very, very well,” he said. “Everyone who’s a fan of TNA is very much aware of the epic battles that they have had over the years. These two guys, they can go, man. They’re poetry in motion, their stuff, their moves, their athleticism, their ring awareness. It’s just great. I think all fans will be looking forward to that. I know I am.”

During the conversation with SLAM! Wrestling, Dinero also detailed his thoughts on the upcoming Hulk Hogan-led regime, some of the things that turned him off about WWE, and his long-term TNA deal. That story will run next week.

For now, Dinero wants to concentrate on the PPV: “You guys be sure to tune into TNA’s Final Resolution pay-per-view December 20th to see Pope — Pope D’Angelo Dinero, Matt Morgan, Hernandez, and Suicide put a whooping on Team 3D and their raccoons.”