The Pope pontificates on TNA, WWE and family

With the Final Resolution pay-per-view in the rear-view window, TNA looks ahead to a new era, led by Hulk Hogan and his friends, like Eric Bischoff. “The Pope” D’Angelo Dinero is one of the TNA stars who is upbeat about the new regime.

“Right now, the feeling is, ‘Let’s wait and see what’s going to happen,'” Dinero told SLAM! Wrestling. “Everyone is optimistic and everyone is excited about what’s about to go down, because, truth be told, with the Hulkster coming in to TNA, it’s already serving its purpose, and that’s to garner attention in mainstream media, to get TNA more out there, knowing that the publicity is an important part of TNA’s growth. It’s doing its part right now.” 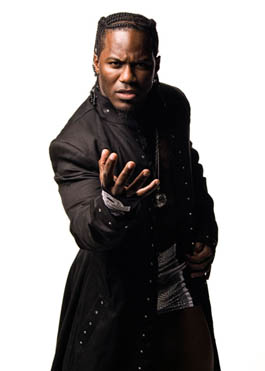 “The Pope” is hardly shy about his opinions, and a sly dig or two slides in during the 20-minute conversation.

“Of course, when the old man in the yellow boots arrives down there in TNA, and goes in to to cut his 20-minute, 25-minute promo, I believe everybody is just going to sit back and see what happens,” he predicted.

While making the media rounds, Hogan has been addressing his role within TNA — it won’t be wrestling in the ring, he has been stressing. The Hulkster has been targeting the reliance on writers to script the shows rather than allow the wrestlers to show their stuff.

Dinero, for one, is on board with that idea, especially in the third person.

“I couldn’t agree with the old man, the Hulkster, I couldn’t agree with him any more than that, because one thing that Pope understands about this business is that writers cannot talk for you,” Pope said. “I believe anybody that has watched Pope on screen with a microphone, on screen with a camera, talking, enlightening and delivering the message like only Pope can, I believe that everybody knows that Pope ain’t scripted. And that’s a very important part of this business. Even when Pope has tried to be scripted, Pope has changed the script himself, because Pope likes to go out there and just fly with it, flow with it, and just be real. Can’t nobody be Pope, because I’m Pope — so you can’t tell Pope what Pope’s going to say, either. You can’t even think, you can’t even imagine what Pope’s going to say, and that’s a great part, one of the fantastic things I feel that many like to witness, that’s what is he going to say next? Hey, this man has drawn money in this business for 20, 30 years. He knows what he’s talking about.”

It will be an ongoing battle with WWE, said Dinero. “It’s not going to be ‘try.’ TNA, we’re about to shake up the wrestling industry, on a bigger scale at this moment. We will compete with WWE on Monday nights. It’s groundbreaking, brother, to have witnessed it, as a fan of the Monday night wars, and now to be a part of what’s going to be the second one,” he said.

The initial TNA Monday night show is scheduled on Spike TV on January 4th. “Look here, Pope ain’t no psychic, but Pope does have prognostication capabilities, and I’m telling you, TNA will be going head to head with Monday Night Raw on more than just one occasion. Take that, and when that happens, you can say Pope said it first.” 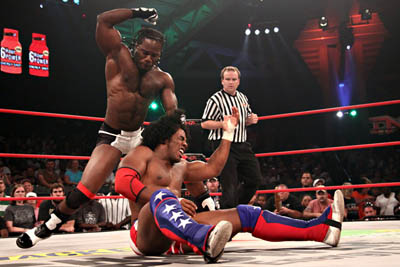 Dinero lays one in on Consequences Creed.

Pope truly believes that other WWE stars will be coming on board with TNA.

“When the old man with the yellow boots says that he’s been getting calls from the other place, and there’s some people trying to get on, that’s not just Hogan talking. That’s Hogan telling the truth, because even Pope is getting phone calls about what it takes, what’s going on down there, because some folks want to jump ship. When I tell you this war is about to start, because this war is about to start, and it’s going to fully finish. There’s so many people right now with them other guys that are really, really unhappy, man.”

Having only been in the wrestling business a half-dozen years now, Elijah Burke has come a long way. The former amateur boxer and officer in the Sheriff’s office in Jacksonville, Florida, quickly moved up the ranks in the WWE-affiliated Ohio Valley Wrestling, and was promoted to the Smackdown, and then ECW brands, where he was a mainstay in the program’s early days. He challenged for the ECW title, but never broke through to championship status.

When he talks about his past in WWE, he’s definitely more Burke than Pope, with a mixture of disdain with what-could-have-been consideration.

There is little doubt that he has found new life in TNA as D’Angelo Dinero, a name coined by writer Vince Russo. “Number one, I’m glad that when we were in negotiations that my name, Elijah Burke, was chose not to be used. Being that Pope had been around for two years prior to my signing with TNA — not D’Angelo Dinero, just the Black Pope — I just decided to have Pope step out front now, for Pope to do his thing. Going to TNA, I hadn’t made, had I come across from the other side of the pond being a former champion, then obviously Elijah Burke would have been the way to go. But we hadn’t gotten to that point in WWE. So I wanted to start new, and I wanted to do my own thing. That’s what’s going down. Everything you see about Pope is Pope. Man, it’s great.”

Given how much Pope talks about Pope, it’s natural to wonder about that other Pope, the one in the Vatican. Dinero insists he’s gotten no hassle from Catholics, and doesn’t expect to. “Pope is just Pope. It’s just a name. Pope has got no sweat whatsoever. Unlike if Pope had debuted two years ago on ECW or Smackdown, Pope probably would have been coming out with a big Catholic Pope hat on, and a big Catholic Pope robe, and a Catholic staff, and everything would have went to hell because Catholics would have run amok with WWE, and then Pope would have been out of a job anyway,” he said with a laugh. “No. I think anybody watching knows that Pope is just a name, just like Nas, N-A-S, God’s Son, the rapper. It’s a name, just like The Prophet would be just a name. I think the fans get it. They realize that Pope ain’t about religion. They realize that Pope ain’t no preacher. Everybody knows that Pope be pimpin’, and that’s the key. It’s the play off the words, take a name and play off it.”

Having just signed a new contract with TNA — “Let’s just say that you’ll be seeing me well past 2015” — Burke is quick to praise the TNA brass.

“Listen, these people down in TNA, more specifically Dixie Carter, they are taking care of Pope,” he said. “Right now, I’m going to back up. You said, ‘Get some peace of mind.’ Brother, no politics. When I say none, I’m sure there’s some politics everywhere. But on the forefront, there’s no one literally walking around on eggshells in TNA, there’s no one trying to stab — openly at least — a brother in the back. Everyone knows what they are doing and they’re just happy to go out and do it with who they do it with. It’s one big family.”

He also appreciates being treated like an adult, which didn’t happen in WWE.

“It’s not just about politics. It’s just about being able to show up to work, not be micromanaged, not have someone stand out with a paper and pen, hiding behind a truck, taking your name down, writing the time that you arrived to work. Not having to run and sit in a certain seat because a top guy is sitting down, and if you’re not sitting down watching a monitor because a top guy is sitting down watching a monitor, you get heat. You know, stuff like that. I’m a grown man. I’ve got a job. Let me do my job that I came to do. I’m not in school. I don’t need to be monitored. You know, I can’t be on my phone backstage because someone is watching me, or saying, ‘He’s with the dirtsheets,’ or ‘He’s texting,’ or ‘What game is he playing?’ Not that that happened to me, but I’m just saying that’s the type of stuff that I believe that, it’s just causing a lot of people to be unhappy.”

At the TNA Bound For Glory pay-per-view in California, D’Angelo Dinero was scheduled to be a part of the Ultimate X match. A family emergency, however, derailed his focus and, in the dressing room, he went straight to the top.

“I just pulled Dixie aside and we talked. Dixie said, ‘You go and you take care of this. I have no problem with it.’ Even Russo: ‘If you want to go, we understand. Do your thing, Pope.’ That’s all it took. When they said that, Pope was gone. Pope was first-class all the way to Jacksonville, Florida, trying to be that rock for his family. Kudos to TNA. The management is just great, man, it’s just great. Dixie is always available. I cannot tell you how many times that, I mean, before I even signed this long-term commitment, I was already pulled into a room with Dixie, one-on-one, just having a sit-down conversations with her, and air some of my concerns and whatnot. This isn’t, you don’t have that opportunity in other places, you don’t have that opportunity to take the head of the company and say, ‘I need to talk to you. Can you give me a moment or so?’ You just don’t get that.”

The time off around Christmas is most welcome, he said.

“Pope’s just going to take his love, man, and just spread it tremendously, as he always does. Pope’s just going to be with the fam and stretch his arms and his heart as far as he can. I dealt with some recent family issues. Things haven’t been, some things have been shocking and depressing, but Pope won’t let it get him down. We’re going to cherish each other knowing that at any moment one of us could be gone. Tomorrow’s not promised to you. That’s what I like to do, and I don’t just do that on Christmas. Pope does that all the time. I cherish all my family members, all of my loved ones, every one of my friends as if this was the last time I’m going to see them.”