Final Resolution a ‘phenomenal’ ending for TNA in 2009

Final Resolution 2009 is the end of the pre-Hogan days in TNA, and with that in mind, the company ended its current incarnation with a bang, highlighted by a main event that, while lame duck, was a great bout between two men who’ve battled up and down the road for years. 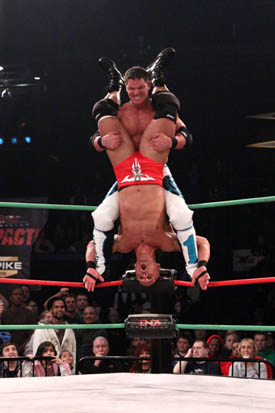 Yes, it was AJ Styles defending against Christopher Daniels for probably the 300th time in their careers, and this one was as good as any other they’ve had, if not the best. The bout started hot and heavy as we’d expect from these two with great mix of hard hits and strong shots.

As the match moves along, the moves get even fiercer, garnering Daniels one hell of a bump on his head at one point. The two do some great improv, working it in as a major focus of Styles’ battle towards the end of the bout. The fierce action continued through the BME and the Styles Clash, leading to a hot (although predictable) finish with a Frankensteiner reversal into the Styles Clash from the middle rope.

Let’s take a look at how everything else broke down, shall we?

More back-and-forth from these two than you tend to see in North American tag team matches. We get a good array of close finishes before the Brits hit a flying back elbow into a Powerbomb for the duke. 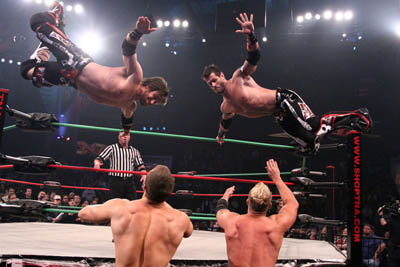 During the match, Tenay announces that there will be no TNA Impact broadcast on Thursday, and next week there will be an eight-Knockout tourney, along with the airing of the top three matches of 2009 in TNA. Yes, this announcement was more exciting than this rather pedestrian Knockouts bout. Tara ends up reversing a Fireman’s Carry into a roll-up for the win.

We then get a promo for the Monday night Impact episode.

Immediately after the match, Jeremy Borash announces that we’ll get the case openings after an interview from Christy Hemme with Kurt Angle and AJ Styles. The guys cut promos on their opponents tonight…and each other.

It’s case time. Borash and SoCal Val are up on the stage.

Samoa Joe is next, and gets the World Title shot, which gets a strong face reaction.

Bashir and Terry open their cases together, with Bashir getting the pink slip and Terry getting the X-Division title match. Bashir is rightly pissed and quickly leaves the scene.

Hernandez starts out on his own for five minutes (though the clock isn’t constantly on the screen until the final minute). Before the period ends though, Rhino is eliminated. The rest of the faces come out soon after. Neal at one point, uses a chair and isn’t DQ’d immediately but is later announced as gone, as opposed to Hernandez, who also uses the chair and is DQ’d immediately. Team 3D then eliminate Suicide with 3D and soon after do the same to Dinero. 3D then seem to have the upper hand before Morgan gets the Carbon Footprint on Devon for the elimination to take s to one-on-one: Ray vs. Morgan, which ends soon after when Ray tries to bring in a chair, and ends up eating it with another Carbon Footprint.

Winners: Morgan/Hernandez/Dinero/Suicide
Rating: 4/10 – I’m a sucker for Survivor Series matches. Not a bad match, but nothing special either.

Crystal is sent to the back before the match begins, which allows Scottie to get the advantage with Bobby distracted but the tide turns. Tazz points out during the match that Steiner appears to have hurt his knee during a T-Bone Suplex spot.

During the count, Steiner goes to get a pipe but before he can use it, Kristal takes it away and tosses it to Lashley (who misses the easy catch but recovers quickly with a spear to buy time). Lashley then uses the pipe and gets the 10-count.

Winner: Lashley
Rating: 6/10 – Solid bout up until the botch at the end.

6> Raven/Dr. Stevie vs. Abyss/Mick Foley
Before the match, Mick makes it a “Foley’s Funhouse Rules” match, meaning there are no rules. At one point, Raven and Foley disappear backstage. This allows Abyss to gain near full control on Dr. Stevie. Raven rescues Stevie before he is sent through a table and the heels take control. Eventually, Foley returns with weapons, including the barbed-wire bat. The match then goes back-and-forth with near finishes and eventually Foley traps Stevie in barbed wire then uses the Foley Elbow to put him through a table off the rampway. Daffney gets involved in the ring action to no avail, as Abyss puts Raven away with the Black Hole Slam. 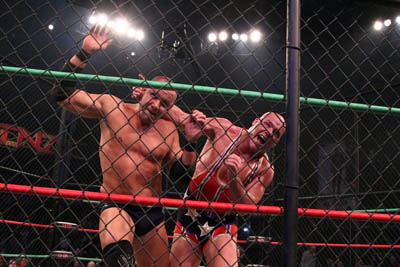 All three potential bouts are in the cage. The camera catches someone in the crowd, obviously intentionally, but the announcers don’t acknowledge it. Bad production there. Dueling fan chants near the start – a nice RoH carryover.

First fall (pin) shows off some great technical wrestling from both men before Wolfe nearly gets the duke with the Tower of London (to virtually no fan reaction). After a couple more close falls, Wolfe gets the pin after a second Tower of London.

Second fall (submission) sees the two very quickly go for the tapout before Angle gets the duke with the Ankle Lock.

We head then to the third fall (escape) and we really start to see just how special this match is turning out to be. Wolfe gets a NASTY cut and starts descending into Jericho SMW territory with the staining on the mat and his body. Wolfe at one point starts convulsing in a near passed out state and only wakes up as Kurt is halfway out the cage. The mad dash ends with Angle narrowly winning.

Winner: Angle
Rating: 8/10 – Great match, an easy contender for match of the year from TNA.

Winner: AJ Styles
Rating: 7/10 – Not quite an Match of the Year contender, but this was a fantastic bout to close 2009.

Overall Show Rating: 7/10 – I definitely felt like my money was well-spent tonight with three well-above average matches, especially by TNA standards. This is one that, if you missed, you should either get the replay of or pick up on DVD when it becomes available.