If every wrestler took the time to write a 26-page description of their life in and out of the ring to share with “our grandchildren, and our family, or whoever may dare read it through,” then writing an obituary would be a simpler task. Paul Gibson, who died from cancer on Sunday in Hamilton, Ontario, at the age of 80, was such a man.

His memoir, written for friends and family in 2004, is a charming and revealing look at a youth who grew up in Greensville, Ontario, on a farm outside of Hamilton. He shares stories of growing up, what his parents were like, and his interest in sports. Naturally big, at age 15 — already armed with a driver’s license thanks to war-time concessions to the needs of the farming industry — he could lift his car, a Model T Ford coupe, bought for $50, off the ground. At age 16, he was already 220 pounds. “I was born strong … I wasn’t fast, I wasn’t smart, I just happened to be awfully strong,” he once said. 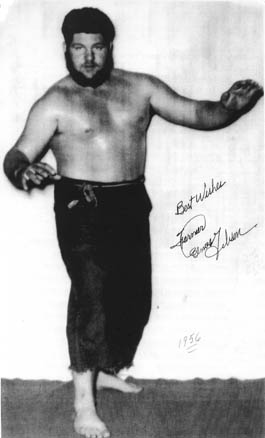 Gibson and his family befriended the up-and-coming Sharpe brothers, Ben and Mike, who would later be major wrestling stars. Mike Sharpe, in particular, became a close friend and workout partner of Gibson’s.

“My mother died when I was 17 and my dad was in shock. We used to go to the wrestling matches with my sister. Of course, Mike and Ben would be wrestling and I met them after the matches,” Gibson told this writer. “Mike, in particular, and his wife became very good friends with my sister and her husband. I was interested in wrestling. I’d been going for a while. I got doing a bit of weightlifting, working out in the gym. I met Mike at the Y and it went on and on from there.”

The twists and turns of life took Gibson away from wrestling for a bit, then right back into it. There was the time that, riled by the villain’s heinous actions, that Paul jumped into the ring; there was the opportunity to be put into Timothy Geohagen’s sleeper hold as a demonstration model.

“Farmer Elmer Gibson” made his professional wrestling debut in July 1951, in Wasaga Beach, Ontario, against his trainer, “Irish” Pat Murphy (Eddie Melowski), whom he had met while both were employed at the Westinghouse plant in Hamilton.

“I never made it famous, I never made any money, but I had a few memorable events in my time,” he said. 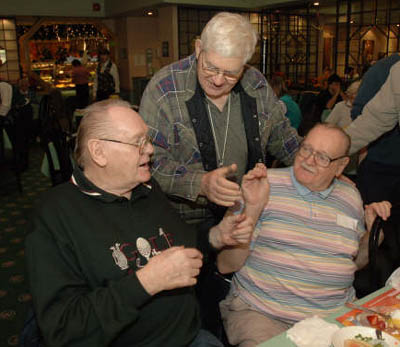 Over the years, one of his best friends would become Ernie Moore, who wrestled as “The Executioner.” Moore has been asked to speak at Gibson’s memorial service.

“I didn’t know how many matches he had, but he was always considered one of the boys,” Moore told SLAM! Wrestling. “He was well liked. He was a former policeman. Just an all-around good guy.”

Some of the “memorable events” related to wrestling that Gibson recounts in his memoirs include seeing Sandy Scott have his debut match in 1952, and being at the benefit show that same year for Sandy’s brother, George Scott, who had broken his back and was unable to wrestle.

In 1956, Gibson joined the Hamilton police department, and was there for 12 years. While on the force in 1959, he was involved in a motorcycle accident and hurt his back. His police memoirs were another major undertaking for the retired Gibson in his later years, numbering more than a hundred pages.

He was a part of the regular crew of Hamilton-area oldtimers that meet on a bi-weekly basis around town, including Moore, Reggie Love (Johnny Evans), Marty Valenti, Hurricane and Cyclone Smith (Bob and Maurice Grimbly), Ron Logue, Farmer Phil Buck, Roger Francoeur, Jerry Dorsey, and others. Billy Red Lyons was a constant until his passing earlier this year.

“Regardless of what one might think or say about wrestling as a profession, some of the most interesting and likable people I met throughout the years were men who ventured into the world of wrestling,” Gibson concludes in his memoir.

Having shared his wrestling memoirs with this writer, Gibson confessed that it was a “gratifying experience … when you start reflecting on the past, a lot of things come up.”

Paul Gibson is survived by his wife, Gloria, and their four children and grandchildren. Visitation will be held at the Church of Jesus Christ of Latter Day Saints, Main Street East at Emerald Street, Hamilton on Tuesday, December 22 from 2-4 and 7-9 p.m. Funeral services will be held in the chapel on Wednesday, December 23 at 11 a.m. with interment at White Chapel Memorial Gardens.