A man who Jim Ross calls the greatest wrestling play-by-play man ever, Gordon Solie, left behind a legacy that can finally be told nine years after his death. The Solie Chronicles, a biography put together by Gordon’s daughter and son-in-law, Pamela and Robert Allyn, tells the tale of a wrestling play-by-play who found success both inside and outside the wrestling world. 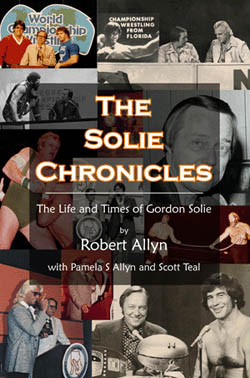 The book is a collection of articles and stories from Solie’s estate. Solie began to work on the book but as health issues arose leading to his death in July 2000, he was never able to complete the book.

“He left all of his writings to Pam in hopes that the two proposed books would be written posthumously,” Robert Allyn told SLAM! Wrestling. “After Gordon’s estate was settled, Pam and I began to organize Gordon’s writing files into a catalogue and subject format.”

When all the information was gathered, the two decided to put together two books. The first book, Gordon Solie… Something Left Behind, was released in early 2005. It was a collection of short stories and poetry from Solie. (A kayfabe autobiography of Solie’s, Master of the Ring, was put out in 1984 with writer Dee Forbes.)

They took the initial manuscript to Scott Teal about two years ago. Teal, along with wrestling historian J Michael Kenyon, made some editing suggestions. Robert and Pamela put another year into the book before its final form.

Solie announced stock car races in the 1950s and 1960s in Florida. He would later become involved in ownership of tracks and racing tours. The book initially had a large section dedicated to Solie’s life in stock car racing, but was later edited for space.

The book could have been larger, according to Allyn. “By 2004 we had over 1,900 files in a catalogue index and a subject index that was 140 pages long for the ‘Gordon Solie Collection.’ That was our base to work from and it continued to grow as we went along.”

The book chronicles Solie’s life off-camera. A man who was devoted to his wife, Eileen, for 37 years, he was a well-known drinker and smoker. The two would later assist in taking his life, after liver problems and cancer took over his body in the years following his wife’s death in 1997. Solie would have his cancerous vocal cords removed, making the greatest wrestling play-by-play announcer voiceless.

His marriage to Eileen was his second, with co-author Pamela Allyn coming from his first. She is able to bring a first account of Solie’s estrangement from her after the divorce, something that carried through until his final years.

Solie was a man who called wrestling as a sport, but as the sport evolved into entertainment, Solie became disenchanted with the sport. He helped build the careers of Dusty Rhodes, Ric Flair, Kevin Sullivan and others, but had trouble doing the same for Oz, Shockmaster and P.N. News.

The book ends with a closing letter by Solie, written shortly before his death. The letter closes with his famous words, spoken at the end of each broadcast of Championship Wrestling from Florida, saying “So long … from the Sunshine State.”

The book is maybe the most detailed wrestling biography ever written. The authors pieced together stories with interviews from dozens of people who crossed Solie’s path. Allyn, though, wishes he could have included a few more.

“Yes, it would have been nice to interview Hulk Hogan. During the time that we were trying to complete interviews with people on our list, Hogan was going through the heat of his divorce so we opted not to bother him.”

Allyn also notes that he wish for comments from Flair and journalist David Skolnick. But Allyn believes the book a complete biography of Solie.

“Overall, we are thrilled with the interviews in the book and appreciate that so many people who knew Gordon were willing to share their memories.”

The book is a must-read for any serious fan of wrestling. The book is built in such a way that it can be read in small sections or even out of order. An index gives the reader a good reference to read particular stories about specific topics, wrestlers or events. Also many rare photos and notes are within the body of the book, bringing a little something extra to the words written.