Just as Howard Cosell made Muhammad Ali into a bigger star and cultural icon, so did Gordie Solie affect the life of ‘The American Dream’ Dusty Rhodes.

In conversation with SLAM! Wrestling Friday night, Rhodes was subdued, reflective on his experiences with Solie in Championship Wrestling from Florida, and later in the Crockett’s NWA / WCW circuit. “He helped create the American Dream persona, make it alive on TV. My hat’s off to him.” 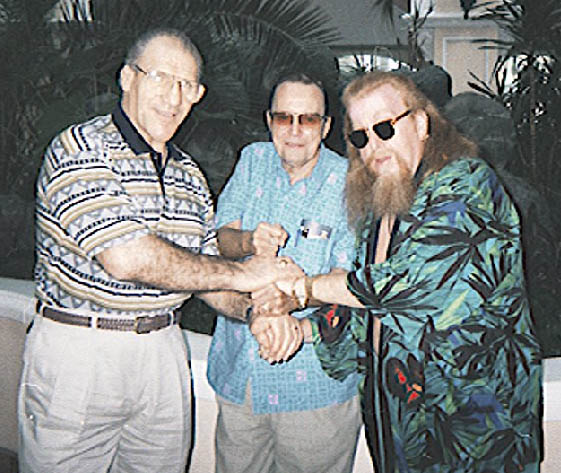 “In the ’70s, my fondest memory was calling ourselves the Howard Cosell and Muhammad Ali of the wrestling industry,” Rhodes said. “We had a run together, television-wise, that was so unique because he was the best call of a match. Ever. If I was going to compare somebody to him today, it would probably be Jim Ross if anybody could come closest, touch him.”

Rhodes recalled that the business in the ’70s thought that playing ‘kayfabe’, keeping the inner workings of the business a secret was so important that Solie was kept out of the loop by Florida promoter Eddie Graham.

“Eddie Graham, his mentor, would never make him privy to what was going on as far as what was going to happen on TV,” Rhodes explained. “So he had to really call it. Solie was out there, ‘the crimson mask’, the whole thing. He made up great cliches that will live forever. He was a pretty cool guy.”

Kendall Windham was one of those young wrestlers who came along in the 1980s after the business had gone more mainstream, more towards sports entertainment. The son of Blackjack Mulligan and brother of Barry Windham recalled that when he started, Solie was quick to help out the youngsters.

“He always helped you out,” Windham said. “It was his job basically to help you get established and he would get you established. He did his job very well as announcer, commentator for Florida Championship Wrestling.”

Solie was a professional’s professional when it came to announcing. “He was always on top of the game. He always knew what to say to help get guys over,” Windham recalled.

Gil Hayes was in Florida in the early ’70s and recalled Solie as “one of the most colourful for the era of professional wrestling. He always had good taste, dressed well, well-spoken and gave the business a little class.”

“He had a unique style,” said Rhodes, ‘The American Dream.’ “It was almost TV-radio. He’d make you feel the colour of the guys trunks to his face to his eyes. Our industry was very lucky to have somebody like him, especially my era to come along and feed off of.”

Dewey Robertson went through Florida when he wrestled as the Missing Link in the early ’80s. The veteran Robertson has a different perspective of his colleagues from the past.

“I would say within the last 10 years, I’ve been hearing about all these guys going down, and it’s devastating. When I was young, and all the other guys would say ‘oh, so-and-so died, so-and-so got sick,’ — it wouldn’t mean anything to me, I didn’t know them,” Robertson said. “Now, Gordon Solie, I’ve got a picture of him with my son. He was quite a friend of mine.”