The voice of wrestling can no longer be heard.

For Gordon Solie, a man who has been called the Dean of wrestling, years of smoking have finally caught up on him. Cancer has grown so large that he was forced to lose his prize piece as result, his voice box in a recent surgery. 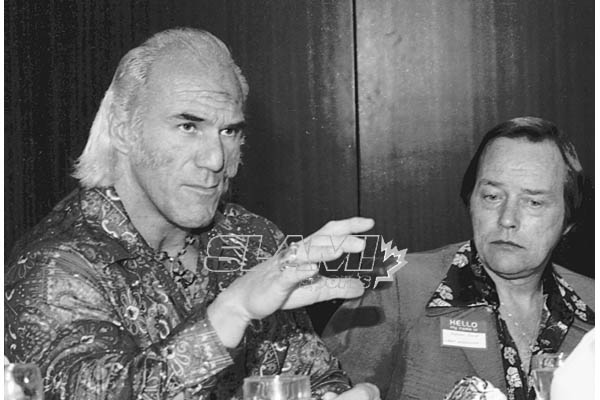 Solie is known as many things to those who know him, but for those who have never heard him will never get that pleasure. Old tapes will be the only refuge.

“Caring, funny and a true professional,” said Bill Apter, Editor of WOW Magazine, about Solie. Apter has worked with Solie a number of times, and he called him a “true friend.”

He walked into the surgery in mid-November with little hope. He thought he would die from the operation. His aging body was not going to make the operation easy.

He gave his fans some last words in a letter on the Internet. “Thanks for your well wishes and I’ll be in touch.”

The surgery was deemed a success. Support from friends and family members made his time in the hospital shorter than expected. He started rehab days after surgery and was sent home within the same week.

His voice may only be scarce for a short time. After recovery, he will be fitted for an internal voice box sometime early in the new year.

His friends were quick to thank everyone for their support. “I know when Gordon gets his new voice box, he will be able to thank you all himself,” said one friend in an email to a wrestling legends egroup.

Friends are now at his side, but it is not always this way for Solie. Living outside of Tampa, Fla., he tries to cope with a lonely life.

His dog, Aimee is the only friend he sees everyday. It was just a little over two years ago that his wife, Eileen, died.

Many wondered how Solie would live through the death of his wife, who he called Smokey. She fought cancer till the end, but Solie continues to battle.

“I woke up just before five, and she was gone,” Solie said in a 1999 interview. “I wake up every morning at four and stay awake for an hour.”

It has been fifty years next year since Solie made his first appearance in the world of wrestling. Solie made his home in Florida after his stint in the U.S. military service. He took a small job at a radio station in Ybor City, Florida. He was the only sports anchor, and he found himself interviewing local wrestlers on a regular basis.

Promoter Cowboy Luttrel offered Solie $5 for one night of ring announcing. Solie accepted, and it was the start of what Solie often called “The Solie Era.”

Soon the promotion he worked for became televised, and after clamoring to save money for using a big name, Luttrel offered the job to Solie. He accepted, and his role became a play-by-play man for the matches.

Although talking as if he was Julius Caesar, Solie was a real quiet and down to earth announcer. He took wrestling for what it was worth. He did not want to insult peoples’ intelligence. He did not sugarcoat, but he did make every move and every match seem just as technical and rigid as the next.

His announcing soon became so innovative that many announcers were being hired based on how well they could do Solie’s style.

“He became the person every broadcaster in the ’70s and into the ’80s became compared to,” said Apter. “The question was always, ‘Is he as good as Gordon,’ whenever a new announcer was considered for a position.”

“I don’t think there’s a guy behind the wrestling microphone in the world today that wasn’t affected by Gordon Solie,” said “Mean” Gene Okerland in a 1997 article.

A sleeper hold wasn’t a sleeper hold till Solie renamed it. “The hold is pinching the artery, limiting blood flow to the brain” would be how Solie would describe it.

“His face is a crimson mask,” “it’s a Pier-6 brawl” and his infamous “we’ll be back as soon as order is restored,” were sayings that Solie created during his time behind the microphone.

But it worked the other way around. “Let me tell you something, Gordon Solie,” was the natural way every wrestler would start an interview. He not only gained respect from the fans, but he gained it from the wrestlers. Something that was not easy to do.

“He was my idol at the time,” said Norman Smiley to SLAM! Wrestling. “I remember when I first moved here from England, I went straight to Miami, and would always watch the show at 12 o’clock on Saturday afternoons. ‘Live from the Sunshine State!’ he’d always say. And the first time I went there, it was Barry Windham, Luger, Scott Hall, so I was overwhelmed with these guys, even with their presence back then. Gordon Solie was one of the guys I was impressed with too. The guy with the golden tongue.”

Gorilla Monsoon, the recently-deceased long-time announcer for the WWF, took much of his style from Solie. Monsoon would use terms only pulled out of medical books to describe body parts. Monsoon did not use a book, but he used Solie. Solie said a chest was really a “pectoralis major” and a head was a “glutus maximus.”

Solie worked in Florida his whole career, but he also ventured to Georgia and other southern states to announce matches. He also was the announcer for the aborted third promotion, the Global Wrestling Alliance out of Florida.

Most wrestling fans outside the Southwest would first see Solie when he commentated on “World Championship Wrestling” on WTBS. Ted Turner, owner of the Atlanta-based station was able to gain a satellite connection, and the whole nation was able to see Solie’s face on a weekly basis.

Solie stayed there till his retirement in 1995. His departure was not a happy one. He became tired of the wondering from why he started in the business, wrestling. “The homosexual themes … the crucifixes … it’s disgraceful.”

Wrestling is not the same as he once called at the Tampa Sportatorium.

People will always quote Solie, but no one will ever match him.