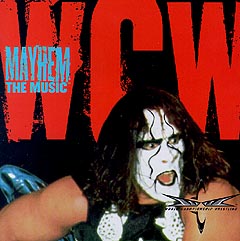 Have to hand it to WCW on this one. Not only are they slowly climbing in the ratings war, and their overall wrestling product improved, but they’ve also put out a kick-ass compilation of original music and wrestler theme songs, that currently puts them at the top of rock n’ rasslin’ heap.

First off, there’s 26 songs on Mayhem: The Music (Tommy Boy/BMG), far out-weighing the WWF Vol. 4 CD, and Bret Hart’s soundtrack for his movie, Wrestling With Shadows. Second, they have a diverse line-up of themes, from their most popular pugilists, like DDP, Kevin Nash and Goldberg, to the has-beens, or also-rans like The West Texas Rednecks, Konnan and Randy Savage.

But for the more discerning ear, the CD also includes original music from cruiserweights like Big Pun and Primer 55, to super-heavyweights like Slayer, and the Insane Clown Posse.

We would be remiss, however, if we didn’t point out the few flaws in this CD. Namely all the one minute filler tracks, voice overs from the announce team of Tony Schiavone and Bobby Heenan, and ramblings of DJ Ran and Scheme Gene Okerlund.

Those problems are trivial though, when compared to the music within. This is a true collection of songs that actually fit the product that WCW is putting out. It would be easy to see Vampiro coming out to ICP’s “Take It,” if he was still affiliated with them that is. And while originally lame, Megadeth’s “Crush ‘Em,” sounds much more powerful coming from your stereo than the PA at a house show.

The only other complaint would be the ratio of rap to rock tracks, which favours heavily more into hip-hop domain. Nothing exceptionally wrong with that, but the ratio is skewed somewhat, with a 2 – 1 advantage in favour of beats and rhythms over guitars.

Mayhem: The Music, is a small sign that WCW is turning itself around and is actually on track to gaining some ground over their biggest competitor. The music within fits the hard and heavy hitting style of wrestling better then most compilations and the sheer volume of music ensures that you’ll get your money’s worth. While it may be a little longer before WCW can equal the WWF in terms of popularity, critically, and hopefully in popularity, this CD should at least allow them to win the musical war.