Building to a Vinnie Fever pitch

Otto Gentile hopes you catch the Can Am Wrestling Federation (CAWF) fever, or least his alter ego Vinnie Fever does. The disco-dancing assassin who plies his trade in Alberta says the promotion has made huge leaps in the three years that it has been in operation and hopes it can explode across the country and beyond.

“It’s going to take a lot of hard work for the partners of Can-Am,” says Fever on the promotion’s continued growth, “but we’ve grown 60% from last year in terms of shows already.” 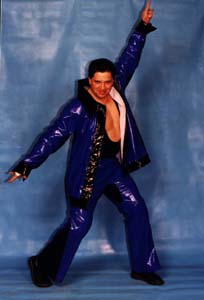 Fever attributes a lot of the CAWF’s reasonable success to amount of talent available on the fledgling company’s roster. Boasting “the top 15 – 20 wrestlers in Canada,” Fever says the likes of Steve Wilde, Steve Gillespie, Gemini, Michael Mcfly, The Cuban Assassin, and himself, along with former alumni Jim “The Anvil” Niedhart, Keith Hart and Beef Wellington have all had their impact on the paying public, receiving upwards of 500 – 600 people a show.

And the CAWF definitely believes in promoting their product. They are firmly established in the Western Canadian market, performing up to five shows a week, from Manitoba to British Columbia. Fever says there’s plans to make it to Ontario, and even south of border in the very near future.

It shouldn’t be too difficult. After all, the CAWF isn’t a one-dimensional promotion, according to Fever. With their hand in every bag of tricks, the CAWF incorporates the traditional stylings of the old school of wrestling, but incorporates the hard-core crunch of the ’90’s, something, Fever says, which had to be done, judging by the number of ECW fans in Edmonton.

“We try to come up with our own style. We’re a little more hardcore than most promotions, and a little more down to earth than others. A little bit of old school with a little bit new school mixed in.”

To that end, Fever describes himself as a fan of the old school, but says he can match the hard-core harshness of the competition, any day of the week, and twice on Sundays. The 225-pound “King of swing,” says he got the wrestling bug years ago, and has never really looked back.

“It’s always been a dream of mine to wrestle. “(Vinnie Fever) started off as a big joke to tell you the truth; almost 10 or 12 years ago. Vinnie Fever is somewhat a part of me; it’s a disco character. Vinnie Fever comes out to do a little dance, kick some ass, and have some fun. Everybody knows who Vinnie Fever is.”

Fever’s in ring persona started as a face, but has since turned heel, and according to the disco dancing dangerous one he has quite the in ring arsenal. There’s the Vinnie Elbow, his finishing move, based on The Rock’s, but with a twist. And his set-up move is a DDT, the Saturday Night Special, similar to the one performed by Rey Mysterio Jr.

With his battle cry of “I’m the king of swing. Disco rules baby,” Fever has racked up some wins, now being one-half of the CAWF tag-team champions, with Keith Hart. He firmly believes in paying his dues, and working your way up the ladder. Fever started as a ring announcer, a job he still performs for Can Am, and has made appearances in the CNWA as well as Canadian Rocky Mountain Wrestling. He speaks a bit of his road to where he is now.

“The training was the toughest thing, I’d have to say,” says Fever about the toughest challenge he’s faced so far. “I’ve been fortunate enough to have only one injury – a bi-cep bruise that went from my forearm to my shoulder.”

Fever also speaks fondly about the early days of CAWF, a promotion he co-owns and runs with Wilde and Gillespie. He says his first match was against Steve Wilde in his backyard of Calgary, in a bar called the Back Alley, with 500-600 people in attendance. He lost in front of his own hometown crowd, “It’s never tough losing in a match,” says Fever on putting his opponent over, but won a battle royal the latter on in the same night.

Some of Fever’s favourite moments include one of his first matches against Lenny St. Clair, who has been to Japan. The match was back and forth action, and hard fought, but Fever lost to the running power bomb. Another favourite was a three-way hard-core dance with Steve Wilde and the Cuban Assassin 2, which included pie plates and clocks, among other things.

Looking to the future, Fever’s career, as well as the CAWF’s has many bright possibilities. Currently the promotion has a talent swapping agreement with several minor Japanese organizations, and a possible deal is being hammered out with WAR. The CAWF also has it’s own version of Ontario’s Ring N’ Ears, called Slamming & Jamming. Past S&J’s have included Canadian rock and roll icons like April Wine, Trooper and Loverboy, and a future show will include Doug & The Slugs.

While their aspirations are high, Fever knows that some of his talent, including himself, might make a jump to one of the big three promotions, something Fever says he doesn’t mind.

“I would never hold anyone back. We are an independent circuit, and everyone wrestles as an independent. If I had a chance, sure, I’d go for it.”