Wrestling video games have come a long way on the PlayStation consoles with none better than this year’s offering of Smackdown vs. Raw 2010. There are some subtle tweaks as well as major additions, which makes SVR 2010 feel like a brand new experience over the ’09 version.

Right off the bat there is a new Training Facility as soon as you press start at the title screen. This is a brilliant concept where players can get used to the controls and are actually taken through an optional tutorial where one can learn the moves quickly. The active character is John Cena and you work over a motionless Randy Orton. 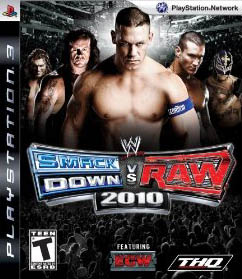 The most anticipated add on is the create your own story line mode, and wow, does it live up to the hype. Gamers have the option to make their angles as detailed or simple as they please, can start from any calendar date with a show on it, and produce text. This text option is uncensored, and although entering the words one letter at a time is definitely tedious, it is well worth the effort. SVR even allows the user to enter background noise during encounters, and in certain situations to alter the health of the wrestlers heading into a match. The only downside is that the words are shown in a bubble, not actually spoken; however, I’m sure the technology for that to happen is coming along.

The Superstars sometimes awkward looking mouths were a concern last year. Not only has THQ fixed the mouths, they also allow the player to assign different facial emotions during the create your own story line mode.

The fighting controller moves are generally the same as ’09 with similar smoothness in play and impressive graphics. One fun feature change is that when a wrestler performs his/her finisher the camera goes into slow motion with a slightly darkened screen and camera flashes going off. A small yet valuable extra. Another nice touch is having a visible referee inside the ring that can be knocked out to allow illegal activity; a throwback to the classic Super Nintendo WWF games.

This most recent version allows the player to have immediate access to all match types, compared to last year where certain matches had to be unlocked. The Elimination Chamber is presented realistically with the championship Scramble and mixed tag teams being added in. The Royal Rumble option received a terrific upgrade with two more interactive ways to eliminate opponents. Following each battle the game actually saves highlights automatically and the user can keep these for the Highlight Reel or to put online.

The Road to WrestleMania and career mode are basically identical to 2009. I still found the career mode to be tedious as fight after fight with not even a simple storyline to follow can make long time game play dull. However, Create a Superstar became even more detailed as a paint tool for customized tattoos and face paint allows for further character uniqueness. One area with definite room for improvement was the play-by-play commentary. Each brand has its representation and is less annoyingly repetitive than in other SVR titles — but some work is still needed.

Smackdown vs. Raw 2010 not only builds on the qualities of last year’s offering; its new additions revolutionize wrestling video games all together. If a player wants to possess the most complete control ever over their WWE experience then this is an absolute must have for any collection.