I must admit that when I picked up the book Captain Lou Albano: Often Imitated and Never Duplicated, I was expecting a book that mirrored one of his classic interviews, wild at times, often incoherent, but thoroughly entertaining. It sure delivers on the entertainment front, but it is also a concise and well-organized history of not only his illustrious career but that of the WWE, from its beginnings as Capitol Sports through today’s WWE, all of which he was around to witness. 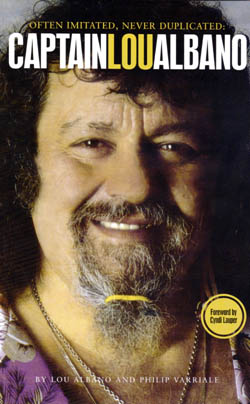 The book, published by Gean Publishing and co-written with Philip Varriale, is punctuated by great photographs many never seen by wrestling fans before.

Captain Lou takes you through a very short look at his career (under 200 pages) but what is there is very fact filled. Unlike many wrestling biographies, he doesn’t spend 50 pages giving you the humble beginnings of his life. Like every subject in this book, he covers it in a few pages or less. His wrestling career is covered from his early days to his tag team with Tony Altomare as the Sicilians. A chapter is dedicated to the early beginnings of Capitol Wrestling as he reveals the behind the scenes dealings of Vince McMahon Sr. and Toots Mondt. Lou seems to have been a very good record keeper (or his co-author did). If he mentions he wrestled Bruno Sammartino on July 4, 1964 in Pittsburgh you can be sure he did.

Albano goes through each of his protégés one by one, both singles and tags. He gives you short back-stories on each wrestler, often their real names or other gimmicks they used previous to coming under his managerial control. He seems to have something good to say about everyone he has managed be it The Valiant Brothers and Wild Samoans, who dominated the tag scenes with Lou at their side, or someone like Iron Mike Sharpe, who most fans recall as a glorified jobber,Only briefly does Albano touch on his drinking and tells of his on-going firings by Vince McMahon Sr. whenever Lou had a few too many. Lou also defuses rumors or wrestling folklores on everything to the New York ban on masked wrestlers, which in fact was only a Madison Square Garden ban that dates back to January 1916 when The Masked Marvel nearly won a tournament there by beating some of the wrestling world’s best while having his identity hidden under a mask (he turned out to be a hooker named Mort Henderson). Lou also defuses the tale that on his deathbed Vince Sr. made his son Vince Jr. promise to take care of all his old loyal buddies like Gorilla Monsoon and Arnold Skaaland.

There is a chapter on Albano’s relationship with rock star Cyndi Lauper (who wrote the foreword for the book) and his role in the birth of “rock ‘n wrestling.” Albano never will shy away from taken credit from everything from selling out Madison Square Garden as the manager of a foe of Bruno Sammartino, to discovering Hulk Hogan for Vince McMahon Jr.. Lou not only crossed over into the music world with Lauper but also with the band NRBQ who would later record the song Captain Lou.

Albano goes from his WWF days into his indy wrestling career and his television and movie career that followed. He seemed to put the same zeal into his post WWF work that he did in his heyday in the 1970s and ’80s. The last 10 pages are an Albano family album, with a selection of family photos ranging from the 1970s to today.Overall Captain Lou Albano: Often Imitated and Never Duplicated is a well chronicled — albeit shortened — look at one of the most famous wrestling managers of all time. After reading this you come away with not only a much more informed view of Captain Lou Albano’s career in and out of the ring, but also that of nearly every person that played even a small part of his life in wrestling.

If you are looking for dirt, look somewhere else. Lou does not talk bad about anyone in the book. While you can make some assumptions of people he has a lesser opinion of than others. He may not be a fan of what the WWE has become today he refuses to harshly bad mouth Vince McMahon Jr. for what it has become. He chooses to look at things through rose-colored glasses. That attitude throughout this book makes it different than many wrestling books and a fan friendly read.