Ovila Asselin a rose by any other name

It’s the names that are intriguing, not the result. Consider this St. Louis bout from May 26, 1962: Hans Schmidt beat Guy LaRose. Somebody was playing a rib, as Schmidt’s real name was Guy LaRose. The impersonator? Fellow Quebecer Ovila Asselin.

Asselin was a mid-level star, both in his home province and abroad, known for his dropkicks and the Irish whip along with his sculpted physique. 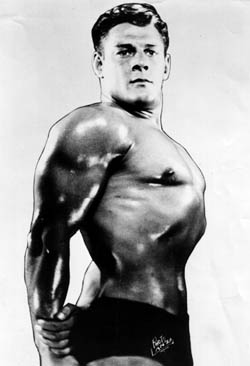 Wrestler/photographer Tony Lanza discovered Asselin working out at a beach near Montreal. The 6-foot-1, 225-pound Asselin had been Mr. Canada at 17. Lanza took the bodybuilder under his wing and trained him for his debut in 1948.

“He was one of my pupils,” Lanza explained in 2002. “I was looking for bodybuilders for Joe Weider at that time. … I saw him and I got him involved as a bodybuilder. Then he got involved in wrestling.”

One of his pals was Eddie Auger, the uncle of Johnny and Jacques Rougeau. “He was my uncle’s best friend, Eddie Auger’s friend. They started together in 1948, 49,” recalled Jacques Rougeau Sr. “He turned out to be a damned good wrestler, that Ovila.”

“I always called him a preliminary bum. The fans loved him,” said Woods.

Former wrestler and promoter Bob “Legs” Langevin tried to describe Asselin’s style in 2002. “He had a very beautiful physique,” said Langevin. “He didn’t wrestle with the light-heavyweights, but he was more that type. He didn’t go out very much. He stayed in the province of Quebec.”

Perhaps Langevin didn’t know of some of the other names that Asselin assumed on the road.

Guy LaRose was the name he used outside of Quebec, including runs in the Gulf Coast territory, Northlands Wrestling in Ontario, as well as St. Louis. Around Buffalo, Asselin was known as Bobby Brown. 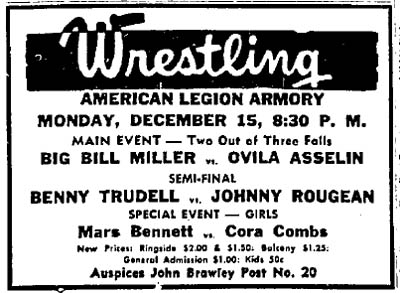 Asselin was also on the initial tour of Japan by North American wrestlers in 1951, organized by Bobby Bruns (who would later be the matchmaker in St. Louis, and perhaps came up with the dueling LaRoses). Others on the tour were Andre Adore, Hal Sakata (Olympic weightlifting champ in 1948), Len “Doc” Hall from Nebraska, and Casey Burger, who got hurt, and was replaced by Gino “Red” Vagnone.

A Lanza publication, TV Wrestling Stars, from April 1956 continued to trumpet his old pupil: “Ovila Asselin, just back from France, is being kept busy filling bookings in the Montreal area. While in Paris, the local wrestler drew much admiration for his physique which he developed through long hours of exercise. The youthful athlete still holds the Canadian Junior Heavyweight championship.”

The career of Asselin reached a fourth decade. “He used to wrestle in Grand Prix wrestling and for a short stint with the Rougeau promotion back in the ’60s and ’70s,” said Woods.

After his career ended, Asselin bought a hotel and restaurant outside of Montreal. “He bought himself a hotel up in Magog, somewhere around Sherbrooke. That’s it, the end of his career there,” said Rougeau Sr.