The recent line of Jakks WWE Classic Superstars series of action figures, vintage LJN style, has sparked nostalgia for fans like me who collected the original nine-inch sturdy rubber wrestling dolls in the ’80s.

Spanning six years, the LJN collection showcased the top wrestlers and personalities of ’80s-era WWF, and in many collectors’ minds remain the most memorable. Contemporary wrestlers like The Undertaker, Shawn Michaels and Rey Mysterio are now being immortalized in rubber — “LJN style” — for the first time. 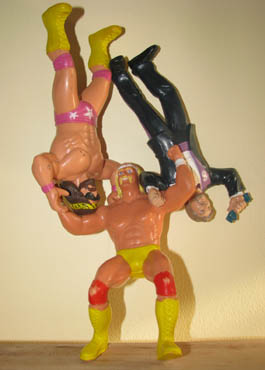 The original LJN figures were capable of superhuman strength.

But they’re not easy to find, I learned by searching toy departments across my hometown of Kitchener-Waterloo for the past several months, hoping to spot one of them amid displays of plastic pose-able WWE action figures. In recent weeks though, I finally found a new addition to my collection at a Toys R Us in Kitchener — a recently released LJN-style “Nature Boy” Ric Flair figure, and I couldn’t have been more thrilled.

Growing up a wrestling fan in the ’80s, I had always wished there was a Ric Flair figure to do battle with my extensive collection that included everyone from Andre the Giant and The Iron Sheik to Jesse “The Body” Ventura and Tito Santana.

But even my collection pales in comparison to that of Kato Richard of Toronto, who has nearly every figure imaginable, many still in the original packaging. “Ricky ‘The Dragon’ Steamboat is my favourite,” he told me. “My father was a huge wrestling fan from the days of Maple Leaf Wrestling, and we’d watch many, many matches together and really enjoyed each other’s company. When he suddenly passed away, I decided to collect his favourite wrestlers as a way to remember all the fun times we spent together.”

With personalities like Junkyard Dog, Big John Studd and, of course, Hulk Hogan, the first series of LJN figures hit store shelves in 1984. The first figure I ever purchased was Jimmy “Superfly” Snuka, and I can still remember the excitement of taking him out of the package.

Snuka recently told me the release of those first WWF figures was memorable for him as well. “Yeah brudda, those old rubber dolls, I know them well,” he said over the phone from his New Jersey home. “Every time I do an autograph signing I see the fans bringing them, some still in their original package and I’m always happy to sign them,” he said.

“You know brudda, it felt so good at the time knowing that the WWF felt I deserved something like that — being one of the first figures they ever made — I was truly honoured and there was such a great spirit at that time, with those dolls. It was an amazing time to be a wrestler in the WWF.” 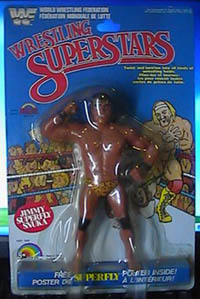 “Superfly” is trapped and Marshall won’t let him out!

The second figure I purchased was “Rowdy” Roddy Piper, I told Snuka, and the figures battled on my living room couch countless times in Fijian strap matches (using a scrap piece of leather I tied to the figures’ wrists).

“Those figures came out right when that whole feud between me and Piper was starting,” said Snuka. “I can remember when we were fighting across the country, and we’d start seeing the figures in the audience, and it was beautiful, brudda!”

It was indeed a beautiful thing for me too, as I was finally able to use wrestling figures to simulate wrestling matches, rather than my G.I. Joe action figures. As my LJN figure collection grew, with names like Greg “The Hammer” Valentine, Paul “Mr. Wonderful” Orndorff and King Kong Bundy from Series 2 in 1985, so did my hand-made props that included a wrestling ring made out of cardboard, wood and shoe laces, a steel cage constructed from chicken wire, and a cardboard ramp leading to the ring like the one at Maple Leaf Gardens.

In dog-collar chain matches between Piper and Valentine, I used ketchup packs (courtesy of McDonalds) for blood that I’d smear across the figures’ faces and chests, often staining the canvas of my hand-painted ring and leaving my rec room smelling like ketchup. As time went on, I set up dramatic lighting to mimic a WWF house show in my rec room, set up a portable stereo for entrance music, and designed a ringside area complete with an announcer’s table, ring bell and metal folding chairs (often used when the referee figure was looking the other way).

Collector Kato Richard agreed the LJN figures were ideal for playing with, able to withstand numerous hours of abuse. “The worst thing that can happen is (the figures) would lose some colour — usually on their faces (or clothes) — due to excessive battles,” said Richard. “I would purchase doubles so I could keep one in the package, with a copy of their bio located on the back of the card. That’s why I have so many ‘mint’ (figures) on their cards today.”

Richard said the majority of his collection was purchased at toy stores, primarily Toy City in the ’80s. “I purchased most of my figures for prices between $4.99 and $9.99,” said Richard. “The most I ever had to pay is $325.00 U.S. for a pristine (Demolition) Ax figure on a black card.” 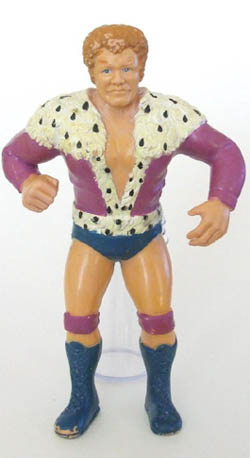 One of the greatest rubber dolls on God’s green Earth.

Demolition is Richard’s favourite tag team, and yet the absence of a Demolition Smash figure has always left an odd void in his and many other collections. “Many fans who collect LJN Wrestling Superstars figures have pondered that question (why was there no figure of Smash ever produced?),” said Richard. “We must assume that (the WWF) had in mind to produce a Smash, as part of a tag team championship box-set with Ax and Smash with the belts, but the line was discontinued when the LJN company went under.”

According to one collector who sells figures on eBay, there was apparently a seventh series of LJN figures in the works, slated to include Demolition Smash, along with The Bushwhackers, Brother Love, Bad News Brown and The Barbarian.

And of those elusive figures still out there, the ones Richard is looking for to complete his collection are Brutus Beefcake (Series 6 on black card), the Strike Force tag team set, and two Corporal Kirchner variants — one with stubble, one with a beard — mint on card.

For me, I’ve yet to track down a “King” Harley Race figure with removable crown. On eBay, I’ve seen the figure several times without its crown, and recently, the crown by itself without the figure — sold for $27.50 US, plus shipping/handling.

Richard has the Harley Race figure with crown still in its package. So too does the real-life Harley Race: “It’s hanging on my wall right now — and I’m looking at it,” said Race from his office at the Harley Race Wrestling Academy in Eldon, Missouri.

Anybody seen the King’s crown?

“I remember at that point in my career, I was very honoured to learn (the WWF) were making a figure of me,” said Race. “The fans still bring them to me to be signed. Anything that keeps you alive in the memories of fans, like those figures, makes me really happy. I especially like the (Jakks) doll they made years later with me in the red, white and blue robe that encompasses my entire career, but I’m also proud of that rubber one that represented ‘The King’ persona.”

Jim Myers agreed it was an honour to be immortalized in rubber when the WWF released a figure of his persona, George “The Animal” Steele. “I’m glad my mother was still alive to see her son made into an action figure,” said Myers from his home in Cocoa Beach, Florida. “I’ve got two or three of those figures myself, and one of Vince McMahon — I kept one of those.”

I asked Myers why he specifically kept a Vince McMahon figure, with the ’80s-era red sport coat and microphone: “I sometimes pull them out and have Vince interview me — it takes me back to old times,” Myers laughed. 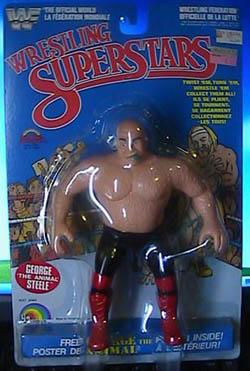 “The Animal” is packaged!

These figures take me back to old times too, as I can vividly recall pitting George “The Animal” Steele against Bruno Sammartino night after night in a steel cage match in my rec room after seeing a 1960s match between the two on the Coliseum Home Video, WWF’s Inside the Steel Cage.

“That was my most favourite time in my career,” said Myers, referring to his feud with Bruno Sammartino. “My career was essentially over when Vince Jr. took over. But then they had this idea to turn me face, and that was the beginning of the WWF becoming a billion dollar business. In that first edition of figures, you had Hogan, Studd and the Iron Sheik. I was in the next edition along with Valentine, Bundy and others, and I’m really glad I was. It was a good marketing tool, those figures, and it’s because of Vince Jr. that I could retire and live in a home in Cocoa Beach.”

I asked Myers where he keeps his George “The Animal” Steele action figures these days. “In my garage,” he said. “I call them my Mini Me’s, and every once in a while, I like to imagine them having a battle royal in there. And the great thing is George always ends up the winner,” Myers laughed.

Jimmy Snuka said he’s keeping his collection of “Superfly” action figures in safe keeping, for future generations: “I’m keeping them for my grandkids,” Snuka told me.

Meanwhile, Kato Richard is still looking for the Holy Grail of his collection, along with figures from the new LJN-style series. “I was happy to see WWE give new life to the LJN line through Jakks,” said Richard, who’s waiting for the figure of his favourite Diva, Trish Stratus, to hit shelves in Canada. “I think (the new LJN line) has also made collectors of old, like me, relive their childhood memories. Many of the old names are coming back, like Rhodes, DiBiase, and so on. And now that we are grown up, we can share that experience with our own kids — who in turn, can enjoy the figures with their dads.”