HOUSTON – Ever the techno wrestling geek, Bob Kapur filed his report Twitter-style, giving you short bursts of his wacky life as he heads into Wrestlemania on Sunday, with cabs, t-shirts and cell phones on the agenda.

Sun, Apr 5, 8:35am (Houston time) — Start the day with a hotel lobby breakfast. There’s a waffle maker there, but no batter. Bigger screwjob than Survivor Series 97.

Sun, Apr 5, 9:29am — Take a vote with my traveling buddies. Not going to Axxess. Instead, will take in some of the local sites. Head to a Texas flea market.

Sun, Apr 5, 10:53am — There must be a “One Way” sign factory in Houston — they’re everywhere! Driving in this town is harder than watching a Ricky Ortiz match.

Sun, Apr 5, 11:36am — This tent has the biggest collection of knockoff “Beany Babeez” ever. It’s next to a stand that sells wrenches, keychains, and mangos.

Sun, Apr 5, 12:33pm — “Highlander” Rory McAllister is on the call as well. It was stupid of WWE to let those guys go. They never got a fair shake in my view.

Sun, Apr 5, 1:59pm — Some more sightseeing. This time, a Target, where I got the Chainsaw Charlie legends figure, and Best Buy for some wrestling DVDs.

Sun, Apr 5, 3:48pm – Searched the city for the BBQ place recommended by one of the ROH staffers. The name is Goode BBQ. It should be called Just Okaye BBQ.

Sun, Apr 5, ???pm — Realize I forgot my phone at the hotel. That’s what I use instead of a watch. So times are unknown at this point.

Sun, Apr 5, ???pm – Another day, another merch table. My credit card is taking a beating. Obama could bail out GM with what I spent on t-shirts this weekend.

Sun, Apr 5, ???pm — Head to my seat. Last week, my buddy Noel scored us floor seats when the new block of tix were released. This is gonna be awesome. 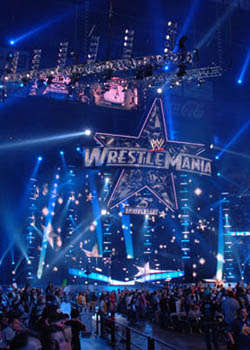 The set of Wrestlemania 25. Photo by Mike Mastrandrea

Sun, Apr 5, ???pm — I can’t stand the people around me. The guy behind me squeals like a girl. The people in front keep standing up and blocking my view. Jerks.

Sun, Apr 5, ???pm — MitB match was a great opener. Insane moves all over the place. Too many highlights to pick the star of the match, but safe to say not Kane.

Sun, Apr 5, ???pm — Jimmy Snuka was a childhood hero of mine, so to see him in the ring again — I’ve got goosebumps. And wow, Steamboat looks great in there.

Sun, Apr 5, ???pm — HBK and Taker was everything the match should have been and more. A heck of a roller coaster ride. I feel like I’m ten years old again.

Sun, Apr 5, ???pm — Orton and HHH started off with them exchanging finishers and not trying for the pin. That reminds me of some bad indy shows I’ve been to.

Sun, Apr 5, ???pm — Not pleased with the main event. Seemed overly self-indulgent for HHH, and wasn’t compelling. Crowd turned on it, starting a wave midway.

Sun, Apr 5, ???pm — Crowd thinning out, but we have to wait until they initial my ticket stub to prove that I get to keep my souvenir chair.

Sun, Apr 5, ???pm — Mark-out moment! While waiting for my chair, a WWE staffer let me get a picture wearing Jerry Lawler’s crown (he’d left it at the desk).

Sun, Apr 5, ???pm — Sign Guy (not the Dudley, but rather the superfan in the blue shirt and red hat) is signing autographs for fans. I politely decline.

Sun, Apr 5, ???pm — Cabbie says he moved from New Orleans due to Katrina. Makes you think. I’m thinking about going to Extreme Rules PPV in New Orleans in June.

Mon, Apr 6, 1:11am — Drop off Noel and his cousin at their hotel, then me and Doug make our way back to our hotel outside of town. Day 2 a complete success.