PORT COQUITLAM, BC – It was a particularly rough weekend for Kyle O’Reilly and 19 of his wrestling brethren this past weekend in Port Coquitlam. As a rule, independent professional wrestlers don’t have the easiest schedule on the weekends, but the schedule that 20 wrestlers on the ECCW roster had to endure was extreme by any measure. Where an independent wrestler might be expected to wrestle once or twice a weekend, Kyle O’Reilly wrestled close to 40 matches in 72 hours. And he didn’t get paid a cent for any of them.

That’s because the 20 wrestlers for the Extreme Canadian Championship Wrestling promotion volunteered their time to take part in a wrestling marathon in an effort to raise food donations for a local — and starving — food bank. According to John Wolff, the Chairman of the Board for SHARE Family and Community Services in Coquitlam, B.C., the demand for food has reached epic — and scary — proportions. 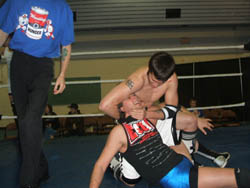 “Let’s put it this way,” Wolff said during ECCW’s Wrestling With Hunger marathon. “Twenty per cent of the people that come to the food bank are employed. They have jobs. This recession is hurting a lot of people, and it’s not always the people you expect.”

Dave Teixeira, the promoter behind ECCW, visited the local food bank to see for himself how dire the need was. “It was so empty,” he said of the unstocked shelves. “Like scary empty. It was eye-opening for sure.”

He had always wanted to do something to help out SHARE, and had decided that a wrestling show would help, but with overwhelming need the food bank was experiencing, Teixeira understood he needed to do something spectacular to grab people’s attention and hopefully compel them to donate something as well.

So the plan was hatched to not only hold a wrestling show, but a wrestling event. To grab people’s attention, it was decided that ECCW would attempt to break the world’s record for the longest wrestling show ever which, up to that point, was 10.5 hours. “We didn’t want to just break the world record,” Teixeira said, “we wanted to smash it.”

Besides, the longer the wrestling show, the more time there would be for the public to donate food. So the plan to run a 72-hour wrestling marathon was hatched and it began on April 2nd and lasted until April 5th. Over the course of the three day show, 248 matches were held, ranging in length from 6 minutes to over 20 minutes.

Which brings us back to Kyle O’Reilly, a young and talented wrestler from ECCW in incredible shape who also possesses insane cardio. O’Reilly has been in some of ECCW’s most gruelling and intense matches, but nothing could prepare even him for the challenge of Wrestling With Hunger.

“I knew it was going to be a challenge, but not like this,” O’Reilly said on a two-hour break before his next match. At the time of this interview, he had already wrestled in approximately 20 matches. “My sleeping pattern isn’t that great and it’s hard to maintain my blood-sugar level. But it’s for a good cause which makes it all worth it.” 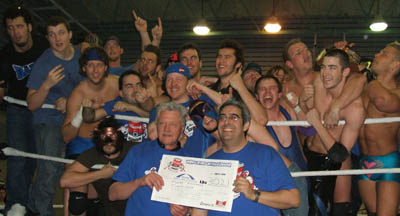 The hard-working ECCW crew at the end of their marathon.

O’Reilly’s sleeping pattern was off because he had spent the previous night sleeping in his car. In order to preserve the world record attempt, wrestlers were not allowed to leave the property of the Hyde Creek Recreation Center where the event was held. As a result, wrestlers were forced to sleep in darkened rooms in the facility, or, as Kyle did, in their cars. “I ended up sleeping in the car because the trailer out back was full,” a tired-looking Kyle explained. “But I’m hoping my girlfriend is going to bring her van tonight and that might be a bit better.”

Later that night, O’Reilly was going to be working a 10 p.m. to 4 a.m. shift, wrestling matches off and on for that time period. It was demanding, but doable, he said. “My hat goes off to whoever did the scheduling because it must have been a tough thing to do but they’ve managed to make this as easy as possible for us.”

That doesn’t mean it was at all easy. The wrestlers endured sore limbs, bloody noses and, in a couple of instances, minor concussions as a result of the constant wrestling. “It’s pretty rough,” is how wrestler El Phantasmo put it on a short break from ring action. “I’m tired and a little sore, but it’s all good,” he reported. “Just one more day to go.”

Ten hours later, at approximately 1 a.m., El Phantasmo was still wrestling, albeit not as hard as he usually does. Most of the match consisted of rest holds and interacting with the small crowd that was on hand. But it was an official match nonetheless and it lasted nearly ten minutes. And although the fatigue was apparent on the faces of the wrestlers, not one of them backed down from the challenge. All 20 of them stayed until the very end, and even showed real signs of life during the event’s final hours.

The final match of the marathon was a 20-man Battle Royale, featuring all the wrestlers involved. No shortcuts were taken and with a crowd of over 100 people on hand, the wrestlers seemed to catch some of their energy. Ray Brooks, who up until that point had not won a single match at the event, was victorious and was thusly crowned the new Wrestling With Hunger Champion. The crowd erupted into enthusiastic applause, which was capped by a standing ovation for the wrestlers and volunteers that made the event possible.

They had good reason to cheer. Because of the efforts of the men and women in ECCW, over 3,000 pounds of food was donated. Teixeira had set a goal of 2,000 pounds for the event, and was proud to be able to tell John Wolff and SHARE that that goal had been exceeded.

“I just don’t have words to express how I feel right now,” said Heather Scott, a co-ordinator from SHARE said after the event. “I just don’t know what to say. These are 20 giant guys with giant hearts, what else can I say?”

John Wolff was equally as happy. “I can’t believe this,” he said earnestly. “This is more food than would be donated at six or seven big events. So to get this in one is outstanding. I wonder what all our volunteers are going to think on Monday morning?”

ECCW veteran Scotty Mac was proud of his troops. “I always thought we had the greatest group of guys, but now it’s been proven ECCW has the best group of wrestlers around,” he beamed at the end of the 72-hour marathon. “A lot of these guys were hurt and exhausted throughout this event, but they just kept going. I knew it was going to be hard, but not as hard as it was. And everyone pulled through, so yeah, I couldn’t be prouder.”

Dave Teixeira shared that sentiment and wants to expand the marathon into a yearly event, one that other wrestling promotions might emulate. “It’s a great time to do it during Wrestlemania weekend,” he said. “It would be awesome if other promotions did it, but we’ll see how that goes. The main thing is we got through this weekend, we were able to help out the community and our guys all performed magnificently. Really, what more could you ask for?”

SLAM! Wrestling would like to congratulate all the men and women who participated in the Wrestling with Hunger event, including all the many volunteers who made the event a success. Special thanks to SHARE Family and Community Services for their help with this article. For detailed results and more information, please visit WrestlingWithHunger.com