LOS ANGELES — In person, The Big Show is, well, BIG. Yet he isn’t the man that he once was, and that’s a good thing. He’s lost 100 pounds since he last graced the big stage.

In fact, it’s fair to say that The Big Show — Paul Wight to his friends and family — is in the best shape he has been in since first entering WWE a decade ago. 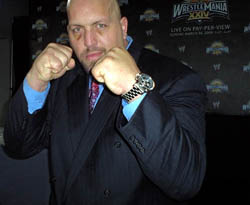 The Big Show strikes a pose at the WrestleMania 24 press conference on February 25, 2008, at the Staples Center in Los Angeles. Photo by Kurt Nielsen

“I lost 100 pounds. I boxed. I got a nutritionist, a guy by the name of Artie Artwell out of Phantom Boxing in Miami. Hulk Hogan hooked me up with him,” Big Show said. “I was trying to get in shape, lose weight. I was very unhealthy, very sick.”

So addition to being able to credit Hulk Hogan (Terry Bollea) for the early monster push in WCW — literally, as it was Hogan who “pushed” The Giant off the roof of the Joe Louis Arena in Detroit in 1995 — Wight can also give props to Hogan for his life change.

“Everybody knows Terry and I have been good friends for a long time. Terry hooked me up with Artie,” he said. “Artie started working me. He’s an older trainer — a black guy from Philadelphia. Fast with his hands, and a good motivational guy, too. He’s into Tony Robbins, and a lot of stuff like that, just really positive motivation that got me very positive. Artie turned my life around.”

Artwell and Wight started working out in March 2007. On Tuesday, via telephone from Miami, Artwell recalled the challenge of whipping Wight into shape to Kenai Andrews. “He was about 530 pounds when he came in and almost seven feet tall, so that was very imposing and our first line of attack was to try to get him to you know to, drop some weight, and we accomplished that by doing some high intensity interval workouts in addition to a high protein low glycemic diet,” recalled Artwell.

The weight came off Wight quickly, Artwell said. “Not the standard a pound or two a week that most personal trainers say that you need to lose. That would probably have been discouraging for him, and then after that we got him fundamentally sound into teaching him how to box.”

Another lifestyle change has helped as well: Wight gave up smoking. “My last cigarette was January 10th of ’07. Last one, and I haven’t had one since,” Wight swore.

Artwell is proud of the changes Wight made. “Yeah he quit smoking; he changed his whole lifestyle around. As a matter of fact he said to me on several occasions, he said, ‘The best thing to come out of this was I met you and you actually helped me to save my life. You saved my life.’ — his words exactly to me.”

The Big Show has battled with the bulge in the past.

“I tried to lose weight before, but nothing ever sticks,” he confessed. “It was the conscious decision when I started to box. It was one box to win the fight. One punch to knock you out, one punch could kill you. So I said, ‘I need to get serious here.’ If I want to do this boxing thing, I need to get serious, first of all with my physical self.”

And box he will, at WrestleMania 24, facing off with Floyd Mayweather Jr., who broke Show’s nose and gave him black eyes during the start of their angle at the No Way Out pay-per-view.

— with files from Kenai Andrews

Meet the man who made Big Show small

RELATED STORIES FROM THE PRESS CONFERENCE