LOS ANGELES — Just over a week ago, I saw Ric Flair wrestle at the Staples Center in L.A. at a house show and it saddened me to think that might be the last time I would ever see The Nature Boy wrestle live. At Monday’s press conference for WrestleMania, I discovered that I’m in the same boat as Triple H.

“It’s tough. I really have mixed emotions about it,” Triple H told SLAM! Wrestling after the formal part of the WrestleMania press conference ended. “There’s a part of me that wants to see Ric go out while he’s still got it, while he’s still healthy.” 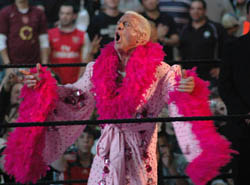 Ric Flair whoops it up. Photo by Mike Mastrandrea, www.instagram.com/mikemastrandrea_photography

There’s no doubt that the 59-year-old Flair still has it in my mind. At the Raw brand house show, in which he beat Mr. Kennedy, Flair was still amazingly over with the crowd, and put forth an effort of a much younger man.

With his upcoming induction to the WWE Hall of Fame — he was inducted into the Professional Wrestling Hall of Fame in 2006 — and his retirement looming in the near future, Triple H shared his feelings on his friend and mentor’s exit from active competition.

“He’s had the most incredible run of anybody ever,” Triple H continued. “There’s that part of it. There’s the part of me as a fan, I love to watching Ric go out every week and perform, and I know he loves the business more than anything. I’m sad for the fact that he’s not going to have that aspect of his life. But he’ll still be in business — he’ll be involved in the business, he’ll still be there. He’s going to be an ambassador for our sport until he dies. That’s what Ric lives for. In a world sometimes where everybody talks just about the paydays and the money and the hype and all that stuff, Ric is still just a guy that just loves to go out there and perform for the fans. As long as there’s fans there and they respect what he does, he’s a happy man.”

There is still a lot of speculation about who will face Flair at WrestleMania, for the Naitch’s final walk down that aisle (this being wrestling, however, no one ever says never). It won’t be Triple H, who will be in the main event, battling for the WWE World title, but Shawn Michaels, as confirmed on Monday Night Raw.

Triple H will be watching backstage for sure.

“He’s incredible — and he’s still carrying it up to this day. But I think when that match happens, where it’s his last one, he’s certainly got nothing to hang his head about.”