More focus — and Valiant — needed for Live for Sunday

Live for Sunday was touted by filmmaker Marshall Ward, one of three creative principles behind the film along with Michael Seto and Bill Boehlen, as a chance for him to meet his childhood idol Jimmy Valiant.

The former “Boogie-Woogie Man” (and even more formerly “Handsome” Jimmy Valiant) runs his own wrestling school in Virginia, and Ward jumped at the chance to get down there with a film crew without, by his own admission, much of an idea as to what the movie would ultimately be about.

Ward, Seto and Boehlen have worked together on a documentary featuring Jay Semko of The Northern Pikes (who would return the favour by scoring musical interludes between segments in Live for Sunday), and the trust developed as a filmmaking team was evident in that Seto and Boehlen signed up for the project with Ward being the only one truly psyched up about the intended focus of the film: Valiant. 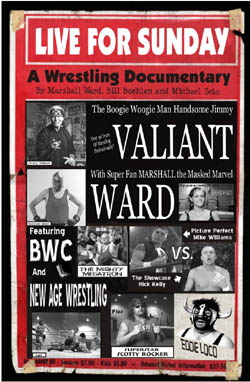 Promotional poster for Live For Sunday

As much as the intention was to focus on Vailant, however, the film hits both highs and lows as the narrative tends to meander while struggling to find that tunnel-vision. The main problem that Ward seems to run into stems from not knowing whether he is a narrator or subject of the film. Of course, one can be both, but in this particular film, where does that leave Jimmy Valiant? The film exists ostensibly as the culmination of Ward’s journey. Somehow along the way, though, Valiant is relegated to a second-level position to Ward as the filmmaker takes us through his youth as a fan and gives us his take on the importance of wrestling accoutrements like boots and masks. Not uninteresting stuff, but not Valiant.

In speaking with Ward after the screenings of the film in Guelph and Waterloo late last year, though, he admitted that finding the through-line of the film was more of a challenge than he expected. “I was thinking we’d head down to Boogie’s Wrestling Camp and the voices of Jimmy Valiant and all the colourful characters at the wrestling school would be enough to tell the story of a wrestling legend, now retired, who teaches aspiring wrestlers,” he says. “When we got back home, Mike began editing — and although we had tons of great footage with lots of colourful characters and fun wrestling action, Mike thought we needed me on camera to tell the story.”

“I always learn a great deal on these projects,” Ward explains. “In the future, I’ll be approaching my documentaries with a script to avoid the time-consuming challenges that go with trying to piece everything together.”

With that in mind, a documentary with Ward and Valiant sharing the spotlight is an infinitely better option than letting the entire project linger in post-production limbo. Besides, as Paul Salmon points out (it was he who brought Live for Sunday to the SharpCuts independent film festival, based in the Guelph region), “both Marshall and Jimmy are charismatic and articulate, and I couldn’t help thinking that the eccentric veteran wrestler had found his perfect match in the eccentric, passionate fan.” There’s no arguing that point.

Valiant, when he takes the screen, takes complete control. This is not unexpected, and it is fun to watch him slip between the personas of a reminiscing, retired wrestler, and someone who’s talking smack like he’s about to walk through the curtain. It is impossible to mistake the fact that Valiant breathes, bleeds and is betrothed to wrestling. The fact that he isn’t out there every night doing it himself doesn’t seem to eat at him, though, as he has learned to focus his energy on his students.

A wonderfully patient and dispassionate moment in the film occurs as a student is injured, with nobody sure to what extent. The filmmakers are discreet in their observance of the event (no overly dramatic music drowns out the real tension of the sequence), yet are steadfast in keeping the cameras on when, as Ward later revealed, Valiant seemed to want the cameras shut off at that point. Again, the message is that to Valiant, the care and honouring of his students is a top priority.

To this extent, the film reaches an absolute sublime crescendo — making it worthy of seeking out in spite of issues with the rest of the film — in capturing Jimmy Valiant’s mentally and physically disadvantaged wrestlers in action and in interview. Anybody who cringes at the thought of WWE rolling out another character in the style of Eugene, just to tap the all-important demographic of young males who like to poke fun at the handicapped (or better yet, anybody who actually thought Eugene was a progressive, enlightened character), has to watch the wrestlers that Valiant has trained, when no other company may even let them near the door, to appreciate what a truly all-inclusive community wrestling can be (when it tries).

As far as the filmmaking team goes, Seto and Boehlen actually go pretty far back as filmmaking partners, having known each other for 20 years, and Ward represents the “new kid” of the filmmaking team. Neither Seto nor Boehlen counts himself as a wrestling fan, but neither saw that as a roadblock, either.

In wrestling-based documentaries, there’s always a struggle to allot a certain time for the uninitiated without pandering to them so much that the knowledgeable become bored. Live for Sunday is no different as it tries to walk this line. How, then, did the largely uninterested parties of the production team attack the material?

“I feel that documentary filmmaking is really a kind of privilege in that you are invited into peoples’ lives,” Boehlen says. “You are allowed to see and document how they live and what their passions are.” For a non-wrestling fan, that’s the way “in” to the documentary: it doesn’t matter what someone’s particular passion is, you can still enjoy watching them living their dream.

For Seto, his feelings echo Boehlen’s in that it didn’t really matter whether the subject meant something to him personally or not — along with an after-effect. “I usually get interested in the subject regardless of a previous lack of knowledge and found the wrestling world fascinating,” he explains. He won’t go so far as saying that he’s now a fan, and neither would Boehlen, but the film changed their perspective on pro wrestling.

The three filmmakers have another project in the works, with the focus on Native carvers and masks. There will be, in one sense, a stark contrast to the subject matter of Live for Sunday; yet, it will also be the same: a focus on people and their passion. Although the three men can trade positions on the film crew as need be, one providing the editing while another performs the interview, there is no question from anyone involved that Live for Sunday is Marshall Ward’s baby. It’s not perfect, but it’s well worth seeking out not only for those powerful moments I mentioned, but also because you get a chance to see somebody fulfill their passion — in both filmmaker and film subject. Ward’s dream, after all, came true, and he fondly recalls Valiant giving him “a big hug near the end of our weekend and saying, ‘Love ya, son.'”

You can email Marshall Ward at [email protected] to inquire about purchasing a copy of Live for Sunday.