LOS ANGELES – The biggest heel coming out of Monday’s press conference to promote WrestleMania 24 wasn’t the cocky Randy Orton, the slimy Edge, or even the boss Vince McMahon. It was the man that the whole shebang appears built around — boxer Floyd Mayweather, Jr.

A champion boxer who many consider the best pound-for-pound fighter in the world, Mayweather is preparing to drop the gloves and do some wrasslin’, having already tested his moves on Dancing With the Stars.

“It’s entertainment. You have a chance to just be you and do what you want to do,” Mayweather, the undefeated WBC welterweight champion, said Monday after a chaotic Staples Center event that masqueraded as a news conference.

Mayweather did very little to appeal to the crowd in attendance at the Staples Center. Instead, he taunted fans for his own amusement, bragging shamelessly about his accomplishments in the boxing world and how much money he has accumulated. (His nickname is, naturally, “Money.”) To illustrate his wealth, Mayweather flashed a sizable wad of cash, which he waved at the crowd, and then tossed away. A mad scramble ensued, with a light pole nearly getting knocked over and two small children caught in the chaos. One lucky man emerged from the pileup clutching six $100 bills. Bills ranged from $10 to $100.

According to a wire service report, it’s meaningless money to “Money.” His reported payday for his bout at WrestleMania on March 30th at the Citrus Bowl in Orlando, Florida is a cool $20-million, as confirmed by Mayweather’s manager Leonard Ellerbee and WWE executive Shane McMahon.

Details of the actual match did not emerge at the press conference, however. Will it be a boxing match? A wrestling match? Some sort of hybrid? 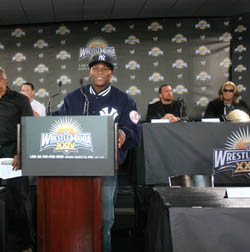 Floyd Mayweather addresses the media with WWE stars Triple H and Edge in the background. Photo by Faye Sadou

Mayweather teased the frenzied crowd after appearing from behind a black curtain wearing a New York Yankees jacket and cap. Fans shouted insults and the name of hometown hero Oscar De La Hoya at Mayweather. “I run Vegas and I run L.A. and I will run the WWE,” he boasted.

The Big Show — sporting two black eyes, courtesy of Mayweather at the No Way Out pay per view — walked out confidently in a business suit, shaking hands with his WWE cohorts, all the while keeping a casual eye on his impending opponent. Show did not seem the bit intimidated by the boxing superstar. When he addressed the crowd, Show cited the obvious physical differences between he and Mayweather, and said he could squash him like a flea, and he was insignificant in his presence.

The numbers? At five-foot-eight, 150 pounds, Mayweather looks like a toy compared to the bald Big Show, who stands seven-feet and weighs 430.

“I weigh three times as much as he does,” Big Show crowed. “It’s not fair, but I’m a businessman and I see an opportunity for business.”

The obligatory stare-down leading up to their “David vs. Goliath” match at WrestleMania was built up nicely, and did not escalate into a pull-apart brawl, which everybody was expecting anyhow. An enraged Big Show threw the podium to the ground, but otherwise showed tremendous restraint. As a matter of fact, Show came off as a slightly arrogant babyface, while Mayweather was a full-on braggadocio who got nothing but heel heat.

Mayweather’s manager, Ellerbee, scoffed that hard-core boxing fans won’t take Mayweather seriously after his WWE antics. “After March 30, when Floyd goes out and takes care of his business at WrestleMania, he’s still going to be the best fighter in the world and the face of boxing,” he said. “Tell me what changes about that? Nothing changes.”

The wrestling gig is another part of Ellerbee’s carefully crafted plan to expand Mayweather’s fan base. “Either I’m going to be a genius with this or I’m the biggest idiot,” he said. “Boxers have such a short window of opportunity. He can’t become any bigger in boxing.”

That’s why Ellerbee snagged Mayweather a spot on ABC’s reality hit Dancing With the Stars. Mayweather didn’t win the disco ball trophy, but he wasn’t the first one voted off, either. “It crossed him over and took him into the households of many middle-aged Middle Americans and turned him into a mainstream superstar,” Ellerbee said. “Now when Floyd goes into the grocery store, the first thing 65-year-old ladies say is, ‘You’re Floyd from Dancing With the Stars.”

Mayweather plans to train with WWE Latino star Rey Mysterio. Unlike his new charge, the masked Mysterio had the crowd in the palm of his hand. He talked about how upset he was to not be a part of WrestleMania — he’s scheduled for surgery for a torn bicep on Wednesday — and he was very much over with the crowd, speaking Spanish.

But in the end, this WrestleMania appears to be built around Mayweather. Judging by the press release, it could very well be the main event.

“I’m outside the box,” Mayweather said, lapsing into the third person. “Floyd Mayweather is not just a fighter, he’s an entertainer. That’s what the world must know.”

But he hasn’t forgotten his night job.

Mayweather alluded to a possible rematch with De La Hoya in September. De La Hoya lost a split decision in their last bout May 5.

OH YEAH, THE REST OF THE CARD

One might not know it from Monday’s press conference, but there will be more than just the Mayweather-Big Show match at WrestleMania. Here are some quick thoughts about the rest of the event:

Kurt Nielsen, like most of Los Angeles, was experiencing Oscar burnout on Monday, and questions why WWE would hold a press conference right after the Oscars, when most of the media was either hungover or exhausted from covering late-night parties.

RELATED STORIES FROM THE PRESS CONFERENCE