Meet the man who made Big Show small

Artie Artwell has seen just about everything as a trainer in the world of boxing. Based out of the Phantom Gym in Miami, Florida, Artwell discussed with SLAM! Wrestling at length his observations of seeing the monstrous Big Show transform into the lean, mean, pugilistic machine ready to swap punches with Floyd Mayweather on March 30 at Wrestlemania 24. 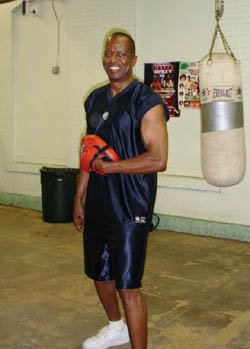 It was no small task for even the most seasoned of trainers. Artwell developed a plan that, combined with the hard work of Paul “Big Show” Wight, have produced killer results: Wight has lost 100 pounds from his old 530-pound, 7-foot frame and appears to be in phenomenal physical condition.

“The whole process was about seven to eight months,” Artwell told SLAM! Wrestling. “He’s in his mid-thirties and he’s been wrestling for quite some time but boxing as you know is a completely different skill set, so it took him a while to learn the fundamentals of boxing. For about six or seven months we started him sparring against some of the top heavyweights.”

Who would want to get in the ring with someone that big? “Oliver McCall is a former heavyweight champion of the world; he sparred with him a few times and some other top heavyweights in the area were coming by to actually box with him,” Artwell said.

Today, boxing is more widely recognized as an excellent tool for overall physical fitness, but it also requires a commitment to discipline, both in the gym as well as at the dinner table.

So, was Wight committed?

“Oh, very committed,” said Artwell immediately. “He actually was living at the time in Tampa and he would come to Miami, which is, like, I guess, two hours and a half from Tampa, and he would stay in a hotel for Monday through Friday just so that he could train; we actually were doing two-a-days.

“They were a couple hours each. We would break it up in the morning with strength and high intensity interval and aerobic training and in the evenings we would do boxing.

“He was really committed to it and also committed to the diet regimen. I completely changed his diet. I mean, he was a big guy wrestling; he practically was eating anything he wanted. And when I told him what the restrictions were, he stuck to it. He saw immediate results; felt better, losing weight rapidly, maintaining his muscle, so he was really great about that.”

Nonetheless, there must have been some unforeseen difficulties.

“Yeah. Holding the focus was a challenge, convincing people to spar was pretty much a challenge,” he recalled. “We actually had a guy that came in, and we were going to pay him to spar, he looked at the Big Show and he walked out the gym. And this guy fought Kimbo (Kimbo Slice, a famous street fighter who is now in the UFC) but looked at Big Show and said, ‘Nah, never mind, you can’t pay me enough,’ and he walked out of the gym.” 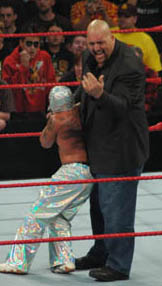 A leaner, meaner Big Show manhandles Rey Mysterio at No Way Out. Photo by Mike Mastrandrea

The obvious question looms: Is Wight ready and willing to take the training further?

“Yes, if he wants to,” said Artwell. “You know, I don’t know now that he’s back to wrestling what his feelings are about that. I haven’t spoken to him in about a week or so but yeah, he has the potential to take it further; he has the size, his fundamentals are sound, so I think he can.”

That brings up some very intriguing possibilities.

Artwell thoughtfully summed up his take on the whole project: “It was challenging and rewarding. To see that I could develop a guy who’s never boxed before and to get his weight down to a respectable size and, you know, as big as he is, he’s very agile and athletic, so it was a great experience.”

Kenai Andrews is a freelance writer based out of Toronto who wonders which heavyweight boxer would step up to fight The Big Show if he went professional.