Terry Funk, not Hornswoggle, would have been the first to take a bite out of Mr. McMahon’s ass if Mick Foley had his way. After reading his explanation as to why in The Hardcore Diaries, I cannot help but wonder why Foley is not a creative consultant for WWE.

Published in 2007 by WWE Books, The Hardcore Diaries made its debut at No. 7 on The New York Times Nonfiction Best Sellers list. Essentially, the book picks up where Have a Nice Day: A Tale of Blood and Sweatsocks and Foley Is Good: And the Real World Is Faker Than Wrestling left off. It contains around 384 pages of Foley’s life with the primary focus being his 2006 run. However, the original book concept focused primarily on the Chairman of WWE tentatively entitled, Maniac — Inside the Mind of Vince McMahon at WrestleMania. 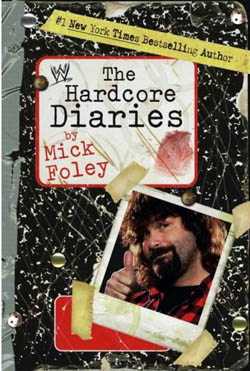 In a 2005 interview with SLAM! Wrestling, Foley explained, “I also talked to Vince McMahon a few months ago about doing an in depth look behind the scenes of WrestleMania. Kind of taking the idea from a recent baseball book, Three Nights in August, which was a look into the mind of Cardinals manager Tony La Russa over the period of a simple three game series with the Chicago Cubs. I thought if I took that same idea and used it to get into the mind of Vince McMahon during the days leading up to WrestleMania, including the event itself, that would give wrestling fans something that they have not yet had.”

According to the Introduction, this idea was given the green light; however, Foley then explained to McMahon, “I’m not sure if I can really write a book about WrestleMania if I’m playing a major role in it,” referring to his match with Edge at WrestleMania 22. Souring on the notion of writing a third autobiography, Foley opted to write a journal instead. One significant difference between this publication and his previous autobiographies is style — The Hardcore Diaries is written in a more contemporary blog format.

Moreover, what really sets this book apart from others published under the WWE umbrella are the candid criticisms of company decisions, especially those made by McMahon. For instance, Foley shares his disapproval of the company’s treatment of Jim Ross in the text by writing:

It seems that every few years, J.R. gets taken for granted and is sent out to pasture. And every time, he comes back with a renewed, albeit temporary sense of respect from WWE. I sincerely hope that respect will at some time become permanent. While I’m on the subject of J.R., let me take the time to send a personal message to Vince concerning his 2005 treatment of J.R., which I’m sure WWE employees will be hustling to have edited, and which, no doubt, Vince will read and respond to with, “If that’s the way he feels, print it.” Vince, colon surgery is serious. Not only that, it’s a sensitive issue. It’s not funny. Exploiting it and humiliating a loyal employee because of it is not only in poor taste but downright baffling to me. As far as I know, only one person found it funny — you.

If you are one of the many that is curious as to how the current creative process works in WWE, this book probably provides the best glimpse inside the creative meetings at Titan Tower. The ever-changing nature of WWE storylines is captured and explained thoroughly as Foley details his conversations with the creative team, notably Raw head writer Brian Gewirtz, about ideas heading into his tag match at the 2006 One Night Stand pay-per-view.

The book also contains a moderate amount of graphics, mainly action and personal photos, to balance it out. Occasionally, Foley disrupts the timeline between entries by writing chapters about subjects such as the fruition of his first novel Tietam Brown and his affiliations with the Christian Children’s Fund and the Make-A-Wish Foundation. One such chapter that caught my attention the most was “Good-bye, Vince.” Within this section, Foley describes in detail the one-year offer he received from TNA in 2005 along with McMahon’s reaction.

The Hardcore Legend also describes his relationships with Stephanie McMahon, Triple H, Ric Flair, and many others throughout. In the May 24, 2006 entry, Foley describes lying awake one night asking himself how many real friends he has made in the wrestling business by writing:

The answer? Not many. Not many at all. I get along with almost everybody. I like almost everybody. I’m genuinely thrilled to see most of the guys (and girls) in our WWE family during the course of my sporadic returns. Bust when it comes to “real” friends — wow, there’s not an awful lot there.

An afterword by Vince McMahon sharing his thoughts about the criticisms regarding him would have added another avant-garde dimension to the book. One could only hope this idea is being saved for an extra in the upcoming paperback version — hint, hint WWE.

The Hardcore Diaries is definitely aimed at the educated wrestling fan although the general audience will not have any significant difficulty following along. Overall, the book accomplishes what wrestling is supposed to do, which is to tell a story good enough that leaves fans satisfied yet wanting more.