Guest column: McMahon botches his spot, and Congress is back

No less Byzantine than the politics of wrestling are those of the United States Congress. Vince McMahon, a brilliant businessman, appears to have miscalculated the latter by declining to appear Wednesday at an omnibus hearing on steroids and sports that was called by Congressman Bobby Rush, chair of the House Subcommittee on Commerce, Trade and Consumer Protection.

The upshot is that an investigation of steroids in wrestling — as well as, perhaps, of other abuses of the health and safety of “sports entertainment” talent — is back on the Capitol Hill radar screen, two months after it got crowded out by the Mitchell Report in the more, ah, dignified sport of baseball. (Earlier developments were discussed in my December 26 guest column for SLAM! Wrestling.) 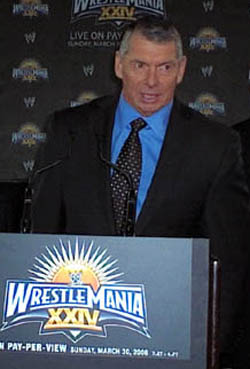 As Rush angrily recounted at the hearing, the World Wrestling Entertainment chairman said he could not participate because his lawyer, Jerry McDevitt, had a scheduling conflict. “I am exceptionally and extremely disappointed,” said Rush, noting that McMahon was the only invited head of a sports organization not to show up. The commissioners of Major League Baseball, the National Football League, the National Basketball Association and the National Hockey League, and the heads of their players unions, were all there to address threatened legislation to force all sports to adopt the more stringent, independent and transparent drug-testing protocols already used by the U.S. Olympic Committee.

That statement alone would have made for a nervous day for WWE stockholders. But Rush went on to show that he had done a little homework and possessed an attention span on the subject of drugs, death and wrestling somewhat longer than that of the mainstream media.

“Steroid abuse in pro wrestling is probably worse than in any professional sport or amateur sport,” Rush said, adding that he realized that wrestling is not a legitimate sport. “The number of deaths in the professional wrestling ranks is startling to say the least. The tragedy of Chris Benoit has been well documented. I want to assure Mr. McMahon that this committee fully intends to deal with the illegal steroid abuse in professional wrestling. And we hope he will be part of the solution and not part of the problem.”

What happened? Let’s try to explain this so everyone can understand. Even all the “serious” sports journalists who look down their noses at wrestling, yet dutifully reported as gospel McMahon’s ridiculous claim that boxer Floyd Mayweather would be getting a $20 million appearance fee at WrestleMania.

Since last summer, two different Congressional committees have been probing wrestling. One is the Rush Subcommittee, which was initially spurred to action by Congressman Cliff Stearns, at the time its ranking minority. He remains a member but relinquished ranking status to take a similar position with another subcommittee.

The other is Henry Waxman’s House Oversight and Government Reform Committee. The Waxman committee was the first to give George Mitchell a megaphone for his December report on the history of steroids and human growth hormone in baseball; Waxman then staged the sensational hearing earlier this month in which Roger Clemens rather unconvincingly rebutted Mitchell and his source, personal trainer Brian McNamee — a performance that will probably get Clemens investigated by the Justice Department for perjury.

Last year I had interactions with both the Rush and Waxman staffs, who said officially that their efforts were cooperative. That may have been true, but Congresspeople are no less immune than the rest of us to turf wars. The Commerce subcommittee perceives Oversight’s mandate as more ambitious than its own. Rush seethed while Waxman garnered attention for the Clemens circus, for in Rush’s mind the real issue is not just the ability to pressure sports organizations through hearings, but also the prospect of writing toothful laws to govern how they’re run. In 2005, the Rush subcommittee had introduced legislation to require Olympics-standard testing across the board, and the Wednesday hearing revisited that topic.

Rush also promised last fall, in an email to a Baltimore Sun reporter, to take a public look at wrestling, and he obviously meant what he said.

McMahon’s motivation for “flipping his finger” at Rush — as another congressman, Lee Terry, colorfully put it — is another one of those secrets to which only he, his wife, his son, and his daughter and son-in-law are privy. If even they, or even Vince himself for that matter, know what he’s up to. 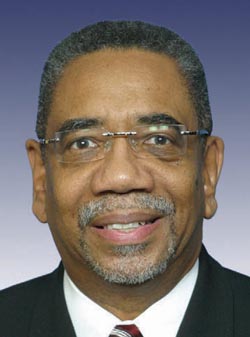 One possibility is that he’s toying with Congress, confident that there’s no such thing as cheap heat, especially on the eve of WrestleMania, and that he’ll be able to handle it all in the end. (Through family intermediaries, he has told the boys that he would show up at any Congressional hearing in a clown wig.) McMahon has on his side money, connections and a feeling among opinion-makers — widespread if misguided — that Congress shouldn’t soil its hands with wrestling, even though dozens of people in the industry are needlessly dying every year.

Another possibility is that the principle of avoiding any kind of regulation or oversight, at almost any cost, is paramount for WWE. Instinctively, one would think that the large and unwieldy Wednesday hearing would have provided McMahon with protection in numbers. But perhaps Vince prefers being singled out to being questioned.

Whatever the explanation, the headline is that C-SPAN wrestling hearings are back in play. This marks an opportunity for Michael Benoit, Chris’s father, to further spread the word not only about wrestling’s culture of drugs, but also about Chris Nowinski’s research on head trauma, which they believe is the central explanation for last June’s double murder/suicide in Georgia.

Newsletter writers and fans also need to seize the day. Sure, all of us are eager to know how quickly Rey Misterio will come back from biceps surgery, and we can’t wait to see Maria’s Playboy spread. But, in the name of decency, let’s also take a moment to tell Congressman Rush what should be done to prevent wrestlers from continuing to drop like flies.

The congressman’s phone, fax and email information is at www.house.gov/rush.