On July 6, Congressman Cliff Stearns, Republican of Florida, issued a press release and began a round of cable news appearances calling for an investigation of steroids in pro wrestling. This was 12 days after the bodies of Chris, Nancy and Daniel Benoit were discovered.

Four months later Congressman Bobby Rush, Democrat of Illinois (chair of the House Subcommittee on Commerce, Trade and Consumer Protection, of which Stearns was ranking minority member), told the Baltimore Sun, “Given recent developments — the impending Mitchell report and reports of widespread abuse in professional wrestling — I believe it’s time we get a formal update on what progress is being made to eradicate steroids from all sports and sports entertainment.” 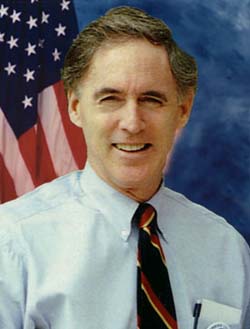 In between, both the Rush Subcommittee and the House Oversight and Government Reform Committee (chaired by Henry Waxman of California) requested background information from WWE and, to a certain extent, from TNA and other promotions as well.

Quietly, Vince McMahon complied with the requests. He also sank new hundreds of thousands of dollars into lobbying operations coordinated by the company’s main outside law firm, Pittsburgh-based law firm Kirkpatrick & Lockhart Preston Gates Ellis. How many hundreds of thousands we won’t know until public filings next year.

Loudly, in TV skits, Vince mocked the committees. Backstage his daughter Stephanie and son-in-law Paul “Triple H” Levesque bucked up the nervous talent by telling them that Vince was making defiant plans to show up at the Congressional hearing in a clown wig.

On December 12, baseball’s Mitchell report was released. But by then the legit sports story was no longer pulling the circus subplot in its shadow. Rather, it was downright overwhelming it. Wrestling had dodged another bullet — at least that’s how most insiders would sum up the deferring of the industry’s day of reckoning and reform for another day/month/year/decade, at a point when several/dozens/scores/hundreds more corpses will have piled up from drug overdoses, attacks of artificially enlarged hearts, exotic forms of cancer and homicidal-suicidal binges, all in the name of our uninterrupted junk entertainment.

Human physics, like wrestling politics, are an odd bird. The rise and fall of Congressional wrestling hearings combine elements of the discovery of the Gobbledygooker and the on-and-off last push for Ric Flair. It starts with Stearns, who two years earlier, as chairman of what is now the Rush Subcommittee, had introduced legislation that would have set a single steroid testing standard and uniform penalties for all sports. Stearns began his July press release and parallel soundbytes by noting, “Between 1985 and 2006, 89 wrestlers have died before the age of 50.”

His staff had pulled the stat from a column by FoxSports.com’s Mark Kriegel, headlined “Congress needs to get involved — now.” Kriegel, in turn, was quoting the appendix of my recently published book Wrestling Babylon. Stearns would proceed to cite that factoid, without attribution.

Though I consider my 1985-2006 death list conscientious, I’ve made no grandiose claims for its epidemiological rigor. My list is contextually superior to USA Today‘s oft-quoted 65 deaths under age 45, 1987-94, and inferior to Dave Meltzer’s 62 deaths of “major league” wrestlers under age 50 in the last 10 years. I note Stearns’ non-citation without indulgence and for the sole purpose of illustrating what motivates “preliminary” Congressional investigations.

Soon Stearns was arranging a photo opportunity at Dory Funk’s training center, the Funking Conservatory, which is conveniently located in the Congressman’s district in Ocala, Florida. But even if Stearns really wanted to go to the mat and call hearings, he did not have that authority, which has rested with the Democratic majority that won control in the 2006 elections. As ranking minority member; Stearns needed the green light of Chairman Rush. By the end of the year, Stearns wasn’t even ranking minority member at Commerce, Trade and Consumer Protection; he had given up that post for the same one on the Telecommunications and Internet Subcommittee. 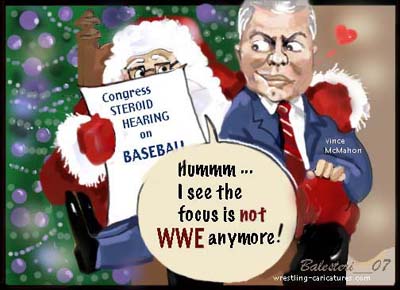 Now that the immediate hearing prospect has played itself out, perhaps it’s not a bad thing that baseball and wrestling investigations aren’t conjoined. Their drug problems flow from opposite, and counterintuitive, sources. It’s the old existential conundrum fans love to bat around: The last generation’s baseball records have been fake, but wrestling’s avoidable and unacceptable mortality rate has been real. And you can’t legislate irony.

Another key difference is that baseball has a talent union, arguably the most effective labor organization in America, which in a span of four decades has driven its members’ average annual wages from something like $19,000 to more than $2,000,000. Steroids first reached untenable levels because it was in the owners’ interests to look the other way. Then, if they ever were interested in reining in the problem, they found that their employees were collectively strong enough to resist solutions.

Wrestling has no talent union, and for the good and simple reason that the owners not only build the playing fields, they make all the out-or-safe calls. Therefore, I see cleaning up wrestling as something more along the lines of the safety reforms imposed on the movie industry after actor Vic Morrow and two young children were killed in a 1982 accident on a action-film set.

But that doesn’t seem to be happening. I’m assuming that the Congressional committees don’t have a January swerve up their sleeve, or “Mr. Kennedy” isn’t on the verge of murdering Hornswoggle for cheating him out of his patrimony. In an Orwellian world where wellness policies are not well, the other shoe of life’s wrestling angle is not quite ready to drop, after all. At 100+ dead and counting, it’s still in the tease stage.