New book comes to grips with wrestling in the Ottawa Valley

For decades, these Ottawa Valley events and larger-than-life characters have been celebrated in song and story. They populate the productions of Killaloe-based Stone Fence Theatre Co., which has the motto, “Putting the Ottawa Valley on Stage.”

Equally colourful but unsung are the Valley “rasslers,” particularly brothers Larry and Alex Kasaboski from Renfrew who became the embodiment of the flamboyant spectator sport in the region. 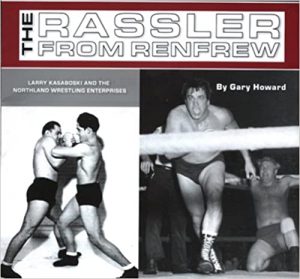 Now these old-time rasslers have gained a leghold on fame.

A big fan who grew up on the regular matches held in Pembroke, Gary Howard realized no one had ever written a historical account of those action-packed years.

So Howard decided to go to the mat in righting the wrong.

Howard put it all in The Rassler from Renfrew. Released by Renfrew’s General Store Publishing House, it’s a 152-picture-packed book telling the tale of the Kasaboskis and their “timeless values such as honesty, integrity and loyalty.” The soft-cover tome sells for $19.95.

Why “rassler?” Howard explains that was often the pronunciation back then and he thought the title would have a “nice local flavour.” He’ll be describing the days of the rassling Kasaboskis during a visit to the Ottawa Public Library’s main branch, 120 Metcalfe St., March 12 at 7 p.m.

“From the opening bell, we fell hook, line and sinker for these wrestlers and the matches. Eventually, everyone knew or suspected the bouts were predetermined, but no one could ever quite explain the intricacies and hidden secrets of the game.”

The main star was Larry Kasaboski who doubled as a major promoter through his Northland Wrestling Enterprises, which toured from points in Eastern Ontario to the province’s north and into Quebec.

In 1934, at the height of the Great Depression, Larry exited his father’s fields as a teenager to begin his professional mat career, following by five years in Alex’s high-kicking footsteps.

He’d been a wrestler for 12 years when he launched Northland Wrestling in 1946. Larry, often dubbed the “Wrestling Farmer,” always billed the sport as an exhibition of science, skill and strength.

Howard maintains Larry deserves recognition in his own right because, in addition to gaining prominence as a wrestler and promoter, he was very much a part of the Renfrew County landscape as a farmer, husband, father, neighbour and civic booster.

Coming full circle, Larry died of a heart attack on his Renfrew County farm in 1985. He was inducted to the Renfrew and Area Recreation Hall of Fame in 2001.

A student of professional wrestling then and now, the author says it was those early days of playing small towns across North America that gave rise to the glitz and glamour of today’s high-profile, ultra-staged, mayhem-generating contests.

Some of the hoopla had been introduced, with the competitors wearing long velvet robes or short velour jackets, eye-catching trunks and high-laced boots, usually black but sometimes white depending on an individual’s level of flashiness.

In a setup similar to Saturday movie matinees where cowboy stars Roy Rogers and Gene Autry took on the bad guys, wrestling had its distinct heroes and villains.

“Any way you sliced it, it was the white hats against the black hats and somehow you knew the good guys were going to come out on top, even if sometimes it took three or four weeks to mete out justice.”

For the most part, promoters such as Larry Kasaboski depended on the charisma of star performers to draw a crowd of regulars. “And when a bear or alligator was featured on the card, there were more than a few who came out of sheer curiosity.”

Researching and producing The Rassler was as “exhilarating as an airplane spin, as jarring as an elbow smash and as satisfying as a clear-cut victory over the meanest villain of all … Father Time,” Howard wrote in the introduction of his book.