I attended my first wrestling matches promoted by Larry Kasaboski at the old MacKay Street Arena in Pembroke, Ontario in 1949 and 1950. 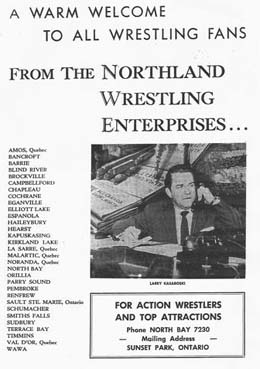 I did not attend many matches at this old arena because of my tender age, but from 1951 (when the shows were moved to our new arena, the Pembroke Memorial Centre), until 1960, I missed very few.

This essay is my remembrances of that decade, from 1950-1959, that I always refer to as the Golden Decade of Wrestling in our town.

Promoter Larry Kasaboski (I never heard him referred to as Babe) began operating Northland Wrestling Enterprises out of North Bay, Ontario in 1945. The circuit would grow to include Pembroke, North Bay, Sudbury, Sault Ste. Marie and several other Northern Ontario towns as the main stops and also later in Eastern Ontario. Distance traveled was 100 to 200 miles between destinations by car and because of the fierce northern winters, the circuit primarily operated from early summer to late fall. To be sure it was a summer circuit and when the last shows ceased, the wrestlers would head out to various circuits throughout North America. Kasaboski himself would wrestle and scout new talent in various territories for the next season, and used the aliases Larry Kash in the States and Larry Raymond (with the francophone pronunciation) in Quebec.

Basically the talent in his promotion consisted of:

Many of the wrestlers stayed at Sunset Park on beautiful Lake Nipissing in North Bay. The resort was owned by Herb and Dinty Parks and, when Herb died in the early 1950s while on a hunting trip, Dinty took over as owner/operator. Golden Boy Bill “Dinty” Parks died last winter at the age of 85.

Terminology like “heel and face” was not in our vocabulary. We simply referred to the wrestlers as good guys or bad guys. Occasionally a bad guy would turn good but once a good guy always a good guy. Some wrestlers refused to interact with the fans and kept their ring face on while many were agreeable to autographs and photographs.

Crowds were usually small — much less than 1,000 per show — but loyal and enthusiastic. Most people dismissed wrestling as being fake. They would not consider it as sport or entertainment. The term kayfabe, in relation to wrestling as a deception or con was never used. The shows received some press because the local sports writer doubled as ring announcer and timekeeper.

Kasaboski, a veteran wrestler from the mid-1930s, was the glue that held it all together as promoter, wrestler and referee. He interacted with the fans and was great with kids. He was the consummate showman and worked all the angles and storylines. He was the master of the grudge match sometimes stretching the grudge over three or four weeks, and fought the likes of Evans and Fozo and all the villains of the day.

He surrounded himself with a core group of wrestlers like the Parks Brothers, Bill Curry, Benny Trudell, Frankie Hart and Louis Papineau, who all came back year after year. Referee Joe Dempsey was often booed more than the most hated villain and was prominent in some of the storylines.

Some of the brightest future stars of the mat also cut their teeth on his circuit. A slim Dr. Jerry Graham was a face and a fan favourite. In addition to wrestling, Graham and Chuck Molnar toured with a wrestling bear, Gorgeous Gus, and as a special attraction before his matches, Dr. Jerry would hypnotize volunteer members of the audience and put them through ridiculous scenes and paces.

An early villain was Professor Roy Shire accompanied by his manager Jackson Hunter. Shire was the picture of arrogance and superiority decked out as an academic. Reggie Siki appeared here as an up and comer and later attained greater fame as Sweet Daddy. He also appeared in local clubs as a country and western singer. Luther Lindsey, Ricky Waldo and The Black Panther (Jim Mitchell) also took the Northern Ontario tour.

The original Gorgeous George (Wagner) with Cherie made a brief stop in the area, now bald after being shed of his golden locks by Whipper Billy Watson at Maple Leaf Gardens. And the other Gorgeous George (Grant) a fine showman and wrestler in his own right was a main-eventer for several years.

But through the years, the local favourites were Kasaboski, North Bay products Parks and Bill Curry, the popular Papineau and Dave Sims from Smith Falls. Dirty Don Evans was one of the top villains and when not feuding with Kasaboski in Pembroke, would often tag team with him in North Bay. Bad Benny Trudell and Tarzan Zimba billed themselves as the Lumberjacks out of Kirkland Lake. Throw in Tor Yamata, Jack Bence, Ramon Zapata, Lord Anthony Spears, Elephant Boy (complete with Afro hairdo), Red Killer Kirkpatrick and Leo Wallick and you had continuous mayhem. For good measure add Baron George Sebastien Arena, Tony Borne, Wild Bill Savage and Dutch Schultz and gently stir the pot.

Most notable masked men who seemingly went on forever before being defrocked were The Golden Terror (Red Vagnone) and The Mask (Ken Kenneth) but in Pembroke we never did know the identity of The Masked Twins. Who were those masked men anyway?

Surprisingly there were no female wrestlers on Kasaboski’s circuit, at least not in Pembroke, but special attractions and features such as Primo Carnera, Hans Hermann, 600-pound. Happy Farmer Humphrey, 7-foot-tall Giant Goliath, former ballet dancer Ricki Starr, the Swedish Angel, and Tuffy Truesdale and his wrestling alligators all made brief stops.

In the early days of television, wrestlers billed as TV stars were also in evidence on occasion such as Whipper Billy Watson, Lord Athol Layton, George and Sandy Scott, Gene Kiniski, Ivan and Karol Kalmikoff, Mike Valentino (Baron Scicluna) and the entertaining Pat Flanagan. Towards the end of the decade smaller wrestlers such as Pat O’Brien, Carl Von Stroheim, Juan Lopez and Bob Boyer held the spotlight at the PMC but the crowds were dwindling with each passing year.

By then, I was in my late teens and wrestling no longer held the lure for me it once had. Kasaboski continued to promote shows into the 1960s and 1970s with wrestlers like Terry and Ronnie Garvin and “Cowboy” Bob Kelly but the glorious 1950s were already history.

But wrestling never died in the north until Kasaboski, who was truly Mr. Wrestling in this area, passed away in Renfrew, Ontario in 1985, where he had retired to his farm.

Only then did this great showman, promoter and mat pioneer take the final three count.