CALGARY – Usually when the WWE rolls their TV cameras into the Saddledome in Calgary, you know you are in for an exciting evening of sports entertainment. Moments like the classic Chris Benoit vs. Steve Austin title match in 2001, Edge vs. Kurt Angle in a steel cage on Smackdown in 2002, and the entire Hart family celebrating at the end of the In Your House pay per view in 1997 are still spoken about by mat fans.

While the May 30, 2005 RAW broadcast won’t stick out in many peoples’ memories, the crowd as usual was ready for action from the moment local stars Ted Hart and Harry Smith took to the ring to warm up the crowd. The cousins put on a clinic and the second-best match of the night with Smith getting the duke with a powerbomb. Local talent continued to get a bit of the spotlight with Wavell Starr losing to Tyson Tomko via knockout and Synn dropping a bout to William Regal. The Heat tapings also featured WWE talent that made their names in Calgary, with Chris Jericho defeating Simon Dean and Lance Storm returning to answer Maven’s “challenge to any ECW superstar” and take a win.

The Heat taping would be the end of the wrestling for the night, as the actual RAW broadcast only featured four matches amidst a swimsuit competition, backstage segments, Chris Jericho’s Highlight Real, a Triple-H interview and the Masterlock challenge. 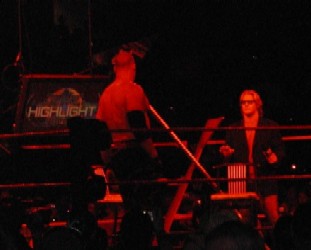 The crowd was certainly good at entertaining itself. Whether chanting “separate” at La Resistance, chanting “Taber Corn” in tribute to their favorite vegetable grown in Taber, Alberta, or the more common “You screwed Matt (Hardy)” chants at Lita, the crowd was lively all night.

The crowd seemed tired of the long talking segments by the time Triple-H “live from the studio” (he was backstage at the event) came on the air. The crowd seemed more interested in chanting “hey goodbye” at a fan being escorted out than listening to the promo.

Without a doubt the stars of the night were Chris Jericho and Christian. Jericho, who did double-duty, cut an off-air promo slamming Calgary for giving Lance Storm a better response than him in an attempt to get the crowd to turn against him, but it simply wasn’t going to happen. Christian seemed legitimately floored by the huge reaction his promo got as his star continues to rise.

At the press conference announcing RAW in March, Batista promised to return to Calgary with some new gold jewelry. He fulfilled his promise, greeting the roaring dome crowd with the World Heavyweight Championship he won at Wrestlemania 21. The first-time match against Muhammad Hassan had the crowd excited, but the disqualification finish seemed to confuse most people. After leaving Hassan and Daivari a bloody mess, Batista headed to the back, pausing to bask bow to the crowd in thanks.

The main event handicapped match that had been hyped for two months with HHH and Ric Flair against Batista didn’t happen, instead fans filtered out, some to hang out behind the arena in hopes of getting autographs, others off into the dusk, waiting for the next time WWE’s cameras roll into town.

It may not have been the best show ever, but it the fans made sure they had fun regardless.