Deepak Massand: A journey from Pakistan to pro wrestling to politics 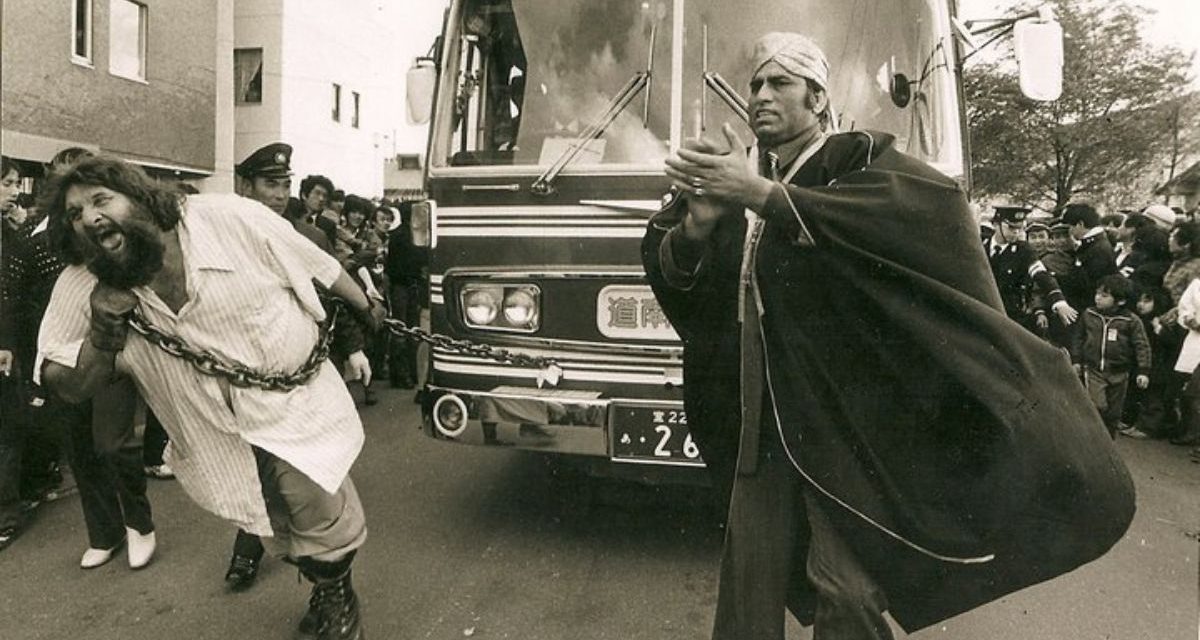 Deepak Massand, perhaps better known as pro wrestling heel the Sheik in Montreal or manager Deepak Singh, offers up a fascinating and absorbing tale of his life in an autobiography recently published in India entitled Deepak Massand: An Autobiography.

A Hindu born in November 1942, Massand entered a violent world in Moslem-dominated Pakistan amidst civil disobedience against British rule. That discord eventually turned against his fellow Hindus as Indian independence from Britain created India and Pakistan, states drawn along religious lines. 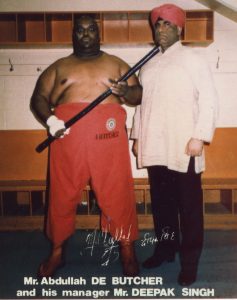 Abdullah the Butcher and his manager, Deepak Singh.

His young life was marked with violence. Massand’s experiences included Moslems violently invading his family home one night, and equally if not more terrifying, Massand, at one point, coming upon a train pulling freight cars stockpiled with bloody corpses.

With riots and killings breaking out in his ancestral home of Rohri-Sukkur in West Pakistan, Massand and his family were forced to flee, escaping to the relative safety of Delhi in January 1948. But as no small reminder that civil unrest continued, Mohandas Gandhi was assassinated only days after their arrival.

Massand’s parents told him he was born under a masal, a dark star that “causes a bad outcome in any life.” They would blame the masal for his poor health in his early years, as well as his “uncanny ability to cause problems.” He too would later point to the masal to explain his failures in both matters of love and business throughout his life.

“Every time I went up (in life) it (masal) came down,” Massand told Slam from his Montreal home.

His temperament consumed him during his teens and he wound up in many fights and arrests. But an interest in wrestling, first sparked in grade school, saved him from a fate in jail. At the age of 15, Massand joined a local khara, a wrestling school in Delhi, where he grappled and beat many men larger and stronger than he in dark, wetted down clay pits. This became a world in which he could escape and let out his aggressions as Deepak “The Invincible.”

A western magazine a childhood friend gave him, one that depicted North America as a paradise populated by millionaires, gave Massand his first thoughts to journey there. His desire to live in North America became emboldened years later by a meeting with Sadhus, Holy Men whose prayers Massand interpreted as meaning he would be crossing the ocean.

Persistence and some luck got him an opportunity to work at the East Indian pavilion at Expo ’67 in Montreal. While bouncing around barman jobs, his desire for a wrestling career continued. But in speaking to various promoters, he was shocked to learn the differences between the shoot matches he had become accustomed to and the “worked” matches of professional wrestling.

Still, he took his shot and became a successful heel as the Sheik. (Hardly the first or the last person to use that name.) But his entanglement in an ongoing feud between promoters he’d worked for, Paul Vachon and Johnny Rougeau, made the gimmick short-lived. Massand’s career also took him to Calgary, where he trained with and wrestled for Stu Hart. A friendship with wrestler The Great Antonio put Massand into a managerial role and dates on Japanese cards, although his professional relationship with the volatile Antonio would soon dissolve.

“Don’t ever let anyone tell you that wrestling is an easy business,” he wrote.

By 1985, Massand was managing Abdullah the Butcher as Deepak Singh. The violence of those matches, however, brought nightmares to Massand, as he would relive the smoke-filled streets of Karachi, as well as the screaming and blood. Promoters’ intentions on using him as a jobber to enhance other talent further convinced him it might be time to quit.

“Why should I lose my pride?” he asked rhetorically in an interview, explaining his competitive nature and success he had enjoyed in the Indian shoot style arena.

Massand retired and sometime thereafter rediscovered himself as a man of peace determined to follow Canada’s political values and “the ethics of a democratic society.”

“I understood one thing: I could not live through another Pakistan,” he wrote.

Massand focused on national unity, and became involved at grassroots levels on the constitutional renewal process and the 1995 Quebec referendum. He took a stand during the Oka Crisis as well, subjecting himself to a 30-plus day hunger strike.

His political involvement also included eight failed election runs. Massand often seemed to be used as a sacrificial lamb — one of his losses came in the 2000 federal election when he ran as a Progressive Conservative candidate against the Liberals’ then-finance minister Paul Martin.

His political life ended in 2003 following differences with the Stephen Harper-led Conservatives. Massand compared politics to wrestling, describing both as volatile, pointing out how momentum and the promises from those in charge can abruptly change.

Massand’s book is an interesting read. In addition to his wrestling career, which spanned from 1971 to 1986, Massand also enjoyed acting stints in North America and Japan. But considering the many places Massand takes his reader, his book could certainly be longer than its 123 pages (not including 30 pages of correspondence included at the end). The large colour photo collection he includes in the appendix shows the reader many of the celebrity personalities Massand has met during his many callings.

He continues occasionally working in movies, scoring speaking and extra roles. Back problems, however, have slowed him down, as has muscular dystrophy, a condition doctors first detected in him in 1979.

The masal he claims has plagued him throughout his star-crossed life continues to haunt him to this day. Even his book deal has proven unlucky, as his Indian publisher left him out of pocket and without any distribution deal.

“The masal is still on my back,” he said.