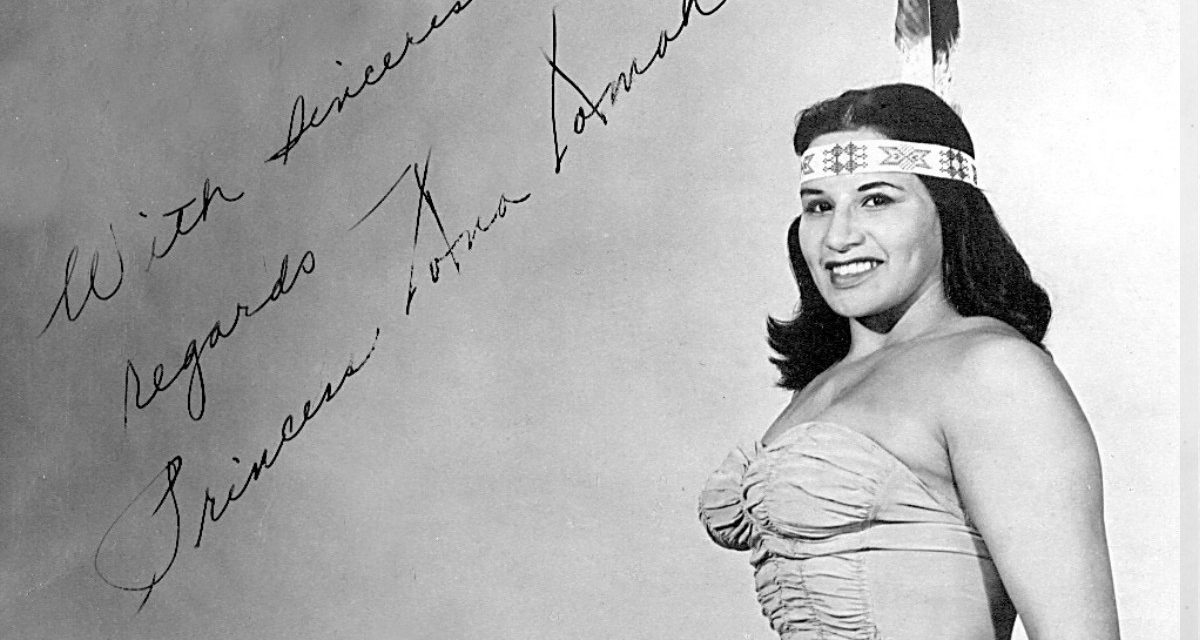 Amid the turmoil of late June, and the major media coverage of Chris Benoit’s horrible actions, the passing of woman wrestler Princess Tona Tomah in Phoenix received little attention. It’s unfortunate because she lived a full, fascinating life.

One of the few legitimate Native American professional wrestlers, Tomah toured the continent, dabbled in boxing, helped promote, and raised a gaggle of kids through a series of marriages. She died June 15, 2007, at the age of 72.

Born Mercedes Waukago on June 5, 1935 on the Whitearth Indian Reservation in Minnesota, she followed a sister into athletics and wrestling, working on the carnival circuit at the age of 14, taking on all-comers: men, women, and even de-clawed baboons. 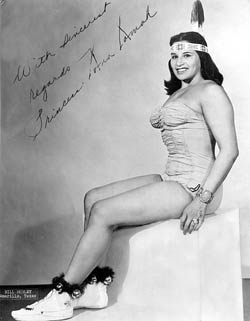 According to her youngest son, Piper Carle, his mother desired more. “She wasn’t all that enthused about living on a reservation. She wanted bigger and better,” he told SLAM! Wrestling.

In the 1950s, there was only one man who controlled women’s wrestling — Billy Wolfe, of Columbus, Ohio. Not only did Tomah seek out Wolfe for training, she was also, apparently, married to him for a short while. She was 18, and he was in his 60s, said her son. “I know they separated because of his indiscretions. He had affairs on her, and stuff like that. That was the parting of the ways. She was his protégé,” he said.

Taking advantage of her heritage was a natural. Princess Tona Tomah would enter the ring in a full Indian headdress, and her war cry would get the crowd going. “She had the whole outfit,” said occasional opponent Laura Martinez. The name “Tomah” is in reference to Tomah, Wisconsin.

Usually a babyface, when she performed on a reservation, her opponent would be a target of vitrol; in her autobiography, Penny Banner tells about almost being scalped at such a show when she took on Tomah. “The fans liked her. They thought she was real good,” said Martinez.

“Princess Tomah is a Chippewa Indian who is fast heading for feminine wrestling fame. This 22-year-old Indian girl was born on a northern-Minnesota reservation,” reported the Tuscon Daily Citizen in 1960 (obviously having been worked on her age).

Princess Tona Tomah was a pioneer during a trip north to the Stampede Wrestling promotion. “Tona was a good solid hand. She had plenty of fire, and was a good gate attraction, especially with First Nations folks as she was about the first Indian girl wrestler to work here,” recalled former Stampede promoter and photographer Bob Leonard. “I recall her having her two very young kids on tour with her here, and that was quite a handful for her, but she seemed to really enjoy having them along.”

Even her son, Piper, can’t exactly pinpoint the number of marriages his mother had. But he can list off his siblings:

In the obituary in the Phoenix newspaper, Piper, Tona Tomah Illa and her daughter — Tomah’s granddaughter — Javette Goostree are the only survivors listed. Piper adhered his mother’s wish not to list her “disrespectful” offspring.

“She had a hard life and a lot of bumps. She raised five kids singlehandedly and she never picked up a straw, a needle, a pipe. She wasn’t a drug addict. She didn’t smoke cigarettes. She was a good mother,” insisted Piper, who quit his job as a carpenter to be his mother’s caretaker in her final months.

Much of Princess Tona Tomah’s life was centered around Arizona, where she found a home and influenced many people. She was involved in the Native American community, helping raise money for the Warrior Boxing Club. For a fundraiser, she even got in the ring after 25 years to box again to raise money. According to Piper, his mother was in the first sanctioned women’s boxing match in Arizona, at Phoenix’s Exhibit Plaza. “That was in six rounds, and she won by unanimous decision. My mom had boxed 13 men before she was allowed to box women legally.”

At the West Side Athletic Club in the 1960s, she helped Eddie Sullivan get into pro wrestling, and knew Wayne Coleman before he was ever Superstar Graham. Betty Clarke, who became a pro wrestler, was a babysitter for Tomah at one point.

Another was “Big” Bill Anderson, who would go on to help train wrestlers like Ultimate Warrior and Louie Spicolli. “I first met Tona in 1973 while I was training and working for Kurt Von Steiger as a ring announcer,” said Anderson. “She was around every promotion that came into Phoenix for the next 30 years. The wrestling business was in her blood, and she couldn’t stay away from shows.”

According to Arizona historian and former wrestler Dale Pierce, Tomah was around Phoenix’s Madison Square Garden all the time, and ran some wrestling shows of her own in the mid-1980s. She would often help out at WWF shows in town, shepherding the ring when necessary or working the door.

“Tomah knew numerous shoot moves,” said Pierce. “She taught me and several others a front facelock which, fortunately, I only had to use once in a bout. This was when a new ref jumped in the ring on me on promoter’s orders and was wearing street clothes. I thought he was a mark.”

“She was a tough woman,” confirmed Anderson. “Many male wrestlers were afraid to anger her. Thankfully, we always were very friendly with one another.”

Another friendship was with the late Dr. Jerry Graham, said Pierce. Arizona lore tells of a time where she and Graham were either arrested or barely escaped arrest when they were drunk and decided to take target practice on the lights of a giant cross on a church in Utah.

Tomah’s career would down in the 1960s, and she was involved in law enforcement for years, as well as keeping up with her passion for boxing and wrestling. In 1993, she was honored by her peers in the Ladies International Wrestling Association (LIWA) in Las Vegas.

For the last 20 years, “she was content with herself,” said Piper Carle. “She pretty much lived by herself. Her other sons would kind of come in and out, back and forth.”

A bad car wreck disabled Tomah. “The last few months, she couldn’t walk anymore, so she was homebound. I quit my job and became her home healthcare provider. She was a diabetic for over 40 years too,” said Piper.

“My mom pretty much knew she was passing away. Once she couldn’t walk after being that physical all those years, it took her will to live, it seemed to me. And when her only daughter, the only one she really wanted, died, there wasn’t a whole lot for her.”