MONTREAL — The Great Antonio, a well-known strongman who once impressed Montrealers by pulling city buses, has died. But he was much more than just a strongman: Pro wrestler, actor, raving madman, celebrity, extravagant self-promoter.

Antonio Barichievich, 77, died Sunday night after suffering a heart attack in a grocery store. But his was an unique story, to say the least, and no doubt the facts lie somewhere to the edge of the previously-published stories of his life.

Named ‘Best Montreal weirdo’ by the Montreal Mirror entertainment newspaper in 2002, Barichievich was born in Yugoslavia in 1925, of Siberian descent. He worked at age six with a pick and shovel, and by twelve, had graduated to pulling trees out of the ground with a cable around his neck. At age twenty, in 1946, he came to Canada and learned of the history of the strongman in Canada, names like Louis Cyr, Victor Dellamarre, and the Baillargeon brothers. 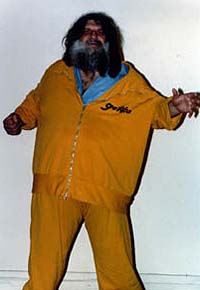 Paul Vachon wrote about The Great Antonio in his self-published book, When Wrestling Was Real. “He was truly a character, in a business that by nature is full of unusual characters. Antonio started his career as a scrap yard worker, a scavenger, and a resident. Here was a guy, 6-foot-4, 450 lbs., that worked not only in a scrap yard but lived there in a shack that he made for himself out of old planks, cardboard, cement blocks, and the hood of a junked car. The owners of the scrap yard let him stay there in exchange for the work he did moving scrap iron around,” Vachon wrote. “Nobody ever really knew his origins, but he spoke in a mixture of French, Italian, English and Russian and I think a little Hungarian was thrown in the mix.”

Barichievich got stronger moving the scrap metal around, and graduated to moving cars and buses around the lot. He showed up at a Montreal bus terminal, moved a bus in front of many people and a legend was born. Barichievich was smart enough to capitalize on his feats of strength, getting much media attention, and printing up postcards to sell with photos of his accomplishments. Some of the more notable feats of strength included pulling a train loaded with lead for 65 feet, and pulling up to four buses at once, loaded with people. (The secret, according to Vachon, was to use the momentum of the first bus to move the other buses, leaving enough slack between the vehicles.)

Sid Stevens, director of Sun Youth, a Montreal community-aid group, recalled one feat performed by the giant, who stood 6′ 4″ and weighed about 500 lbs.

“I remember he pulled a bus on Saint-Laurent Boulevard — the 55 — and it was full of passengers,” Stevens told Montreal radio station CJAD. “The bus driver was pleading with him not to because he was kind of late on his schedule. But he didn’t care. He just grabbed the bus with a rope and pulled it. And when the police officers came, they just stood and watched him and didn’t even try to interfere. Imagine getting this type of individual into a police car.”

Jonathan Goldstein of Saturday Night magazine did a short story on The Great Antonio in March 2000. “Antonio says that he’s just naturally strong, that it doesn’t matter whether he trains or not. So where does strength come from? What makes one man stronger than another? It isn’t only in the size or the muscles. It’s something else. Perhaps it is will,” Goldstein wrote and then quoted Antonio: “Me an expert on physical strength. To understand is to do it, but no one can do it. Six billion in the world. No energy No strength. Nobody understand, you understand?”

There is an equally fascinating section on The Great Antonio in Bill Richardson’s 1997 book, Scorned & Beloved: Dead of Winter Meetings with Canadian Eccentrics. He recalled meeting with Antonio at a Montreal donut shop, where the giant of a man began pouring out oodles of clippings proclaiming his greatness.

“The headlines just keep on spilling, one after the other, all of them clamouring to be heard after their confinement in the green garbage bag. All the clippings tell more or less the same story. International travel. Meetings with celebrities. Movie roles in films that required convincing autochtones, such as Quest for Fire and The Abominable Snowman,” Richardson writes. “As Antonio shows off his impressive collection of cullings, one by one by one, he annotates the stories in his associative, rambling, stream-of-consciousness style. He gets very loud. A Strong Man show ‘n’ tell unfolds right there, in the middle of Montreal in the middle of the afternoon in the middle of Dunkin’ Donuts.”

After his feats of strength made him a name in Quebec and to a lesser degree around the world, Barichievich tried to break into wrestling by bugging local promoter Eddie Quinn, and showing up at the Montreal Forum challenging wrestlers. Continually rebuffed in his efforts to become a grappler, Vachon says that Antonio just started promoting shows himself, usually with him going over in a battle royal main event.

Eventually, with the wrestling magazines clamouring over the potent self-promoter, a few grappling gurus gave him a shot, including Stu Hart in Calgary. Percival Al Friend was a young wrestler, and wrote about his memories of The Great Antonio on his web site. “He had a huge beard and long hair parted down the middle that hung to his shoulders. I had seen strongman stunts that he did in Montreal and Quebec City, like pulling a bus loaded with people down a main street using a chain and harness made from heavy leather that he hooked himself into. I even saw them hook him up to a diesel locomotive, and he pulled it down a set of tracks for about a city block,” Friend wrote. “I never had the opportunity to wrestle with this guy, but then again, after seeing all the stuff he did, I am not too sure that I would have cared to match wrestling holds with the guy. Antonio also loved garlic. He would eat clove after clove of the stuff, as he said it gave him lots of internal strength, and it kept his heart good. He never had too many dates with even the worst looking gals that followed the guys around the arenas. The truth was that his body reeked from the garlic.”

According to Vachon, Antonio was simply “unmanageable” for wrestling promoters, who were used to getting their way. “He was a Prima Donna (sic), and when he saw the big crowds he figured it was all because of him.” ‘The Butcher’ said that on one occasion, Antonio was in Japan and was proving difficult to work with. He refused to lose to Japan’s top star, Rikidozan, which resulted in thugs beating Antonio up and shipping him home the next day.

For the last number of years, Barichievich seemed comfortable being a well-known weirdo around Montreal, someone that everyone had a story about seeing somewhere, usually on the subway, or popping up unexpectedly in front of a city bus, wanting to pull it. Claiming to be a descendant of extraterrestrials, he peddled pencils and his postcards everywhere. His hair grew even longer than during his wrestling days, with dreadlocks that descended to the floor and the bottoms wrapped in electrical tape, which made it possible for him to golf with his hair. On a handful of occasions, he would attend local wrestling shows, usually to visit old colleagues like Paul Leduc or Deepak Singh.

“I walk towards him and he gives me a big friendly wave,” wrote Goldstein in Saturday Night. “The Great Antonio is cute, like those big furry monsters from the Muppets, but The Great Antonio is also intimidating, even at seventy-five. Standing before him, I feel the way I did when I was four and an adult was getting ready to pick me up and squeeze me.”

In his enormous bag of clippings, Antonio would pull out photos of himself with luminaries like Michael Jackson, Sophia Loren, Liza Minelli, Clint Eastwood or a letter from President Bill Clinton’s office.

In Scorned & Beloved, Richardson perhaps puts it best of the last, loony years of The Great Antonio’s life. “Perhaps it’s not so surprising that he chooses to dwell in the marble halls of his halcyon days. He trails a magnificent past, that’s for sure, and God knows he worked hard for whatever rewards he has received, as any of the bus-pulling photos can attest. He worked hard with what he had, with strength, nerve, and more than a little gall.”