Crimson had a feud with Sabu during the week, culminating in a highly anticipated clash on the final night of the show. Crimson defeated Sabu, but had nothing but praise for his skill. “For a guy with one arm he has been doing some amazing stuff. His trademark triple-jump moonsault, he is landing it so that not only is he not hurting his opponent when he lands, he doesn’t hurt himself either. That takes a lot of skill and talent. It’s not that he’s crazy, well, I’m sure he’s slightly crazy, but he is that damn good and that is all there is too it.” 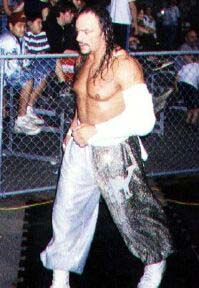 For Wavell Starr, watching Sabu work despite the injury was a source of inspiration. “It was gut check time. Some people may have had bumps and bruises or been tired, but no one was hurting like him. Sabu was injured, no question about it. I don’t think he should have been there, he probably should have been at home, but he showed everyone, the fans, the workers what work ethic is all about. He worked his ass off and did what he could, and that is a good lesson and very inspiring.”

Seemingly invincible to pain, Sabu didn’t show any of the agony he had to be feeling in his arm. The cast he had was a hard cast, but by the end of the week he had taken so many bumps on it, it was shattered.

The dedication brought about the question, is there anything Sabu won’t do? He has worked through many injuries, most notably when his neck was broken in a match against Chris Benoit (and thus “The Crippler” moniker was born) and missed little if any time. Apocalypse and Juggernaut both wrestled him during the week and had been on tour with him in the past. Said Juggernaut, “I have no idea what it takes for Sabu to say ‘I can’t do it.’ I’ve never seen him say it.”

Added Apocalypse, “I’m pretty sure you could cut off his foot and he would still say ‘Eh, I’ll wrestle.'”

“I’ve been amazed at the fact that he is tough enough to do this, the great matches he has had with one arm, and his body control. He is hitting all of his normal moves and spots and is able to adjust his body in mid-air to compensate for the fact that he can’t land on his arm,” said Callis. “He really is a phenom in this business.”