The 23-year-old told SLAM! Wrestling his journey down under was “a vacation where I threw wrestling in, rather than wrestling and throwing in a vacation,” and although the main purposes of the trip were to visit some family members and view the sights, the Canadian sure did enjoy the opportunities he got to wrestle.

On July 12, he experienced the Australian brand of wrestling for the first time while competing at World Championship Wrestling Australia’s (WCWA) ‘Major Impact 5’ promotion, held in Surfers Paradise, Queensland, at the Troccadero Entertainment Centre. Asylum’s opponent on that occasion was Violent Bob, a masked grappler who he described as “La Parka on heavy drugs.” The 5’11”,. 245-pound wrestler went ‘over’ in the encounter following a TKO, and was actually quite pleased with how proceedings went. “I would’ve liked to have gone in there and had a 20-minute match or whatever, and get some quality wrestling in there, but for what we did, we were the first match, we have to get them (the crowd) in, get pumped, then get out, so it was pretty good. It worked out.” 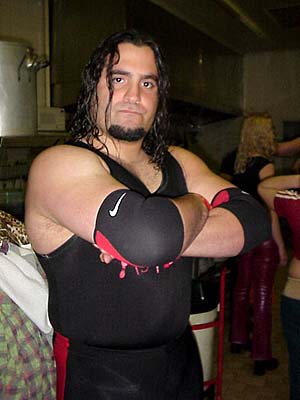 A week later he found himself travelling over 1,200 kilometres south of Queensland and towards Victoria, where Professional Championship Wrestling (PCW) had him pencilled in for an appearance. The opponent was Mad Dog McCrea a wrestler that, true to his namesake, is fearless and excels in encounters of a hardcore nature. It was a major contrast when you consider Asylum, who was trained at Ron Hutchinson’s Pro Wrestling Gym in Toronto, has a style based on technical and hard-hitting wrestling.

The match was scheduled to be a straight-out contest, and although it remained that way throughout, with McCrea coming home with the spoils after raising a shoulder on a German-suplex pinfall attempt by the Canadian in an entertaining 12-minute showdown. Asylum said there were some indications that the promoters would’ve liked to see some ‘hardcore’ included. “I know [the officials] were dying to pull a table out, and there was actually a table under the ring that they said they were gonna use ‘just in case’,” he explained. “I knew that that means [the promoter] really wanted [McCrea] to use that table, and that’s fine with me because hardcore wrestling has its place and things like that, and I’m not against it at all, but I don’t think we needed it and from talking to [Mad Dog] it sounded like he kinda wanted to get over a little more as a wrestler and I figured it’d probably be best if we stay away from the hardcore stuff.”

Currently in his second year as a professional wrestler, Asylum enjoyed the challenge of working on the mat and going hold-for-hold with the technically sound, but underutilised (in that department) McCrea. Another challenge which he experienced on the PCW show was wrestling in front of a dismal crowd of approximately 65 patrons. “It’s harder to get 65 people behind you than it is to get a packed house behind you,” explained Asylum. “I think it’s actually a really good experience, not that I’d like to do it that often, but when it happens it teaches you a lot about the business, so I try not to get discouraged and just go out there like it’s a packed house.”

Asylum indeed didn’t get discouraged, and his derogatory comments towards Australians on the mic elicited the biggest heel reaction of the evening – a good achievement considering the size and somewhat subdued temperament of the audience. “When I went out there I thought it could go either way because when I came out, it sounded like they wanted to get behind me because they were unsure of which way I was going in terms of heel or face,” he stated. “And then the first thing I said negatively about them, they jumped all over it…. I got some pretty good heat I think.”

The Canadian powerhouse was surprised by the “friendliness” and welcoming nature of both the WCWA and PCW locker rooms, and is considering a return to Australia “solely for the purpose of wrestling” in the foreseeable future.

But for now, Asylum needs to refocus his energy on becoming a mainstay on the Ontario wrestling scene once again.

Prior to going on vacation, he was embroiled in an intense feud with the talented Jaguar Vijay Singh over the AWF heavyweight strap. In February, Asylum captured the strap from Singh in a 20-plus minute contest which he rates as one of his best performances to date. Singh upended him for the title at the company’s following show, and then in April, at ‘Risky Business’, Asylum teamed with Joey Knight to defeat the combination of Singh and ‘Codfather’ Billy Flynn and take a 2-1 advantage.

Asylum relished the series of matches he wrestled with Singh and considers him to be a smooth performer inside the squared-circle. “He’s good to work with,” he said. “He’s very open-minded, which I like, because that’s how I am in the ring. I’m not really against anything; he’ll let me do whatever I want and I’ll let him do whatever he wants, within reason you know … other people have had negative things to say about Vijay and that’s fine with me. I’ve never had a problem with him and I like working with him. I’d work with him anytime.”

Asylum learned the craft of wrestling alongside Gail Kim at Ron Hutchison’s Pro Wrestling Gym, going move-for-move with the current WWE commodity, who he recalled as having “a really stiff dropkick.” He furthermore wrestled on many of the same AWF promotions that she did. He’s elated by her success. “She deserves everything she’s got so far. She’s a great worker and she’s found it very nice. I actually saw her a few months ago, just before I left to [go overseas]. She’s still the same, you know, she hasn’t developed an ego or anything, or thinks she’s better than anyone else. She’s still the same, very friendly to me, just as if we were training again. That’s really good to see, I like things like that.”

During his AWF stint, Asylum was also managed by the sensational (no pun intended) impressionist, Jason Sensation, who gained famed across the world for his impressions of the late Owen Hart among other WWE superstars on Monday Night RAW programmes circa 1998-1999. “He’s great. He’s hilarious in the back,” revealed Asylum. “He’s always got something to say or something funny to do. He’s helped me a lot.” When pressed about whether Sensation has an impression of him, Asylum stated: “He kinda stays away from us workers. I’m not sure why. Maybe he thinks I’ll beat him up or something (laughs).”

The problem Asylum faces now on return is that the AWF, like many other Ontario-based promotions, has fallen victim to the mounting insurances woes in the Province and hasn’t run a show since the aforementioned ‘Risky Business’. With the exception of an appearance in the Montreal-based NCW, the grappler who is planning to become a high school music teacher in the future, has wrestled exclusively for AWF while competing in Canada and so he may need to start exploring other options.

He plans to spend the next couple weeks scoping out the Ontario wrestling circuit and seeing what work is available, talking with Ron Hutchinson to see what the future holds for the AWF, and discussing the possibilities of training at the highly-publicised Squared-Circle Gym with head-trainer, Rob Fuego.

After tasting success in the AWF and most recently down under, expect a more focused and determined Asylum than ever. The Ontario wrestling community beckons.