The upcoming ECW One Night Stand pay-per-view isn’t the only opportunity for fans of the promotion to get their hardcore fix. TNA Wrestling has plenty of former ECW stars on its roster, and many of them will be on hand when the company presents a house show at the famed ECW arena in Philadelphia on June 9th, two days before the WWE’s offering.

SLAM! Wrestling recently sat down with former ECW World Champion, and current TNA road agent, Jerry Lynn, to get his thoughts about the house show and the ECW revival in general. 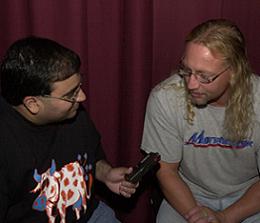 “I’m really excited about going back to Philadelphia,” Lynn said. “Of course, that’s the old home of ECW, and we have a good fan base there. Also, because it will be a good feeler to see how a TNA house show will do there.”

Lynn is especially anxious to be part of what could be a spoiler of sorts for the WWE’s plan for an ECW relaunch. The TNA show will include many of the stars that, to fans, are synonymous with ECW, such as Raven, Rhino, Simon Diamond, and Brother Runt aka Spike Dudley, all of whom have been advertised to appear (other former ECW stars in TNA include Shane Douglas and The Dudley Boys/Team 3-D, who are speculated to be the surprise opponents of America’s Most Wanted, though nothing has been formally announced).

To feature those stars, in that building, on a day so close to the WWE’s event hardly seems coincidental. Rather, it appears to be a deliberate tactic to try to poach some of the WWE’s potential audience. Lynn thinks this counter-programming tactic — which was also done in March when TNA ran a Detroit show two days before WWE’s Saturday Night Main Event return –- is a good idea.

“It’s nice to give Vince (McMahon) a taste of his own medicine for a change,” he grinned. “He pulls the same type of thing all the time.”

Besides, it’s not as if McMahon will be presenting an authentic ECW show anyway, according to Lynn.

“Once again, (WWE is) screwing it up. Look at the first two matches they’ve announced –- they have WWE guys in them. So it’s not really an ECW pay-per-view. If they give Paul (Heyman) and Tommy (Dreamer) control, then (the ECW revival) can be a successful venture. But if they’re going to keep sticking their nose in it, I don’t think it will work. ECW fans will see right through it.”

Even if WWE could make it work, they would have to do it without Lynn’s involvement. Though he was with the company at one time, he’s not interested in leaving TNA at any time soon and going back.

“If I wasn’t on contract, or if TNA didn’t exist, and WWE called me, then they would first have to cough up all the money that ECW screwed me out of when they went bankrupt. I don’t know if they would be willing to cough that up or not.”

But even that is only hypothetical, as Lynn is clear that TNA has earned his allegiance. “When I needed shoulder surgery,” he explained, “TNA gave me a road agent position, so I’m loyal to them.”

Working for TNA also gives Lynn the chance to compete with some of wrestling’s future legends, particularly those in the X-Division. At the June 9th show, for example, he will be facing Team Canada’s Petey Williams, a competitor that he really enjoys working with.

“Petey’s one of the younger guys who has progressed so much. There are so many in the X-Division -– Chris Sabin, Alex Shelley, Roderick Strong, PUMA. The X-Division has always been a very big part of TNA, and helped give the company a lot of exposure.”

Beyond his match with Petey, there’s one other that Lynn is looking forward to: the three-way between Samoa Joe, Christopher Daniels, and AJ Styles. Though none of them were ECW names, he feels that they will nonetheless thrill the crowd.

“The three-way is going to be amazing. There will be a lot of great matches there for the ECW fans, and the TNA fans. I’m really looking forward to the night.”