From his Manhattan apartment, Hackett has spent the past 20 years writing for publications that occupy space on coffee tables and in waiting rooms around the country – Rolling Stone, The New Yorker, GQ, and The New York Times have all borne his byline.

Little did he know that over three years, he’d be working on a book about professional wrestling, a topic Hackett considered (and in some respects, still considers) cult-like and childish. 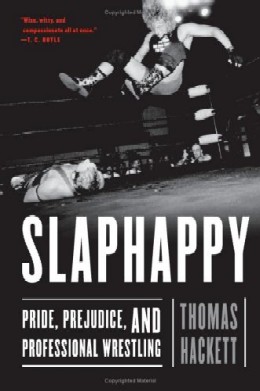 “When it was suggested to me, the first thing I said was, ‘I’m not a fan,'” Hackett says. “But I realized that the more you watch it, the more fascinated you end up.”

Slaphappy: Pride, Prejudice and Professional Wrestling, published by Harper Collins, hit bookstores in March, but became Hackett’s life back in 1999 when he began attending live events, both professional and small-time, going on bus trips and talking to as many fans as he could.

The book, a look at the story behind the spectacle, also features interviews with some of the best known names in wrestling including Roddy Piper, Dwayne “The Rock” Johnson and Bret Hart. But it’s Hackett’s conversations with some amateurs and fans that will intrigue (or disgust) even the most unfamiliar reader.

“My wife, she’s pretty immature,” Hackett quotes one nameless fan as saying. “She got mad and what she did is, she took it out on my action figures.”

The point of these stories isn’t to humiliate fans though, Hackett says, but to illustrate the devotion to the culture to someone who doesn’t regularly tune into RAW or Smackdown! or attend live events. In fact, he says, he assumes most hardcore fans won’t even pick up Slaphappy.

“That was something I struggled with. I realized that my ideal audience or reader would be someone who was pretty well read and interested in culture, but not a snob. Someone that watches but isn’t an over the top fan,” Hackett says. “I met a fair number of fans that fit into that category. It would be those boys I talked to on the bus trip, who in 10 years will age out of wrestling and ask themselves, ‘What was that all about?'”

Throughout Slaphappy, Hackett said he worked to remain ambivalent in his judgment of wrestling, but he grew to enjoy the ruckus surrounding smaller, local matches. He held the louder and more violent contests close to his heart because of the fan interaction.

At one point in the book, Hackett interviews former Combat Zone Wrestling star Matt “Wifebeater” Prince about his compulsion to self-mutilate with weed whackers, glass and thumbtacks during matches. Presented as one of the more insightful competitors mentioned in the book, Prince impressed Hackett with his honesty and candid observations about the industry.

“He’s very soft-spoken and shy and very reflective. I feel really lucky to have met him. He helped me understand things,” Hackett says.

Prince was one of the few wrestlers interviewed for the book that Hackett said seemed to “get it.”

“It’s all about not being a little bitch,” Prince tells him.

By his own logic, wrestling requires that an athlete go to desperate lengths to prove their manliness, which for many wrestlers includes becoming vanity-obsessed and almost feminine in their character portrayals.

“The entire thing is a homoerotic ritual,” he says. “Essentially, it’s one ritual male rape after another. It’s affection disguised as aggression, and that’s just what it is — a disguise.”

The idea that wrestling is vaguely homosexual isn’t news to fans, but it’s usually blown off and not given a second thought. After all, attend any WWE event, and you’re likely to see a bikini match, lingerie contest or pillow fight between two well-endowed Divas being cheered on by the crowd.

But at the events he attended, Hackett said the crowd cheering for the women was much quieter than that egging on the men.

“The women are a beard,” Hackett says. “It’s kind of like a gay guy taking a girl to a party — it’s to look straight. The women are there to make it seem like it’s very straight. I don’t want to say wrestlers or fans are gay. The fans I met were very insecure about their manliness. With wrestling, they’re able to assert their homoerotic interest and deny it at the same time.”

But for all its implications about fans and participants, Slaphappy gives the average reader a look inside the sport that they may not have otherwise gained. On Amazon.com, the book has received a multitude of favorable reviews from readers who viewed it not just as a book about wrestling, but an outsider’s view of sports entertainment in terms of its relevance to pop culture.

Sure, sprinkled amongst the pages, you’ll discover no shortage of obsessed fans, arrogant superstars (“I dealt with a lot of egos,” Hackett says), and sweeping generalizations about the pastime, but there also a few good messages.

“It’s a healthy thing,” he says. “But I talked to some people where it was just, I mean, it was sad. You’re talking to these guys who are completely clueless. These young guys who are telling you their win-loss record like it means something, who think they’re fighting real matches. That’s sad.”

While he says he hasn’t received much feedback on Slaphappy yet, Hackett says he isn’t worried about the reception he’ll get from wrestling fans. After all, he says to me as we wrap up our conversation at midnight, if they can accept that wrestling isn’t real and still remain fans, they can handle a little criticism for the sake of their ‘sport.’

“One of the nice things about wrestling is that you’re able to express yourself. Fans can go and yell at a wrestler and call them a name, and that’s just the way it goes,” he says. “They’ll be okay with it. It’s people like that, who go and say what they want to, that gave me a deeper appreciation for this whole thing.”

AMY LAWSON is a 21-year-old journalist in Connecticut. When she’s not interviewing people, she’s reading, watching movies or traveling to keep herself busy. She’s been writing professionally since age 17, but is a criminal justice major at college. Contact her at [email protected].