‘One-Ring Circus’ gets the hook

Sometimes, we find that one opinion just isn’t enough at SlamWrestling.net. So in that spirit, Jason Clevett and Greg Oliver each offer their thoughts on the new book, Wrestling’s One-Ring Circus: The Death of the World Wrestling Federation by Scott Keith. 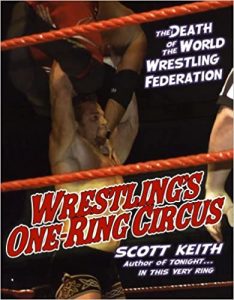 Fans of Scott Keith will probably enjoy his newest book, Wrestling’s One-Ring Circus: The Death of the World Wrestling Federation. Those who aren’t regular readers will probably end up at the exact opposite of the spectrum.

The book compares Vince McMahon to circus and promotional master P.T. Barnum and covers what Keith believes to be the period of time when the WWE plummeted from its success of the late ’90s: The end of 2001 to Wrestlemania XIX in 2003. Covering topics from the botched “Invasion” angle to HHH and Shawn Michaels backstage politics, Keith doesn’t say much that hardcore internet fans don’t know, but it may intrigue those who aren’t as familiar.

The book bounces around far too much in a stream of consciousness style with some of Keith’s match “rants” interspersed. Keith randomly touches on topics before moving on at breakneck speed and then bounces back to the earlier topics. Keith saves a great deal of venom for Triple-H and Michaels and their political maneuverings, but one can’t really argue with much of what he says on the topic.

In classic Keith style he touches on a myriad of topics including the gay wedding, brand extension, NWO, the battle with the World Wildlife Fund, Brock Lesnar and much more. There are moments of humor while the book rushes through the topics, but not a great deal of substance.

In the long run, there won’t be much that is memorable about Wrestling’s One-Ring Circus: The Death of the World Wrestling Federation. Some might use it to reference back to the time period, and the book is accurate. However compared to the plethora of wrestling books that have hit the market in recent years, there are plenty of books that will give far more insight and depth to professional wrestling than Keith’s work.

While reading Scott Keith’s third book, Wrestling’s One-Ring Circus: The Death of the World Wrestling Federation, I came away with more questions than answers.

But yet upon self-reflection, I find that Keith and I share a number of things. We’re both Canadian writers, we both question the push of Michaels and “on with the show” mentality after Owen Hart’s death, and we both are tired of the current WWE product. But there it differs. I gave up on their shows a long time ago. He is obviously a masochist, enjoying the pain and suffering brought on by TV writers plotting bad sports entertainment.

So, dear reader, if you see yourself in any of the above questions, Keith’s Wrestling’s One-Ring Circus: The Death of the World Wrestling Federation may have some answers for you.