LAS VEGAS – He was “The Showstopper,” “The Heartbreak Kid” and “Mr. WrestleMania,” but on Wednesday night at the Cauliflower Alley Club reunion, Shawn Michaels was a humble man, appreciative of the gifts he has been given, including the Lou Thesz/Art Abrams Lifetime Achievement, and the people who helped him achieve his boyhood dreams in professional wrestling. 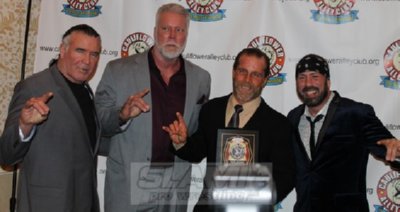 Scott Hall, Kevin Bash, Shawn Michaels and Sean Waltman at the end of the evening. Photos by Greg Oliver

Slipping his suit jacket back on as he ascended the stairs to the podium at the Gold Coast Hotel & Casino in Las Vegas, Michaels, now “Mr. CAC,” was ready to make people laugh, to share some stories, and to head out in a reasonable amount of time, as the final presentation of a great night of awards.

But before he could speak, the evening’s emcee, Jim Ross, got to say his part, calling it “the main event portion in my eyes,” and that he was “envious” of Michaels’ peace now, and that was not always the case.

A “Hey yo” started it off from Hall in his Razon Ramon persona, and he launched into a tale about meeting Michaels in the old Central States territory, and how, even as a rookie, there was a reputation for him already as someone who could perform. Up next was Waltman, who said that “just being in the ring with you I was 10 times better a performer.” The 1-2-3 Kid turned X-Pac then thanked Michaels for getting hurt so Waltman could join D-X and “make a lot of money.”

Nash said that he did some research on the CAC and former president Lou Thesz, and was surprised that it was Thesz that invented the power bomb. “Without Lou Thesz I would have had four moves,” cracked the big man. Nash made the jump from WCW to WWF to be Michaels’ bodyguard, Diesel, 28 years ago, even though he didn’t know Michaels at all. Nash said that he learned to be a better performer just by being at ringside for Michaels’ matches.

“It was a rough life, and we did what we had to do to survive,” admitted Nash, confessing that that often made them seem like assholes. But in the end, after his injuries, retirement, and faith, “Shawn has found peace … but it was always there, because it was in the ring every night.”

Michaels, his trademark long ponytail gone weeks back, thanked the CAC, running its 53rd annual reunion, as “an organization steeped in tradition” that even let the likes of them there. He promised to “do our best not to screw it up so we can get invited back.”

Looking around the room filled with legends, some of whom had been honoured earlier in the evening, Michaels said that he was not sure he had “all the old-school mantra stuff you’re supposed to have.”

One oldtimer caught his attention, and not just because of his light pink sportscoat.

Michaels blamed Pat Patterson for a lot of the behaviour of the Kliq, “we’re all bad because he’s bad,” and told the audience that Patterson was mocking many of the honourees at their table.

Like a well-timed shot of Sweet Chin Music, though, Michaels turned the tables, and began praising Patterson as the key man in his career. After arriving in the WWF with Marty Jannetty, the Rockers were fired a little over a week in. For a year and a half, Patterson lobbied Vince McMahon to give them another shot.

Michaels said that Patterson, who wrote a lot of the WWF/WWE scripts, especially the finishes, had a “huge influence on all of us.”

“I don’t get up here without you,” said Michaels, revealing that he wanted to say that at his WWE Hall of Fame induction speech too.

Looking once again around the room, Michaels marveled at seeing old friends, and heroes, like Scott Casey, who was involved in an unforgettable angle for a 15-year-old Michael Hickenbottom in the San Antonio territory, almost losing his hair in a hair-versus-hair match with Eddie Mansfield.

The room was comprised of “relationships with people you run into along the way,” said Michaels, about to go for the 1-2-3 in a business “filled with backstabbing bitter old sons of bitches.”

“I wouldn’t have it any other way.”

“Good Ol’ J.R.” Jim Ross and some of the other WWE crew were attendance despite 36 hours of airflight from Saudi Arabia, where they were a part of WWE’s big event there. Ross said that in all that time, he only spent a single night in a hotel. “I flew that far and I worked an hour,” he said. Ross ribbed many in the audience, including favourite target Pat Patterson (“It’s not too late to change teams”) or thanking Tony Garea for making sure no one ever got mugged in WWE catering.

The evening sped along at a decent page, clocking in at a little more than two hours for the presentations themselves.

Presenter Joyce Paustian addressed how the Iron Mike Mazurki Award winner, Baron Von Raschke, is still instantly recognizable, part of the requirement for the industry’s top award (even if he is often mistaken for George Clooney).

Von Raschke then goosestepped to the podium, knocking over a chair in the process, and growled into the microphone. But he was himself, not in character, as he first thanked “Mrs. Claw” Bonnie, his wife of 51 years (“five of them happy”).

The Baron then detailed getting out of the U.S. Army and eventually into pro wrestling, training under Verne Gagne. That initial mould made under Gagne benefited from the vision of Mad Dog Vachon, who thought he’d make a great German (“I am German!”).

Like building a great match, Jim Raschke morphed into the Baron, his voice rising with passion as he recalled the early days.

Naturally, his ending was already written — “And da is all you need to know!”

The third-ever CAC Tag Team Award went to Harlem Heat, Stevie Ray and Booker T. Wrestler Scott Casey introduced them, as he trained the Huffman brothers in Houston, Texas, at Ivan Putski’s wrestling school. “Every time I showed them something, they did it perfectly,” he recalled, downplaying his “week” teaching them.

“I guess I’ll start because I was the one always taking the bumps,” cracked Booker T. “I wouldn’t be here if it wasn’t for my brother. … Wrestling has been my brother’s dream since we were little, bitty boys.” The boys had a pretend wrestler, Mr. Ebony, to look up to too — and Booker said he still has the belt they made for him.

“So many guys were so instrumental in our careers,” said Booker T, recognizing Ricky Santana and Cuban Assassin in the room — “we beat those guys so many times,” and many others like Skandor Akbar, Johnny Mantell, and Eddie Gilbert.

“I would not be who I am today if it were not for professional wrestling,” ended Booker, turning it over to his brother, with, “I love you, and I thank you.”

Stevie Ray talked about the “intangibles” that are key to pro wrestling, little things that help built up professional wrestling. “It was about the show,” said Stevie Ray, not about what they might have wanted to do. (He did admit that Booker took far more of the bumps for the team.)

“To have a family member walking side by side with you through the annals of this game, I’ll take that any day,” Stevie Ray concluded.

After being introduced by his friend Craig Massey, Men’s Wrestling honouree Greg “The Hammer” Valentine made his way to the podium and held the award high, reminiscing back to his first CAC in 2001 shortly after his father, Johnny Valentine, had died.

He talked about getting into the wrestling business, how his father probably didn’t want him to be a wrestler, since he sent him north to Calgary, to learn from Stu Hart.

“My career is 47 years long — I just counted it out. I broke in, in 1970,” said Valentine, who now calls Las Vegas home. “The only reason I can still walk is because I fought back.” Except Andre the Giant, who would sit on The Hammer and fart on him.

He jumped through his career, from partying with Ric Flair, to hour-long matches with the Anderson brothers or Bob Backlund. “This is one tough friggin’ business to be in,” Valentine concluded. 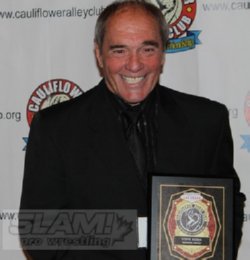 CAC President Brian Blair introduced his friend Steve “Speedo” Keirn, the recepient of the CAC’s Trainer Award. Not only did they wrestle together, they were business partners in a Florida gym. According to Blair, Keirn has trained more people in the business than anyone else.

“Who said they were getting out of here by nine o’clock?” warned Keirn to begin his speech. “I’m kind of the Kevin Bacon of wrestling” because if you hadn’t wrestled with him, been in a dressing room with him, or trained with him, then you probably weren’t in pro wrestling.

Retired three years ago from training, Keirn raised the need for “passion” for the business, and detailed his own training under Hiro Matsuda — “he smiled the whole time he hurt you.” It also established a need for kayfabe. “I learned a long time ago to protect my business.”

“Teaching is a totally different animal because you have to retire your mind and go back to when you started,” he said, listing basics, like wiping your feet on the mat before getting into the ring.

“This industry has evolved,” Keirn said, comparing wrestling’s growth to action movies of the 1960s where there’s a death or two, and now where there’s hundreds killed on screen. “I’ve seen some unbelievable changes.”

“I can’t stand up here and claim anybody” that he trained, crediting Dusty Rhodes, Tom Prichard, Norman Smiley and others for helping the skillset of students. “I totally feel like [the award is] not all mine.” 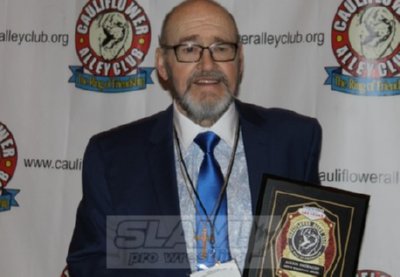 Michel Lamarche, Men’s Wrestling honouree, was better known as Michel “Justice” Dubois and Russian Alexis Smirnoff. “I am proud to be a Canadian,” he said, but picked the name Smirnoff from a vodka ad he saw in a magazine while on a plane. It was a tough road, a tiring one, he said. “You were crying because you’re away from your family, but it’s a business and you cannot forget it.” His two daughters and son were there, and his wife of 41 years — “she’s the one that really supported me, or I wouldn’t be here.”

The Women’s Wrestling honouree was Santana Garrett, who has been everywhere from TNA to NXT to Japan. “TNT” Keny G, who introduced his daughter, talked about his own time in the ring as a wrestler and a promoter, explaining the business to her, but always trying to be home to make pancakes for his three girls and five boys. 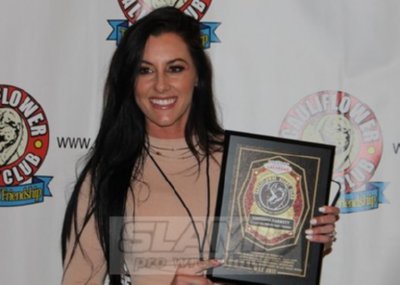 Santana recalled kindergarten and telling the teacher, “when I grow up I want to be a professional wrestler just like my dad.”

Many people tried to talk her out of it, but “I loved it way too much.” She also addressed naysayers, including those who said her teeth weren’t straight enough or that she was “too fat for TV.” Garrett admitted that “there are moments that I felt alone and defeated” but that the reward of a career in pro wrestling made it all worthwhile. 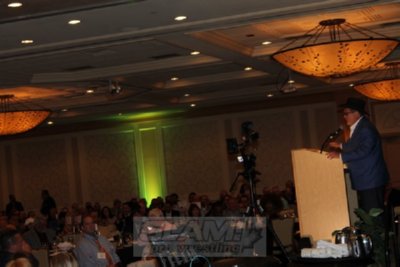 Jim Ross speaks to the crowd.

Emcee Ross had tidbits on many of the honourees, like how Lamarche/Dubois/Smirnoff loved his vodka, what Keirn was like as a trainer when Ross ran WWE’s talent relations department, and skin care products with Valentine.

The rest of the annual banquet had a raffle for a title belt, an auction for a unique blanket made of WWE t-shirts, and the winners of the bowling and cribbage tournaments.