For Brickhouse Brown, a night of courage and emotion

LAS VEGAS — It’s not often that a newcomer steals the main event at the annual Cauliflower Alley Club reunion.

But battling terminal cancer and shedding tears, Brickhouse Brown did just that as he accepted the club’s first-ever Courage Award at its deli-style Bockwinkel Blowout May 1.

“I can honestly say if it wasn’t for the CAC coming to my aid, I would not be here looking at all you beautiful faces,” Brown said. “This is one of the best moments I ever had with the exception of the birth of my children.” 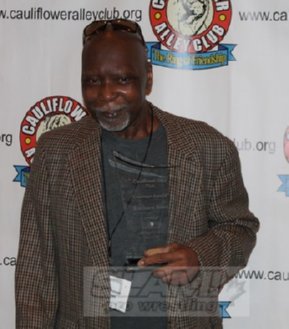 A top heel during the 1980s and 1990s, Brown has been diagnosed with stage 4 prostate cancer. He said doctors have told him the disease has spread to his brain and given him six months to live. Treatments have taken the hulking star from 250 pounds to 150 and impaired his eyesight, Brown told a packed house at the Gold Coast Hotel and Casino.

“I have no way to express the words and what they say about the fighting spirit you have,” CAC president and CEO Brian Blair told him in presenting the Courage Award.

During a speech packed with emotion and laughter, Brown said he appreciated his two-decade runs, highlighted by top billing in Tennessee and Florida, and the chance to make good money.

That is, until he was tardy for Mid-South promoter Bill Watts, who repeatedly fined him for showing up late to shows. As Brown quoted Watts: “Brick, I like paying you because you give it all back.”

Brown said he didn’t know about CAC until its representatives stepped in through the club’s Benevolent Fund and helped him ward off eviction from his home. The group has helped with moral support, while wrestling communities in the South have held fundraisers to offset his medical expenses.

“I never knew I had such an impact on so many people, much less the boys,” he said.

Brown also commended Terry Funk, who helped him get in the business and calls him biweekly to check on his condition. Sidelined by a hernia, Funk couldn’t be at this year’s CAC reunion, so Brown called him on his cell phone and placed it next to the house microphone.

“Tell ’em how great I was and how I was one of the best students that you ever had and that I went way past your expectations,” Brown told Funk, with the audience howling at his ploy.

“I wish I could be at your side,” Funk responded.

Brown held several singles and tag titles, a far cry from when he lied about his experience when breaking in for San Antonio, Texas, promoter Joe Blanchard.

“I never had a wrestling match in my life,” Brown said of his maiden contest with “Hangman” Bobby Jaggers. “I had no idea what I was doing.”

Brown said he is at peace with his life and has tried to patch up differences he had in his career by calling old colleagues, though he said he jokes “if I owe you any money, I can’t give it back to you.”

The club also presented several other awards during the blowout, named for former CAC President Nick Bockwinkel, who died in 2015.

– The Posthumous Wrestling Award went to Canadian Roy McClarty, a two-time world tag team champion in the Chicago territory during the 1950s. “The squared circle truly was his comfort zone,” said his youngest daughter Kelly McClarty. “He was an amazing human, father, and wrestler.”

– Kevin “Killer” Kross won the Rising Star Award. The “Tollman” starred in Global Force Wrestling, Lucha Underground, and other promotions after shifting to wrestling from combat sports. “I was in love with the spectacle,” the New York-born Cross said.

– Princess Victoria, whose career ended after a broken neck 32 years years ago, received the Women’s Wrestling Award. She held a share of the WWF Women’s world tag team title in 1984. “I made enough memories in that short period of time to last a lifetime,” said Victoria, aka Vickie Otis.

– Tony Storm captured the Men’s Wrestling Award based on his experience on the independent circuit since his debut in 2010. The Iowa native was working as a gym manager in Florida when he came under the tutelage of trainer Steve Keirn and redirected his life. He said he hopes people will someday say, “Tony gave everything he had to professional wrestling.”

– Don Luce of Batavia, New York, is one of the sport’s premier historians. His lifetime of work pouring over microfilm, identifying match results and forgotten wrestlers, earned him the James C. Melby Historian Award. “You see so much BS by these promoters and finding what the truth was is really interesting.”

– The Charlie Smith Referee Award went to former WCW and WWE official Mickey Jay, formally Mickie Jay Henson. He’s had his share of health scares as well, and battled back to become the fourth recipient of the award.

– Blue Demon Jr. was the winner of the inaugural Lucha Libre Award. The Mexican-born star noted that he is the adopted son of the legendary Blue Demon. “I don’t have Blue Demon’s blood in my veins, but his soul rests in my heart,” he said.