Abdullah forks up the WAW

MONTREAL – Saturday evening was the first show for the World All Stars Wrestling and its promoter/wrestler Andy Ellison in quite a while. For the occasion nothing could be better than Montreal’s most famous nemesis for the last 44 years in the grand finale, Abdullah The Butcher.

The WAW was founded in 1993 as a way to raise money for different charities and entertain fans at the same time. Andy Ellison, its creator/organizer and main eventer has been wrestling for 15 years and has major plans to have shows every two months in the coming year.

Saturday’s show, appropriately called ‘Brawl at the Mall’ was the first independent wrestling event of its calibre to hold a show in a shopping mall. A pleiad of well know Montrealers were in attendance as fans such as NHL Hall of Famer Dick Irvin, former world champion boxer Otis Grant, CJAD am radio personality Egbert Gaye amongst others.

The show began on time with a demonstration of Kung Fu and Ku-Jutsu from the Kudoki Martial Arts school and their mentor Sifu Max Laredo. The demonstration was appreciated, although a few fans found it to be a little lengthy. 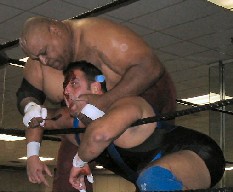 Abdullah The Butcher proves he can still use his fork against Andy Ellison. Photo by Richard Leroux

That was followed with Gorgeous Mike accompanied by his valet Minoushka, a sort of Amazon Russian woman, up against the crowd favourite Nova Cain. This match featured many power moves by both wrestlers, and the inevitable interruptions by Minoushka who was irritated by the crowd’s chant for their hero. After less than 10 minutes, Gorgeous Mike scored a pin and remained the ‘Quebec Heavyweight champion.’

The next match had Bobby Thompson against Frank the Tank with his manager Tolo. Although Tolo interfered numerous times, Thompson pinned Frank in a very short match. Thompson imitated many moves from the big leaguers such as Rikishi’s, The Rock and many more.

The first tag team match of the evening had veteran Quebec wrestler Chakal with Bishop squaring off against Diablo and Jay Phenomenon, also know as Fresh Factor. With non stop action and great moves by both teams, the four grapplers managed to keep the crowd on the edge of their seat and by using well executed power moves and a few high flying manoeuvres, Fresh Factor came out the winner to the delight of the crowd.

After a very brief intermission in which many presents were thrown into the crowd, it was time for the second tag team match of the evening pitting Enigma and Chris Stevens against Red Hot Jimmy and Cobra in the middleweight class. The teams delivered a great technical showdown with the usual comical comments from the inimitable Chris Stevens. The crowd really responded with chants throughout the match, especially when Red Hot Jimmy and Cobra won. Enigma took his dazed partner backstage on his shoulder.

As a special attraction, the 600 plus in attendance stood up to welcome the return to Montreal of former WWF tag team champion Jim ‘The Anvil’ Neidhart, who was facing another name from the WWF’s past, Max Moon. Although Neidhart is no longer a common name in the wrestling ranks, he still demonstrated why he was such a force and defeated Max Moon with relative ease using his usual tricks and wicked laughter. After about 10 minutes, he walked out with the win, to the absolute delight of the crowd.

The main event featured Ellison up against what he calls the source of many nightmares in his youth, the Sudanese madman himself, Abdullah the Butcher.

“I’ve been around for over 44 years you know, I’ve beaten all the Quebec wrestlers that dared wrestled against me,” Abby told SLAM! Wrestling.

The Butcher still has that ferocious aura that surrounds him. The crowd was in awe, as Abby slowly made his way to the ring, accompanied by his famed manager DeePak, as were the kids in attendance who had never seen this legend live and had only been told of his feats by their fathers who came to the show with them.

The battle started even before the bell rang, as Abdullah attacked Ellison, and threw him on the announcer’s table before smashing a steel chair on his head. That’s all it took to get the blood flowing from Ellison’s head and everyone knows by now that when Abdullah sees blood, out comes his beloved fork to make sure it doesn’t stop flowing. Abdullah even broke a bottle of beer so he could use it to further the damage, which was already quite severe, on Ellison’s head.

Even with the entrance of all the other wrestlers involved with the show to separate the two bloodied grapplers, Abdullah went about his business to head butt almost all the wrestlers in the ring. It was at this point that both wrestlers took the fight outside and continued very slowly towards the dressing room. Abdullah paused to toss Ellison on another table, then lumbered to the dressing room. At that point Ellison took the mike and invited Abdullah to come out to continue settling their differences, and Abdullah was only happy to oblige. At the end, the match stopped just outside the dressing room to the astonishment of the crowd who just couldn’t believe what they had just witnessed. This match had shades of a match between Dino Bravo and Abdullah in Tokyo in the early ’80s when they were both bloodied and continued outside to a double count out.

Even though Abdullah may have seen his better days, he still caused complete chaos and made the evening memorable for all the fans, young and old as well as the emergency staff Red Cross members standing by. The buzz after the end of the card was concerning the bloodiest match in Quebec since … well, Abdullah’s last presence. Will Montreal ever witness such a bloodbath again?

Probably not, unless Abdullah decides to continue and finish his battle with Andy Ellison.