The latest offering from the WWE’s publishing wing is Adam Copeland on Edge, an autobiography of a self-made man in many ways. It’s a good, easy read, but in the end, it’s just not going to stand the test of time. 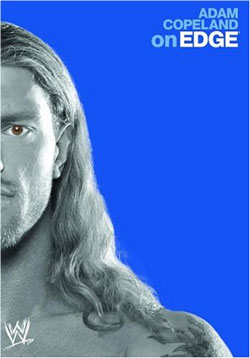 Forced to the sidelines for a year to recuperate from neck surgery, Copeland tried his hand at penning a column for the WWE website, which ultimately led to this book. It’s all his writing too, ala Mick Foley (who wrote the foreword), which is a nice change from the standard reliance on co-authors.

One can tell that he is having fun spelling out his life. The book is full of amusing anecdotes (the pig and Tony Condello is a priceless story), and self-deprecating humor: “I’ve been hit so many times with steel chairs that the top of my head now officially smells like ass.”

It takes a while to get used to the constant use of brackets, in-jokes and asides (something a co-author would have reined in), but then again, no one would ever accuse the WWE line of books as being high-quality literature. Some of the match descriptions go on too long, and recount storylines ad nauseam as well. And while the book weighs in at 254 pages, a good third of it are photos – some reeking of awesomeness, some swimming in suckitude.

Written so early into his career – he’s only 31 – it totally lacks in depth and perspective the way that an autobiography by Ric Flair or Harley Race does. Because he’s still active and in the main event mix on RAW, he also doesn’t take any shots at anybody. That’s not to say that he kisses ass, he just doesn’t slag people besides his designated whipping dog The Coach, Jonathon Coachman.

Short of the revelation of a rape allegation that never went to court, he avoids sensitive topics, including skirting around his divorce. Nowhere are pain-killers and other recreational drugs explored. Yet the fan at home assumes that wrestlers today are using something to survive their hectic schedules. After all, Edge, along with Christian and the Hardy Boyz and the Dudleys elevated the art of high spot to incredible degrees (and Jeff Hardy ultimately became a shell of his former self). There was a price they paid.His self-analysis over his many injuries is probably the most interesting part of the book. One comes away with a little better appreciation for what these men (and women) do for a living, and the price that is paid. Having one’s dreams derailed by a broken bone at a crucial time in a push is not something your average ham-and-egger ever has to deal with.

From a personal perspective, Copeland’s recollections of growing up and loving Maple Leaf Wrestling bring back lots of memories for this reviewer-though, Adam, Billy Red Lyons is still very much with us. His stories of the southern Ontario indy scene and mainstays like Sweet Daddy Siki, Joe E. Legend, Sean Morley, Zakk Wylde and Sinn are great fun, and I wanted more – where were the Bill Skullion stories? Ricky Johnson? (I still have my notes from the first time I saw Copeland perform as Sexton Hardcastle at a west end Toronto bar for Johnson. “Could be good if ceiling was higher.”)

Adam Copeland on Edge is a book written at a specific period in time, capturing his enjoyment and frustrations of life as a wrestler. Like most wrestlers, it won’t age gracefully, with its dated references and inside humor reflective of its time.

But like his career, which has WWE champion penciled in somewhere down the line, this is just another step for Copeland. Perhaps in another 15 years, there will be a tell-all where he lets himself go. For now, Adam Copeland on Edge will have to suffice.