Johnny Ova trying to get over

The wrestling business is dominated by big men — true or false? While many consider the aforementioned statement to be true, some of the smaller men tend to be the bigger stars. Johnny Ova, a Long Island-based independent wrestler had to overcome his size to claim his spot in this sport. Since his early days, Johnny has improved immensely and is rapidly becoming one of the more popular wrestlers on the indy scene.

Growing up, the 6-foot, 195-pound Johnny was a huge wrestling fan. “I liked Shawn Michaels, Bad News Brown, Ludvig Borga, Ted Dibiase,” Ova said. “Wrestling was my way of escaping.” Wrestling helped to take the weight of the world off of Ova’s shoulders. Sitting in front of the television with his father helped Ova to forget the problems of everyday life and to enjoy the moment. 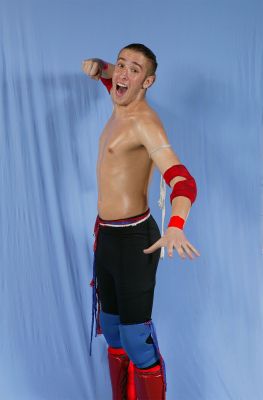 Over the years it has been proven that one match can change a person’s life. For Mick Foley it was Snuka vs Muraco, for others it was Ricky Steamboat vs Randy Savage, for Johnny Ova it was Ted Dibiase vs “Macho Man” Randy Savage. Their clash at WWF Wrestlemania IV influenced and affected a young Johnny Ova very heavily. Ova was also impacted later on, when at Wrestlemania XII, Shawn Michaels took on Bret Hart in an Ironman Match. “It was more than just wrestling, it was the emotion,” Ova stated.

CMPW became the place where Ova would begin his training to become a professional wrestler. “In the summer they would turn the heaters on and we ran.” From there, Ova progressed and began training under indy worker, Xavier, until he met his current manager and agent, Bobby Reidel. Riedel saw the potential that Johnny posessed and immediately started to hook him up with further training from the likes of Ted DiBiase, Ricky Steamboat, Road Warrior Hawk, George Steele, Marty Jannetty, Terry Taylor, and personal sit down meetings with Shawn Michaels. “He (Bobby) is sculpting me and teaching me the ways of the business,” said Ova.

Working around the globe, wrestling changes. There are different cultures, styles and types. Since Ted Dibiase found his faith, he has been running PWA Shows — Christian wrestling without raunchy storylines or sex-related angles, wholesome, family fun. “It’s incredible,” Ova told SLAM! Wrestling when asked about PWA. “It’s like heaven.” PWA has played host to many legends, including “The Heartbreak Kid” Shawn Michaels and Sting. Ova is ecstatic to be a part of the promotion as not only a worker, but a minister in sharing his faith.

In 2001, a young Johnny Ova was beginning to show signs of an emergence. Wrestling for such promotions such as USAPW out in the Long Island, NY area, Ova seemed to be struggling. He had the ability and talent, but was an unsung hero. “Working my way up the card has been great,” Ova said. “The people who doubted me … motivated me to work my way up, and that’s great.” Some of the highlights of Ova’s career include working with Ted Dibiase and one on one time with Shawn Michaels. “Just working with the guys I grew up watching on TV has been something that I never thought would happen. I have learned so much from all the parties involved. It’s invaluable,” Ova said.

DiBiase is a fan. “Johnny Ova is truly a rising star in wrestling. His work ethic is awesome. Outside of needing to gain some size physically, I think John has the potential to go far in the business,” The Million Dollar Man’s testimony reads on www.johnnyova.com. “He has charisma. No matter how physically gifted you may be, without charisma in wrestling your going nowhere. Johnny has the goods to go as far as he pushes himself to go. On top of all that he is simply a great guy and I consider him a true friend.”

Working his way up, Johnny Ova worked with a lot of today’s top indy stars. His favorite? “No doubt, Dan Barry,” Ova quickly replied. A former tag team partner of Ova’s, Barry would work with Ova day in and day out. Sometimes together, sometimes apart, but always solid. Graduating a month apart and quickly becoming best friends, Ova and Barry were always close. Learning from each other, the two were able to climb the ranks and prosper. “We were just wrestling students getting rave reviews for our matches,.” Ova said. Ova recalled his favorite match with Barry as being a singles match the two had in Deer Park, NY. Ova was also proud of the Three-Way Ladder Match he and Barry had, along with The Grim Reefer. “I also enjoyed working with Mike Mondo from OVW. We trained together and he’s just another great guy.”

Johnny Ova was listed in the 2003 edition of the PWI 500. “It was shocking,” Ova admitted. Ranked at 438, Ova was more content with his wrestling ability than ever before. Since then, Ova has had an entire year to hone his craft. This year he is proudly listed as 394. With a recent booking in OVW, it seems that Ova’s rank will only continue to get better and better.

Johnny Ova is not only a talented wrestler, but a minister as well. Along with manager/agent, Bobby Reidel, Ted Dibiase, and others, Ova goes to churches and speaking engagements to preach the importance of God and religion. They combine wrestling/religon to create shows such as Ted Dibiase’s PWA events. “Whoever can find where it says that you can’t have a ring in a church, I’ll give them a thousand bucks on the spot,” Ova said. “The Bible says to go out and be fishers of men. In order to fish you need bait. What’s wrong with professional wrestling?” Ova thanks God everyday for his blessings. He also laid out an open challenge, to debate with any atheist the validity of God. Having recently debated with Riedel and DiBiase on a NYC radio station against the President of the Aetheist Coalition in San Franciso, Ova is undefeated in his debates thus far.

Through ministering, Ova and Reidel were able to come across the paths of many Born Again Christians. “We do the same work that Mike Seaver (Kirk Cameron from Growing Pains), and his tag team partner, Ray Comfort do. Bobby and I were invited to spend five days with Cameron in California to get further training in how to evangelize more effectively. However, due to a booking we were unable to go. Ova went on to explain how Cameron and Comfort do things the way Jesus did. “We also met with Soupy Sales, who did a TV show awhile back,” Ova said. Sales wanted to pray with Ova and Reidel, but when his daughter came over, Reidel and Ova left, then prayed that they would get the right opportunity to speak and pray with him. “As we were checking out of the hotel, Bobby (Reidel) was putting Ted’s (Dibiase) bags in the car, while I was checking out the room. I turned around and I saw Soupy Sales. I told Bobby that it was our chance. We walked over, talked some more about his faith, and then he bowed his head and accepted Jesus Christ as his Savior. That was such an amazing moment right there.” Reidel and Ova also share a relationship with Tammy Faye Bakker Messner, and her son, Jay Bakker, in spreading the message that God loves the outcasts and the unloved of society.

Looking forward to many more years in the wrestling business, Johnny hopes to meet up with the likes of Shawn Michaels, Bad News Brown, Sting, Jacques Rougeau, Ricky Steamboat, and Rick Martel. As for the indy level, he just worked an 18-minute match with AJ Styles in Orlando, and has two matches seen on video and Canadian TV with Petey Williams, and another with Chris Sabin in a ladder match.

Since his early starts as a young man facing a big world of wrestling, Ova has learned many different lessons. In life, it’s not the size of the man in the fight, it’s the size of the fight in the man. He dealt with the hardships of losing his father. As a friend, as a minister, as a wrestler, or as a person, Johnny Ova is an inspirational and talented young man. With the help of God, Bobby Riedel, and Ted DiBiase, Ova has found himself, and now has a mission of spreading the good news.