The rich, full life of Sandor Kovacs, a former wrestler and promoter, came to an end on Wednesday evening, June 30th, when he died at the Lakeview Nursing Home in Vancouver, BC after a long struggle with Alzheimer’s disease. He was just a week shy of his 84th birthday.

Kovacs was born in Hungary and came to Canada when he was about 10, living at different times in Oshawa, Guelph and St. Catharines. He didn’t know any English and had to learn quickly. An introduction to Greco-Roman wrestling when in school in St. Catharines under coach Cliff Chilcott proved to be a universal translator.

He joined the Royal Canadian Navy during WWII and became an officer, stationed in Halifax. Kovacs’ love of wrestling helped keep him out of combat overseas. “His commanding officer was intrigued by the wrestling bit, so he wanted to keep him there, which was okay with Sandy,” recalled his wife of 45 years, Betty, a few years back.

While in the Navy, he met Stu Hart. Kovacs tried different work after the War ended, including working in an auto factory, and as a tool and dye maker. But his mind drifted back to Hart and his determination to go to New York to make it as a pro wrestler. Kovacs followed his new friend to the Big Apple, and took a room with Hart and an Englishman who would wrestle as Lord James Blears. [See Stu Hart, the wrestler, circa 1946 for an account of their time together.] Sandor also met his first wife in NYC, though the married was short-lived and produced one son. 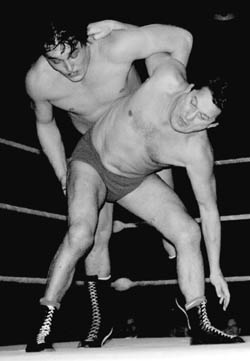 Wrestling took Kovacs around the world, and throughout North America, though he was never much of a heavyweight, struggling to get to 220 pounds on his 5-foot-11 frame. On the way, he met a ballerina from Montreal named Betty who would become his second wife. Betty recalled Sandor as “a very, gentle, intellectual type.”

“When I met him, I didn’t want to meet these brawn guys. I was a snotty ballerina. They just seemed like awful musclemen. But when I knew he was reading Spinoza, it changed my mind,” she said with a chuckle. The fit was a good one, as Betty was comfortable with life on the road. “We lived in the States, actually, more than Canada. I had done the same thing as Sandor. I was a gypsy. I was a dancer in the shows in New York.” Over the years, Betty even worked with Sammy Davis Jr. and Harry Belafonte. She is now the president of the Vancouver Ballet Society.

Sandor Kovacs was definitely different than the average muscle-bound grappler. “He might have been a little bit of an elitist, compared to the other guys. He loved opera, ballet. He was more of a classical guy,” Betty said, adding that he would often go to the opera with the likes of Lou Thesz and Yukon Eric.

“Sandor was the quietest one of the three of us. He wasn’t quiet, but he didn’t say anything unless it meant something. But he was very, very intelligent and a nice person. Stu was a good guy too,” recalled Blears, who had Sandor as the best man at his wedding.

Don Leo Jonathan first met Kovacs in New York in early ’50s. “He was a pretty good performer,” said Jonathan. “He was a bit older than myself. He was in a different clique around the wrestling office. I know when we went to Montreal around that same time, he was, I know he was helping Eddie Quinn with the book occasionally.”

Kovacs would find success in many territories, holding the NWA Hawaiian tag titles with Johnny Barend in 1955, the NWA Pacific Coast tag titles with Enrique Torres in 1956 and the NWA Canadian tag belts in Vancouver with Dan Miller in 1962.

“I don’t think Sandor ever had a nickname. He was always the clean-cut guy who got stomped by villains who resorted to dirty tricks and despicable conduct,” wrote Jim Taylor in the Vancouver Province in 1985. “But he made a good living at it until 1969, when he wrestled for the last tim ein Japan, noticed that it was taking three or four days longer than it used to to stop aching, and decided there had to be a better way.”

Betty Kovacs recalled the decision to homestead in Vancouver, where Sandor helped promoter Cliff Parker with the book, and the eventual chance to buy into the promotion there. “We had a son, and he was turning school age, and we were still gypsying around … it was time to put this child into a regular school. So we arrived in Vancouver after doing a stint in Calgary. We arrived in Vancouver, and were really en route to Hawaii. We had been to Hawaii before we had this child and loved it. But I felt a little isolated on the island, so we decided to stay in Vancouver. We thought this is very pretty, a growing city, it was very nice. So we settled here.

“About two years later, the business came up for sale. So we borrowed a bunch of money from the bank, and off we went. He bought it with two partners (Gene Kiniski and Don Owen).”

Dutch Savage was one of the wrestlers who worked for All-Star Wrestling in B.C. “Sandor was a true gentleman. He was the brains behind the Kiniski-Cliff Parker-Rod Fenton (promotion) but nobody knew that because they had him refereeing. But Sandor, he was a brilliant, brilliant guy. He could get more heat with just individual matches, no run-ins ever, ever in Sandor’s matches. It was just individual people, the way manipulated the territory, six, seven months down the road he had a program going. He was just brilliant. Gene Kiniski was smart enough to bring him in as a partner … Gene was the worker, Sandor was the brains. To this day, I respect Sandor Kovacs.”

With a hint of whimsy in his voice, the Mormon Giant Jonathon recalled his younger, brasher self and an old-school opinion of promoters like Kovacs. “You know when you’re younger, you’ve got your own agenda on the front burner, and there’s a lot of people you don’t pay the attention to that you do when you get older. He was there, he’d give me my bookings, and tell me what ferry to catch, what airplane that he’d prefer that we’d catch, what time to be there. If you made money, he was a great guy, if you wasn’t, he didn’t know nothing! … Just like every booker I’ve ever known!”

In the Taylor column, Kovacs himself explained his thoughts on promoting. “Wrestling … is entertainment. People go to matches to be entertained, and they get their money’s worth. They can believe whatever they want, but they are entertained. Otherwise, they wouldn’t keep coming back.”

Sandor Kovacs sold out his end of the All-Star Wrestling operation to Al Tomko in 1980. He would later serve the WWF as the promoter in the area, arranging the arenas and appearances.

Away from the ring, Kovacs was active as well. In 1975, his wife Betty opened up a dancing school, and Sandor served as the bookkeeper for the operation. The couple also raised polo ponies. Sandor was an ardent balletomane and theatre-goer. He even helped out in some plays, coaching actors, including the Vancouver Playhouse production of Terrace Tanze, and the UBC production of Shakespeare’s As You Like It.

The last few years were not pleasant ones for Sandor, or for those who loved him. His body gave out on him over time, first with a heart attack, then Alzheimer’s.

“He had a very bright business mind. But he took quite a few blows. It does take its toll. Alzheimer’s is hereditary in his family, so it’s a combination of hereditary and the bumps,” Betty said in January 2002. “He’s got so much arthritis. His body is riddled with arthritis, because he never got a new knee, which he should have. But he hated operations, so he never got the new knee, and now he’s really suffering with that knee.”

Jonathon recalled one of the last times his talked to Sandor. “The last time I talked to him, you could get him on a track, he could just come straight through. But he may call you a half hour later and forget that he’d called you!”

“Sandor’s having a hard time now,” said Dutch Savage in February 2002. “He remembers a lot of the old stuff, but his short-term memory is completely gone. … He’s a great friend and I really feel terrible that he’s in the condition he’s in. That Alzheimer’s is nothing to wish on anyone.”

Sandor Kovacs is survived by his wife, Betty, his sons Sandy Jr. of Boston, Greg of Seattle, and sisters Ida, and Betty of St. Catharines, Ontario, as well as three grandchildren.

Respecting Sandor’s wishes, there will be no service of any kind. In lieu of flowers, the family is requesting donations to the Vancouver Ballet Society, Sixth floor, 677 Davie Street, Vancouver, BC V6B 2G6.