VANCOUVER – Sandor Kovacs was a proud wrestler and a dedicated promoter, but he also loved a good party with friends and family. These three facts all came together on a very rare afternoon June 25th at the Shark Club in Vancouver where the Sportsmen’s Tribute to Sandor Kovacs was held. 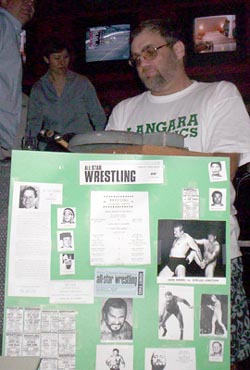 A 10-bell salute to Sandor Kovacs is rung by Vince Kreiser. Photos by Fred Johns

The Shark Club is one of the premier sports bars in North America, yet the Sandor Kovacs tribute show was not a typical event for the venue. Waitresses and regular patrons of the bar were caught looking quizzically as big men with grey hair and scarred foreheads filed in. Posters of Kovacs himself were displayed on the walls and a special table had been set up with pictures of Kovacs from his days in the Navy to the last photo of him ever taken back on May 24, 1999.

And then there were the ballerinas, friends of Sandor’s wife Betty, who had come to pay tribute to a man for whom they held great respect. There were others of course — lawyers, journalists, businessmen and women, even wrestlers currently active on the local scene were in attendance as well. In all, over 100 people came to pay tribute to Sandor Kovacs — a man many that night called the most gracious and honest they had never met. It was truly something special.

“It’s great to see so many people here,” Mick Sahota, the organizer of the event, said in the early moments of the tribute. When Mick, Betty and friend Ray Clark began working to make the tribute a reality, they had no idea who would come or how many. Sandor had insisted that there be no funeral after his death, only a party with a few friends. That, it turned out, would be impossible — Sandor had simply been too likeable and charming to keep people away. Instead, veteran wrestlers he had shared both the ring and the road with came to the event — slowly, and with some difficulty perhaps — but come they did.

Historic wrestlers like Moose Morowski, Don Leo Jonathan, Butts Giraud, and John Quinn were all present. Dutch Savage, a good friend of Sandor’s and a wrestler himself was unable to attend, but sent along a letter to be read to everyone.

For those that could make it, however, the event was nothing short of magical. After some opening remarks by Mick Sahota, Jeff Sim, a piper for the Delta Police Band, began playing his bagpipes to begin the wrestlers parade, leading the former wrestlers from the front door of the club to the spot next to the large Sandor Kovacs posters. Bar patrons looked up from their beers, many of whom had no idea who any of these men were but still seemed moved all the same. 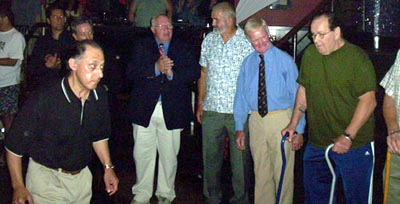 Some of the wrestlers gathered at the event.

When the wrestlers were assembled in a straight line facing those gathered to pay their respects to Sandor, Master of Ceremonies Tom Lucas declared the start of the ten-bell salute. Vince Kreiser then raised a tiny hammer and rang an actual ring bell from the Victoria Memorial Arena. As he gently hit the bell ten times, the bar suddenly seemed quiet.

A rare moment on a Sunday afternoon.

Then it was on to the tributes themselves, where the wrestlers shared some of their memories and stories of Sandor. Moose Morowski related how when he arrived at the Shark Club earlier, he walked over to the tribute table with all the pictures of Sandor and stared at them. “I finally beat you,” he said to them. When Tom Lucas asked Moose what he meant by that, he said, “Sandor’s got one cane; I’ve got two!”

Don Leo Jonathan, a former tag team partner of Sandor’s, was up next. He too had a cane with him and spoke with the crackle of an older, wiser man. He related a story about Sandor, back in the days when the two were young men in Montreal trying to make a name for themselves.

“Sandor said, ‘I’d sure like to main event around here’,” Jonathon told the audience. “Back in those days, the bookings were all in the office on a gray sheet of paper with all the names of the matches on it. So Sandor said, ‘I know how we can get in the main event.’ He took a pencil and erased all those French names and put some English ones on instead.”

When the audience finished laughing, Butts Giraud read something that Dutch Savage had written since he was unable to attend the event himself. “The only people who I can think of that didn’t like Sandor, were malcontents and guys who couldn’t cut the preverbal mustard in the ring,” Savage wrote. “Whether most will admit it or not, I will. Sandor was a bigger part of my success than anyone else in the business. He always, and I mean always, had time for me and Sandor appreciated the few talents I had learned. The wrestling world has lost one of its bright and shinning stars now that Sandy is gone. We will not see his like pass this way again. Sandor will always be imitated, but, he will never be duplicated, he was one of a kind. My hope is that all of you guys at this Memorial Tribute, and those who couldn’t make it, will remember Mr. Kovacs, (heavy on the MR.), and tell your grandkids about this fine gentleman, who helped you in your careers whether you deserved his attention or not.” 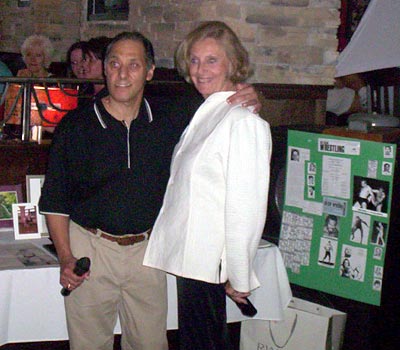 Then, Betty Kovacs took the microphone, clearly beaming after all the touching things that had been said about her late husband. “What can I say that hasn’t already been said?” she asked. “Sandor was a wonderful husband, a loving father and a true gentleman. What more can I say?” The audience — out of respect for this strong, wonderful woman — applauded thunderously, forcing some patrons to look away from the television sets with the football game on, wondering what was going on. Sandor could still create a buzz.

There were other tributes of course, written in ink in the guestbook Betty had provided. Everyone in attendance signed the guestbook, adding their own short tributes to Sandor. “For the best promoter of them all,” one entry read. “Sandor would have loved this party with so many friends,” another one said.

Tom Lucas thanked everyone for coming out and invited them to stay and enjoy a burger and some drinks. So everyone did, sitting around with people they had not seen in years or had never even met before. Currently active wrestlers talked with the retired legends; wrestling fans who had only seen these same legends on television took a moment to get some of their autographs. And high school students like Michelle Yee-Lim took some time to learn about the past.

Michelle was the winner of the Prostar Sandor Kovacs Memorial Scholarship and had come to the event after receiving an invitation from Betty. “I was very honoured to get invited here today and to win the scholarship,” she said. Two weeks ago, she had no idea who Sandor Kovacs yet she had come to the event and volunteered to help out with the 50/50 draw to raise more funds for the scholarship fund. It only seemed natural, she said. “Sandor sounds like a really nice guy.”

As the event winded down, Mick Sahota was asked how he thought it all went. “I think it went great,” he answered, refusing to take any credit for the success. “It’s just the way you are supposed to do things. Whether it’s 5, 15, 50 or 100 people present, everyone should be happy.”

Everyone was. The event went so well that Mick is thinking of making it an annual happening. As evidenced by the crowd on hand for Sandor’s tribute, there are plenty of men and women deserving of special recognition. The decision on that isn’t final yet, but regardless, Sandor’s legacy will live on through the scholarship in his name.

After the event was over, the pictures were put away and the guestbook became a historic document. All that remains of Sandor now is the memories he left with those fortunate enough to have crossed his path. For he left them with a lasting impression of class, honesty and the gentle spirit which belied his great yet subtle strength.

But on the afternoon of June 25, 2005, there was simply a celebration of his life and of his character, between friends, family and a few strangers who gathered in one noisy room to share stories and remember the good old days. Nobody cried for him and no one hung their head in sorrow. Instead, they just remembered his life over a few beers.

Sandor would have liked that.