There aren’t too many people around today who can still recall the wrestling days of Stu Hart. However, over the years SLAM! Wrestling has been fortunate enough to have talked to a few, namely Lord James Blears, Angelo Savoldi and Lou Thesz.

Hart got involved in pro wrestling in New York City under the tutelage of Joe “Toots” Mondt. Most of the names that he worked against are no longer with us, names like Baron Michele Leone, the Dusek brothers, the Zaharias brothers, Bibber McCoy, Rebel Bob Russell, Dutch Hefner, Buddy Rogers, The Angel and Bobby Stewart. 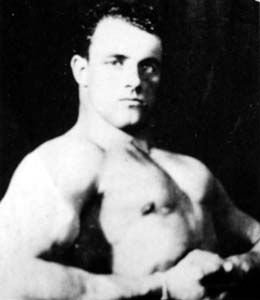 Sandor Kovacs and Stu Hart knew each other in the Canadian Navy, and hooked up again in New York City when Kovacs was also convinced to join the mat game. “I knew Kovacs in the Navy. I used to wrestle in the Navy, raising funds. So Kovacs, he was one of the guys I chose to work out with in the Navy. I brought him down to New York,” Hart explained in 2002.

The third man into the triad was Lord James Blears. “Kovacs and Stu and I, we were all brought to New York by the promoter unbeknownst to each other,” said Blears in 2002. “I didn’t know Stu Hart, I’d never heard of him. I’d never heard of Kovacs. I came from England, and we all went up in the elevator to the office. I said, ‘Hey, I’m Blears.’ Kovacs, Stu Hart. That’s when we began, 1946.”

According to Blears, a home base was essential. “We had to get an apartment. In those days, you had to have a base. We found a place at 101st Street. It was a nice building and we got what they called a railroad apartment.” (Essentially that meant that it was a long apartment, with a toilet as you entered, then a room, then another room, the living room, then the balcony.) “We shared the rent, $45 a month. Back then it was a lot of money.”

The three lived together for six or nine months. “Sandor was the quietest one of the three of us,” said Blears. “He wasn’t quiet, but he didn’t say anything unless it meant something. But he was very, very intelligent and a nice person. Stu was a good guy too.” Ironically, all three ended up marrying New York girls.

“I was with him when [Stu] met Helen on the beach at Long Beach,” said Blears. “We used to go on the weekend. I used to love to swim in the ocean. In summer, I got to New York in March, April, when summer started coming, we used to go to Long Beach, Long Island. That’s where I met my wife!” (Kovacs is the only one whose marriage didn’t last. His second marriage to Betty from Montreal has lasted 45 years.)

Over the years, Blears always meant to travel to the Stampede Wrestling territory to compete for his old friend Stu, but never got around to it. “It’s sad in a way. I was in, where the hell was I? I was in … I was somewhere. I said, ‘Stu…’ I was going to England, to Europe to wrestle. I said, ‘When I come back, I’ll come back through Montreal then I’ll come through and wrestle for you for a couple of months. He was all excited about that. But it never worked out. They booked in Florida, then I went to California … so I never did wrestle in that part of Canada, unfortunately, because I would have liked to. Stu was a good guy.”

Angelo Savoldi and Stu Hart go back to 1946 when Stu first went to New York. Savoldi was the one who picked him up when he’d arrive in town for some matches. They were reunited again at the Cauliflower Alley Club reunion in Las Vegas in February 2002, and Savoldi recalled working with Stu then. “I wrestled Stu many, many times,” he said. “I remember him when he came out of Canada. He came to New York City in 1947, I believe it was. I wrestled him in New York, Delaware, Jersey. He was a good, good wrestler.”

In his chat with SLAM! Wrestling in February 2001, the great Lou Thesz was asked about fighting against Stu. “I wrestled Stu when both he and I were 17 years old in Minnesota somewhere. Later, we became very good friends when he was a promoter,” Thesz said.