Road Warrior Hawk, one half of The Road Warriors, the most dominant tag team of all time, died early this morning in his sleep. Hawk, whose real name was Michael Hegstrand, was 45 years old.

He had been in the process of packing up and moving out of his condo with his wife, Dale. At about 8:30 p.m., he complained about feeling extremely tired, and went to lay down. Believing that his exhaustion was due to the move and the excitement of the impeding move to Tampa, Florida, she didn’t think anything of it and found him dead hours later. 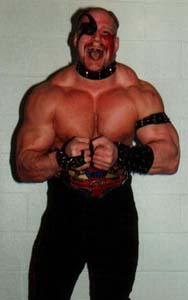 Hegstrand and Laurinaitis grew up in Chicago, meeting originally at age eight and becoming fast friends. At age 15, Laurinaitis’ family moved to Minneapolis for work, and a short while later, Hegstrand’s family did too.

The pair used to lift weights together in a Minneapolis gym. They were discovered by wrestler/trainer Eddie Sharkey in a restaurant, and Sharkey agreed to run a training camp. Laurinaitis, 6-foot-2, 285 pounds, debuted first as The Road Warrior in Georgia, a name and image derived from the Mel Gibson film of the same name. The 6-foot-3, 245-pound Hegstrand’s first matches were actually in Vancouver for the All-Star Wrestling promotion, working under the name Crusher Von Haig. He drove to British Columbia from Minnesota with fellow Sharkey trainee ‘Ravishing’ Rick Rude, and left because he was homesick.

“I originally had my first three matches in Vancouver and puked after each one. I was not in wrestling shape,” Hawk told Mike Parker of WrestlingEye.com in September 2001.

The pair reunited in Georgia as a tag team, and booker Ole Anderson decided to set them loose. The Road Warriors decimated opponents and had no equals. It was partially to hide their inexperience, but the domination made for a memorable run.

The team was initially managed by “Precious” Paul Ellering as a part of his stable called The Legion of Doom, which also included The Spoiler (Don Jardine), and Jake Roberts. The moniker, Legion of Doom, later became synomous with the Road Warriors team itself.

“I have never seen wrestlers as completely vicious and overwhelming as these two men,” Gordon Solie is quoted as saying in The Pictorial History of Wrestling. “Besides being tremendous athletes and incredible specimens, they have developed a bent and twisted attitude, rolling roughshod over everybody.”

According to an interview in 1992 that he did with Wade Keller of the Pro Wrestling Torch, Hawk and Animal didn’t know that they were going to be a major force in pro wrestling. “It took two years before we realized it,” said Hawk. “We were hot from the beginning. It would have never happened without the guidance of Paul Ellering.”

Unlike most wrestling managers, Ellering was a legitimate manager for the Road Warriors, booking their matches, lining up their flights, setting up hotel reservations and keeping track of their expenses.

From there, the Road Warriors hit the road and never looked back, winning the AWA, NWA and WWF tag titles during their career, along with the NWA World Six-Man titles with Dusty Rhodes on two occasions, and once with Genichiro Tenryu, and the NWA International tag title.

In 1992, Hawk abruptly left the WWF, unhappy with his pay, the time on the road and his treatment. He lessened his schedule and took more Japan bookings, including a stint as The Hell Raisers with The Power Warrior (Kensuke Sasaki), which resulted in two IWGP Tag Team Titles.

The Road Warriors later re-teamed in 1996, and agreed to re-join the WWF in 1997. The team was re-launched a year later at WrestleMania XIV in Boston as LOD 2000, managed by Sunny. Up next was a new member of LOD in Darren Drozdov, and Hawk was booked as ‘high and intoxicated’, leading to an 80-fall from the TitanTron.

Funeral arrangements for Hegstrand are not known at this time.