No Mercy for WWE fans

A family dog is smarter than the entire management and booking staff at Titan Towers. Wanna know why? Because when a dog does something wrong and is disciplined, it eventually learns from its mistakes. The WWE as a whole never does and apparently never will.

Fans have voiced their displeasure with the direction of the WWE product for what seems like ages. Even lifelong fans have found other things to do Monday and Thursday nights when the WWE’s flagships shows air. They have stopped buying their pay-per-views. They’ve shied away from house shows. Amazingly enough, the protest has fallen upon deaf ears. Arrogantly ignoring the advice of the wrestling community on how to set things right (i.e.: ditching the separate Raw – Smackdown! promotions) the company continues on with its leisurely suicidal death spiral. Any other company would’ve heeded the marketplace and instituted changes to somehow desperately win back their fans. Unfortunately, we are talking about the WWE here. A company that thumbs its nose at the marketplace with one hand while hammering the final nails in its own coffin with the other. Go figure.

A family-run entertainment business that once respected its viewers has evolved into the personal playground of its egomaniacal owners and operators. It all began with the Steve Austin – Vince McMahon angle and it has been all downhill from there. Even though it is clear that fans don’t want the McMahons to be the focus of WWE’s storylines, they insist on putting themselves in the spotlight and pushing their irritating, one-dimensional on-screen personalities onto a disinterested public. The McMahons were the ones who brought pro-wrestling into the mainstream consciousness during the eighties. It is somehow only fitting that the McMahons also be the ones who kill off any mainstream interest and drive pro-wrestling back underground.

There is no better example of how completely out of touch and conceited the company is than last night’s No Mercy pay-per-view. How they have the audacity to charge their regular pay-per-view rates for the incessantly mundane monthly line-ups boggles the mind. The decision to charge that much for such a feeble product is an absolute insult and another reason why their fan base is steadily shrinking. 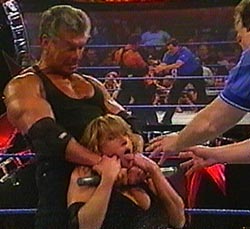 Vince McMahon chokes out his own daughter at the No Mercy pay-per-view.

It should be no surprise that company’s head master of disaster – Vince McMahon – wrote himself in as the star of the show. The broadcast was built around his laughable feud with daughter Stephanie McMahon and he alone brought about the conclusion of the main event championship match. In the ho-hum ‘I Quit’ match, Vince of course came out on top by choking out Stephanie with his trusty lead pipe and relieving her of her “general manager” duties on Smackdown. Heaving the ‘I Quit’ conditions and all storyline logic out the window, Stephanie lost when good old mom Linda McMahon couldn’t stand seeing her daughter suffer any longer and literally threw in the towel. After Vince threw Linda to the canvass for good measure and gave his “personal assistant” Sable a kiss for all her support (read interference) during the match, a confused Stephanie demanded to know why mom called it quits for her. This sets up Steph’s return following her real-life wedding to WWE star Hunter-Hearst Helmsley. Awww. How sweet. Announcers Michael Cole and Taz droned on and on speculating who the new Smackdown! GM would be. The proposition might be interesting if anyone actually cared.

Vince regrettably returned once again to foul up the Undertaker’s quest to become the WWE Champion and ruining ‘Taker’s best performance in the squared circle since he adopted the biker gimmick. Combining technical wrestling moves including a Dragon Sleeper and an innovative leg-lock submission move over the top rope with his bash ’em, crash ’em style, the Undertaker proved that even after all these years in the business (or maybe because of them) he can still deliver and hang with substantially younger talent.

In the Biker Chain match with WWE Champion – Brock Lesnar – you just knew that the storyline scribblers in the back were against ‘Taker though when he went to retrieve the biker chain off the steel pole and the lights in the arena mysteriously went out. With Vince’s fingerprints all over the strange occurrence, ‘Taker was forced to climb back down. Not breaking his stride, ‘Taker took Lesnar outside and piledrived him on top of what was left of the steel ringsteps. This brought about a healthy “Holy s–t!” chant from the crowd who evidently thought the move was more vicious than it actually turned out to be. Either that or the poor slobs have never witnessed an ECW match in their lives.

The said steel ring steps came into play with both men bashing each other with them. Lesnar powered out of a Dragon Sleeper to bring The Undertaker crashing down with an F5. Lesnar went to retrieve the chain but ‘Taker chokeslammed him off the top rope. At that point, everything Lesnar and ‘Taker worked for went down the tubes. The F.B.I. executed a run-in but were no match for The Undertaker who tossed them out of the ring and then flattened them with a REAL “Holy s–t!” move, a running head-first suicide dive or tope over the top rope. As ‘Taker clambered up the pole, took down the biker chain and wrapped it around his fist, Vince came up from under the ring and pushed ‘Taker off the top rope. Insert groan here. ‘Taker crotched himself and fell to the mat. Lesnar punched Undertaker with the steel chain and got the pinfall.

The next WWE pay-per-view is the Survivor Series on November 16th.