As my newsletter closed down in 1990 so I could start university, I thought my wrestling days were behind me. Yet, come 1995, and the beginnings of the Canoe.ca web site, I found a kindred soul in John Powell, who brought me back into the loop. With our common enjoyment of pro wrestling and desire to do challenging, innovative journalism, we launched the SLAM! Wrestling web site. 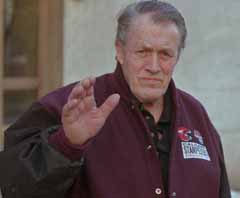 Backed primarily by the presence of Bret Hart’s Sharpshooter column from the Calgary Sun, SLAM! Wrestling began to find an audience. But it was Bret’s controversial departure from the WWF in 1997 that set the wheels in motion for what the site grew into.

On Wednesday, November 26, 1997, I conducted a Q&A with Bret in his Calgary home, only a short while after he had been ‘screwed’ out of the title.

But more importantly, that day I got to finally meet Ed Whalen in person, and go to the Hart House myself and sit and chat with Stu Hart for over two hours.

Two hours was hardly enough. Stu wanted to keep talking and I had a dinner date to meet. Stu was like that — talkative and friendly to everyone, and I’ve heard that repeated by countless people over the years. Even recently, fans would call up to discuss the old times and Stu would happily chat on the phone for hours. It was just impossible to keep him on subject.

The invitation down to The Dungeon is a treasured memory. It’s a dump, as often described. Stu lumbered around, showing me the weights, the mat, introducing me to a few of the wrestlers. He tried to get behind me and put me into a headlock of sorts, but I begged off, being a pencil neck geek and all. I also managed to dodge a few meaty, but light punches.

Instead, he sat on the weight bench and we were quickly surrounded by a number of students who wanted to listen to the master.

Chris Benoit remembered his first trip to The Dungeon for the Edmonton Sun in 2000. “Walking down there is very intimidating,” Benoit said. “I always imagined going down there when Stu was in his heyday. It must have been a scary place. He made me scream a few times.”

I didn’t see Stu again until the Cauliflower Alley Club reunion in 2001 in Las Vegas. By then, I had become much friendlier with the whole Hart family and it was a genuinely emotional moment for me to see him awarded the organization’s Iron Mike Mazurki Award, their top honour. As he rose to the podium from his wheelchair, ably supported by his family, so too did a lump rise in my throat. This was truly great man, loved and respected by all in attendance, getting his moment in the sun in front of his peers.

Sure it was nice that he was presented the Order of Canada, but I really believe that the Iron Mike Award meant more coming from the men and women he worked with over the years, some of whom he trained, others who lived in his house or worked for his promotion. He returned to the CAC in 2002 and again this past April, and I got to chat with him again for a bit. We talked about my own book, and his book (which I was fortunate to have been hired to proofread), and how great it was to see all the great wrestlers again.

Reggie Parks was one of those who owed his whole career to Stu. He met Stu in Edmonton, trained with him, was sent to various promotions by him. Parks once told me he learned everything he had to know about being tough from Stu Hart. “Stu’s tough because he’s good. He takes no prisoners. He didn’t teach you a lot of technique. He taught you how to be tough.”

Tough is a word that often comes up. If you read his book, you’ll understand how tough his upbringing was in Saskatchewan, how really incredible it was that he survived, prospered and flourished. Then to raise 12 kids with his wife Helen, who was equally tough too, but in a whole different way.

In another interview I did, Blackjack Mulligan raved about the greats, and the prestige that came from surviving the Hart training. “They talk about the basement of Stu Hart. That was a tattoo that you got. That was a learning deal that you went through that nobody ever went through. If you made it through Stu Hart’s school of learning up there and came out of that thing, you were known to be a product, a quality product because there were certain levels you had to do to be associated with Stu Hart and the Funks and the Gene Kiniskis and the Don Leo Jonathons. Giants of this business. There’s just no human beings around like those people anymore. They were my idols, and they always will be.”

I think that Mulligan really said it right. Giants of the Business. There aren’t many left.