Today, his Lake Hiawatha-based wrestling school is a breeding ground for hot talent. 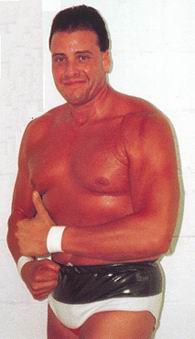 “I am proud of all of my graduates. They went through the course, they did what they were required to do, and they graduated,” Caruso told SLAM! Wrestling. “Some of the more popular wrestlers that are known from WWF, WCW, ECW, are “Crowbar” Devon Storm and Nunzio from Smackdown. A lot of our wrestlers have worked dark matches and have worked for WWE here and there. Guys who have worked for other promotions include, Mike Kruel, Johnny Thunder, Vic D. Vine, the list goes on and on.”

Training talent is mostly the deal nowadays, but that wasn’t always Gino’s job. Being a full-time wrestler, working a rigorous schedule, and being in pain was Gino’s calling. All the things that make up a professional wrestler. He never complained that wrestling was too hard or that he didn’t want to do the job, nor did he get involved in any backstage politics. Caruso worked his way to the top of the independent scene and has had the privilege of wrestling many legends.

“I have had the pleasure of being in the ring with such legends as Randy Savage, Ric Flair, Arn Anderson,” he said. “It was tremendous to learn from those guys and I try to pass on what I learned to young guys today.”

Since his beginnings in 1988 after training under Rocky Jones, Gino has wrestled for WWF, WCW, ECW, ECPW, NWA NJ, and many other independent promotions across the nation. He continues his wrestling and does his best to help out the newcomers and welcome them into the wrestling business.

Now a businessman, promoting one of independent wrestling’s hottest independent promotions, ECPW, Caruso gets to sit back and watch the action.

“Our thing is family entertainment. We are the way wrestling was 15, maybe 20 years ago. We cater to the family and that’s our niche in the business,” he said. “We are very sucessful with it. I don’t know of too many promotions that have a weekly TV show that airs in three different states. I don’t know of too many other promotions who last year ran over 50 shows in 5 different states. The last two shows we held, over 1,000 people attended. The Mayhem show we had 1,200 people and a week later in Jersey City we had 1,500 people.”

ECPW has also played home to many legends, the likes of “Hacksaw” Jim Duggan, The Big Bossman, The Missing Link, Koko B Ware, Brutus “The Barber” Beefcake, Greg “The Hammer” Valentine, Tito Santana, Larry Zybysko, David Sammartino, and The Masked Superstar, to name a few.

Caruso still laces up the boots every so often to grapple with a student or established star. But his passion today is training, and he offered up some advice to the youngsters dreaming of a career in pro wrestling.

“If you are serious about this and you really want to do something in this business, get to a school, learn the right way, don’t do it in your backyard, don’t do stuff that can get you hurt,” Caruso said. “We have a juniors program with ages 14-17 and an adult division which is ages 17 and older. Learn the right way, nobody is going to take your seriously unless you get trained.”