With the Canadian federal election out of the way, attention shifts to the United States, and its various elections set for November. Top of the card, wrestling-wise, isn’t the much rumored presidential run by Jesse Ventura but Brian Blair’s second attempt at the county commissioner’s job in Hillsborough County, Florida.

After years of coming oh-so-close to winning the WWF tag team belts as B. Brian Blair with partner Jumpin’ Jim Brunzell in the Killer Bees, Blair, a Republican, came out of his incredibly close loss (50.66% to 49.34%) in 2002 to Democrat Pat Frank for the District 7 county commissioner’s seat in Hillsborough County with resolve and determination. 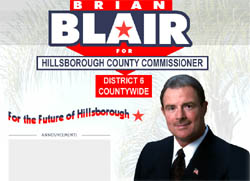 “I had the closest election in Hillsborough County history against a 10-year senator,” Blair told SLAM! Wrestling recently. Blair has been a resident of Hillsborough County since 1967, and lives there with his wife, Toni, and his sons Brett, 11, and Bradley, 8. He’s active in the community as a baseball coach and working with various charities.

County commissioner is the highest office in the county. “This county has more people than seven other states. We’re almost the same size as Rhode Island in land mass, Hillsboro County is one of the largest largest media markets in the nation,” he said.

The job would be quite varied. The county commissioner “does all the taxes, rates, fees, and you’re over all the municipalities. There are three municipalities here, Tampa, Plant City and Temple Terrace. We have 1,100,000 people.”

To compliment his wrestling web site, www.bbrianblair.com, which sells copies of his book, Smarten Up! Say It Right and videos through Wrestling Classics, Blair has created a more professional site for his political aspirations, www.brianblair.com. There, he explains his positions on various issues like Fiscal Responsibility, Public Safety, Growth and Transportation and Public Service.

He’s proud of the newest site. “This is a cool website if you’re into politics,” Blair said. But there are shout-outs to his career as a pro wrestler on the political site, too. In fact, Hulk Hogan is one of the people quoted on the site, endorsing Blair. “I’ve been a close friend to Brian Blair for about 25 years. Brian is one of the most well-liked and respected guy’s I know. Great work ethics – honesty and integrity are only a few assets he possesses. He’s a great family man as well. To know him is to Love him! He’s a natural leader for Hillsborough County,” Hogan is quoted as saying.

(Ever the politician, Blair smartly allows his wife to have her say on the site as well: “Brian is a wonderful husband and father. And he is a very humble person. Brian has made our family very strong through his faith in the Lord. I know my husband would make a County Commissioner we would all be proud of.”)

The months leading up to November’s election will be busy for Blair, but he’s used to that, having endured the rigorous travel schedules of the 1980s WWF.

“I’m not running against an incumbent,” he explained. “It’s my race to lose. I obviously don’t want to lose it, so I’ve got to keep running hard. The poll numbers all look really, really good.”