Growing up, a lot of teenagers want to follow in their parents’ footsteps. Some have aspirations of becoming a lawyer or doctor. Others want to be pro athletes.

All Gary Michael Cappetta ever wanted to do was be a part of the pro wrestling business. An avid wrestling fan all his life, Cappetta got his first big break while still in college. 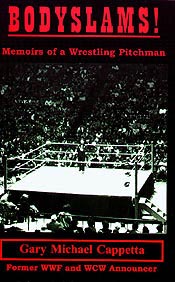 “It was a dream come true because I was a wrestling fan,” Cappetta told SLAM! Wrestling. “I began in the business because when I started to go to college, I was 21 and it became expensive for me so I needed to find a way to get into the matches for free. (laughs) ‘The Ring Wrestling’ magazine was one of the more legitimate wrestling magazines at the time and they were located in New York City. I took a ride in and managed to get a press pass… that was in March of 1974, so I began to write small articles for them and within four months I was covering a show (in New Jersey).”

“The WWWF (World Wide Wrestling Federation) at the time didn’t have a ring announcer and I volunteered,” continued Cappetta. “The next week, (the promoter) asked me to come back. I didn’t know at the time that Gorilla Monsoon was one of the owners of the WWWF He promoted New Jersey, Pennsylvania and Delaware. That fall, I started teaching school and he called me and asked me if I wanted to continue to work with him. I moonlighted for (a couple of) years. Two years later in July of ’76, they were in need of a ring announcer for their primary television program and they called me and I started to work it.”

Cappetta says he will always be grateful to Monsoon for giving him his start.

“Gorilla gave me my first break. He was a very decent man. He and Ernie Roth (The Grand Wizard), were two guys early in my career who treated me like a human being, treated me like an individual. A ring announcer very often is the butt of jokes and pranks. I was never treated that way and I think it was because of my association with Gorilla.”

After an 11-year stint with the McMahons, Cappetta left the WWF. He cites differences with Vince as the reason why he left.

“When Vince set his sights on going national, it was obvious that I wasn’t going along with the program because McMahon had a need to control the people that worked for him. And even though he had me by my heartstrings because I loved doing what I was doing, he knew that I was financially independent (because of my regular teaching job) and I was not dependent on a living by my wrestling work.”

Just before he left the WWF, Cappetta started to announce for Pro Wrestling U.S.A., a joint promotional venture in the Northeast by AWA promoter Verne Gagne and the NWA’s Jim Crockett.

“I would announce at the Meadowlands Arena one week for Vince McMahon and two weeks later I would be there for Pro Wrestling USA,” recalled Cappetta. “It amazed me that (Vince) never said anything to me about it. And after a couple of months, I became uncomfortable with it because as a guy who’s always played a second banana and a guy who’s never sold a ticket, the one connection I had with the fans was they believed what I said. Somehow there was this sincerity that translated whether I was telling the truth or whether I was feeding them the company line.”

“So I began to feel uncomfortable arriving at the Meadowlands, going into the ring and saying you’re going to see the best wrestling the world, when I was doing that for both promotions. So I stopped working for McMahon and continued with Verne because that was the summer he started his ESPN program. When he started it, it came out of the Tropicana Hotel in Atlantic City. It was local so I could still teach. I started dong his ESPN shows. I didn’t see a future with Vince and I thought there was a future with Verne and ESPN. This was in 1985.”

As it turned out, Cappetta’s run with Gagne ran only six months. McMahon went on to build a wrestling empire as the most powerful man in wrestling, and Gagne’s promotion died a slow lingering death before closing up in 1990.

Still, Cappetta has no regrets about leaving the WWF.

“There would have been no hope for me to have a relationship with them anyway because Vince felt he could not buy my loyalty. So, if he felt he couldn’t buy me, then my loyalty didn’t exist. It didn’t matter if he was king of the world, I wouldn’t have been a part of his kingdom, because he couldn’t trust me because he couldn’t buy me. It was all his perception. If he had asked me to come along and it was worth it, there was a good chance that I might have stayed.”

From there, Cappetta worked the independent circuit, as well as accepting the odd date for Gagne and Jim Crockett.

“I worked the (AWA’s SuperClash 3) pay per view which was the worst pay-per-view I’ve ever been involved in. It was a mess, it was just a horrible show. Verne always treated me well. Nothing personal against him, but he was just living in the fifties. In the book, I make the comment that Verne must have been really enamoured with the past because he continued to live in it.”

Cappetta began to work regularly for Crockett and gave up teaching to become a full time ring announcer in September of 1989 when WCW signed him to a contract.

Cappetta considers that first year full time with WCW as his favourite time in the business.

“From a pure wrestling standpoint, it was great. The Flair-Steamboat matches were some of the best I had ever seen and I was lucky to be sitting ringside for many of them. Those and the Bruno Sammartino versus Superstar Billy Graham matches of the ’70s were the ones I remember the most.”

While wrestlers have horror stories about promoters and bookers mistreating them and screwing them on their pay, Cappetta says he was always treated with respect.

“Gagne, Bill Watts, Gorilla….they were all treated me well. I had no problems with them. Jim Crockett was a little distant. I even enjoyed the time I worked under Dusty Rhodes.”

The one promoter Cappetta does not have kind words for is Vince McMahon Jr.

“He’s very arrogant. He’s a very insecure guy, which is where that arrogance comes from. Back when I was current with him, he was insecure because daddy was the boss. He has to be insecure if he has such a need to control people. In the 11 years that I worked with the WWF, he was a commentator, (in that time) he acknowledged my presence three times. That tells me something about the guy. I have respect for him in a lot of different ways, personally he’s not my kind of guy.”

“In the late ’70s before we could envision home video and VCRs, give him credit, he was ahead of the pack knowing that this was going to be standard item in people’s homes. He sent to a local arena show a stack of contracts for all the boys to sign, to sign their rights away for a penny. And most of the guys, I didn’t sign one, but most of the guys signed. So when Coliseum Video came out, they had no rights to anything. I just don’t think that a person needs to conduct business that way. I have a problem ethically with how he conducts his business.”

With the litany of wrestling biographies being released, Cappetta believes a Vince McMahon biography would prove an interesting read.

“I think the biggest challenge for any biographer would be to write a biography on Vince McMahon because you could go back to all his interviews and find different versions of his life that he has happily supplied whenever its convenient to serve his needs. But he’s a smart guy. When he was losing ground to WCW, he didn’t go out in the media and have his fight with Eric Bischoff, he wanted to have his fight with Ted Turner, because that only elevated him. He knew exactly what he was doing.”

Five years after leaving pro wrestling, Cappetta doesn’t keep in regular contact with anybody in the business. Instead, he maintains a certain level of distance from it.

“Wrestling, like other forms of entertainment, once you’re disconnected from the production, unless you have formed an uncommon bond, you don’t really stay in touch. People who have appeared on TV series (together) they don’t stay in touch, they go on with their lives.”

Cappetta does keep a close watch on today’s wrestling scene.

“I don’t watch every Monday night but I do know what’s going on. WCW sounds like it’s returned to the early ’90s and Vince has kind of outdone but returned to the mid 80s, with his version of popularity. I don’t approve of his product. I don’t endorse it. I don’t think T&A and vulgarity need to be a part of the program but it’s working for him, not that I think that it’s right, so I understand why he’s doing it.”

After being away from the business for five years and returning to teaching full time, Cappetta is happy that he’s out of wrestling and doesn’t envision a return.

“I would never say never. At this point I would say for the right price, which means it probably would never happen. To be honest with you, my heart’s not there but I loved it. I’m a very here and now kind of guy. I don’t miss it but would I do it again, sure… under the right circumstances.”